Review of Metallica: This Monster Lives

Metallica: This Monster Lives, the inside story of Some Kind of Monster, the documentary movie. Written by Joe Berlinger (the filmmaker) and Greg Milner. 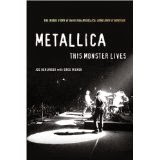 I gave this three and a half stars. This is about the making of the Metallica documentary called Some Kind of Monster. The primary filmmaker, Joe Berlinger, wrote the book, with help from someone named Greg Milner. I’d never heard of either of them but then I never pay much attention to moviemakers. I've seen the movie, though, and thought it was pretty good. This gives a lot more detail and gives information that couldn't be fitted into a movie.  Here's what I liked best, 1) the stuff about Metallica and the extra details that the movie didn't show, 2) the reasons why some material that was filmed didn't make it into the movie, 3) the way in which the material was often presented out of chronological order in order to show the "essence" of the story rather than an absolute straight ahead telling, and 4) the reactions of Metallica to the movie.

Other than the fact that I don’t really buy the “essence” comment, I liked all this material. Showing material out of chronological order is manipulating the material to tell a story in a certain way and to make certain points arrived at by the filmmakers. I understand why it’s done, for dramatic effect. Although Berlinger seems to feel strongly about the “essence” of the story concept, he admits that this is a selection process, and since they filmed thousands of hours and had to cut it down to movie length you can imagine that making such choices was pretty tough.

What I didn't care as much for: a lot of information given by Joe Berlinger about his previous documentaries and how much he grew as a person while making this one. I'm in no way, shape, or form a movie buff, or even interested in the whole field of film. This material might prove much more interesting to someone who is. It was well written and flowed with the other material for the most part. I just didn’t really care. My sole interest was in the band.

The one film-related thing I did find interesting was that Berlinger is the guy who handled the filming of Blair Witch 2, which was critically lambasted but which was actually far superior to the original Blair Witch movie. That movie was a completely faked documentary, or mockumentary. In other words, Blair Witch 1 was one of the silliest moments in film history. Berlinger talked about how he didn’t like the concept of the mockumentary and I absolutely agree with him and this upped my respect for him considerably. He also talked about how the failure of Blair Witch 2 triggered a long period of depression for him and made him think his career was over. I could sympathize with him here for sure.

All in all, I liked the book quite a lot. It was perhaps a little long, and I might have liked more selected pieces of dialogue from the band, but it was worth my time.
----
----

Posted by Charles Gramlich at 10:10 AM

Don't think I could read this one. I watched the film soon after it came out, and it held far more information than I wanted to know about the band's personal lives and their relationships to one another. Totally my fault. I got what I paid for. But sometimes, I'd simply rather not know.

huh interesting...i like metallica...saw them in concert...not sure if it is a book up my alley though....

Ty, I liked the movie OK. I will agree there were places with info I just didn't care to know. It certainly humanized the band.

Brian, I've been reading quite a lot of music related books the last couple of years.

I don't usually read this sort of thing. The Making of...never interests me. I, too, saw the band in concert. That's enough.

Randy, I don't watch those shows called "the Making of," but this book seemed interesting. I got a nice price on it as well.

Some writers mess with the facts that is, tangle them up to make their story more understandable or interesting, and I can see myself doing it one of these days.

Usually when writer starts to pepper a bio/non fiction topic with comments that have absolutely nothing to do with the topic at hand, that's when I stop reading.

Sounds like you were being overly generous with your rating.

Oscar, I'd say it's fine as long as you do indicate such things. I try to do when I take liberties. Of course, memory isn't perfect so I'm probably taking liberties I don't even know about.

G.B., well it was well written and had quite a bit of good info as well as some of the lesser interesting parts.

I don't think I have ever heard this group but the doc sounds interesting. SHOWTIME tends to carry docs about musicians. I will look for it.

I've worked on a couple of documentary films. During the process of editing, I noticed how much material couldn't get in, and became really cognizant of the selection process. To speak the plain truth, I started to think I could tell any of a number of different stories using that footage--most of them untrue.

Patti, It was released original as a feature film but I imagine other networks carry it now.

X Dell, that's about what I figured. How you cut it would determine the nature of the film. I figure this goes on all the time in reality TV

Odd the director chose to add so much of his own stuff. I'd only be interested in the band material as well.
A documentary on the documentary - doesn't that seem odd to you?

Charles, I have listened to Metallica a couple of times though i don't understand heavy metal much, but I think I'd like to watch the documentary. I have never read a book about filmmaking though I'm sitting on a review copy of a volume on films, including Hollywood, by a noted French director. I hope to write about it soon.

Alex, it did indeed. He said the publisher approached him so there wasn't originally a plan for it. Guess they figured on making money.

Prashant, heavy metal and hard rock is about the only kind of music I listen to. Although I'm not a huge music buff and don't listen to music much outside of when I'm driving.

I agree with you in being a bit dubious about the idea of "the essence" of a story being "the" essence ~ it's one angle, one refracted cube of many possible angles.

I suspect Berlanger is writing for a couple different crowds: Metallica fans, and fans of his film work. Those guys (he and Bruce Sinofsky) did the excellent documentaries about the West Memphis Three, which was a pretty big deal. I imagine fans of his film work would be interested to see how he approached this particular doc.

Not a Metallica fan, but who knows? Their lives may be more entertaining to me than their music.

Erik, you film that many hours, there could be multiple "essences"

Chris, he talked a lot about that West Memphis movie and I'm sure some would find that interesting. It just wasn't that much for me.

Riot, most of the time I'm not all that interested in the private lives of celebrities. Sometimes for bands I like that can be the case.

You hit every point in a review readers appreciate. The ones not hooked need go no further, and the ones enthralled with the aspects you outlined should scoop this one up.

Goog writing, but I guess I'm the second person here who's not a Metallica fan... After twenty years, way overrated.

Ivan, I liked their early stuff a lot. Lost quite a bit of interest after the Black Album.