Al About Story: Part One

Story is the way we make sense of the world. Take science, for example. You gather data. Some of it agrees with other bits of it. Some of it doesn’t. You gather more data. Eventually you make a story that connects the data. We call it a theory.

A “story” can be fictional or true, or it can mix the two together. A scientific theory is like that last option. At least some of it is true, or so the researchers believe. Though the parts we think are true today might turn out not to be true tomorrow. Researchers also know that some parts of a theory probably aren’t true, but they won’t find out what is or isn’t true until more data comes in.

Once in a while, to try to make sense out of a theory that has too many gaps, scientists throw in a known falsity. They call it a hypothetical construct. It serves its purpose to help the story flow smoothly, but it’s like a plot twist forced onto a tale by the author during the first draft. It never feels completely right, and hopefully it gets replaced during the revision process.

As the years go by and theories are tested, and as they pass those tests, they move closer and closer to being true in the final sense of that word. And they help us understand a very complex and chaotic universe by turning it into stories full of meaning and relevance.

We humans are constantly in the process of telling stories. Science is just one of type of story, though one very interesting to me. In future posts I'll explore a few other types of stories.
Posted by Charles Gramlich at 9:45 AM 18 comments:

Email ThisBlogThis!Share to TwitterShare to FacebookShare to Pinterest
Labels: All About Story, Science, theories

Fiddling around with a poem today. Not quite sure where it might be going. Here's what I've got so far.


I see the wolves of winter
in their glory,
wearing coats of blood.
As black eyes flame to blue,
they bare the teeth that
bring justice to the night.

I see the feral horses of hell.
I hear the saber rattle
of iron hooves on stone.
Their eyes roil with desire
to sow their foes destruction
and reap them of life.

Email ThisBlogThis!Share to TwitterShare to FacebookShare to Pinterest
Labels: poetry

The Kind of Thing that Makes my Job Hard

I grew up on a farm so I’ve dug plenty of ditches, put in postholes, hauled hay, chopped wood, chopped ice off the ponds, herded cattle, picked up rocks, planted garden, dug up gardens and plenty of other kinds of physical labor. I’m under no illusions that what I do today as a professor is anywhere nearly as tough. However, I also wouldn’t say it’s easy—at least much of the time. Just today I experienced another example of how my job can be tough, and how it is so often made a lot tougher than it needs to be because of others not doing their work.  Let me walk you through a frustrating moment of my exciting academic life!

At my university, I’m chair of a research committee that has to evaluate all research using human participants on campus. I get a lot of proposals to look at, averaging about 4 a week during the school year, and a whole lot more questions or requests for information. Around 85% of the proposals I get require some changes, although many times these aren’t very extensive. I’ve learned over the years to be very, very clear on the changes I require, because it saves me a lot of time.  The problem comes in when people either don’t listen to my requirements, or make mistakes in implementing them. Here’s an example from today, and—unfortunately—not a particularly rare example.

For one particular proposal, I required changes to three pages of a 25+ page document. These were mostly minor. First, I needed to have two lines removed from a document that the participants will see. Second, I needed to have a typo corrected on a part of their survey, so that the participants wouldn’t be confused by the wording. Third, I needed some clarification on a line from their proposal. The proposal was sent in Friday and I emailed them my requested changes Friday evening.

Today, Monday, the researchers sent an email indicating that they’d completed the changes I requested and the documents were attached. Here’s what I found.

First, the exact same page with the same two lines in it that needed to be removed. Nothing whatsoever was changed.

Second, they did indeed correct the typo. However, instead of just correcting it, they reworded the entire sentence. This rendered the sentence incomprehensible.

Third, no clarification of the issue from their proposal, which was the most important of the three.

This is not from students, mind you. This is from PhDs. And almost certainly this is a case of the researchers feeling overworked and trying to rush to get something done. I know they know how to make the corrections I needed them to make. But haste and carelessness do not go well together. The big problem is that it costs “me” time.

Had the researchers just made the corrections/changes I asked for, it would have taken me maybe three minutes to process it and get them their approval. Instead, I had to construct another email to clarify what I needed, to indicate the new problem introduced into the survey, and to ask once more for information I’d already asked for.  At least some of this I could copy and paste from original email. But it still took a lot longer than three minutes since I also have to keep careful records on all correspondence carried out for every proposal I see. That means quite a lot of additional paperwork for me. And we’re still not done!

Now, who wouldn’t want to go to school for umpteen many years so they, too, could have this kind of exciting academic adventure?
Posted by Charles Gramlich at 10:04 PM 20 comments:

Web of Gunsmoke, by Will Hickok

Will Hickock was a pseudonym of Chester William Harrison (1913-1994), although Harrison apparently only wrote three westerns under that name. Two of these were tie-ins with the TV show “The Restless Gun,” which I’ve never seen an episode of. The third was Web of Gunsmoke and I liked it very much. I will certainly be seeking out more Harrison works. He was apparently quite a prolific author who wrote under several different names, include Coe Williams and C. William Harrison. I’ve seen various statements that he wrote up to 1200 works, counting books and stories, but I’ve not found a breakdown of that and I haven’t been able to locate many of his works online other than his westerns. I haven’t had time to do any extensive looking, though.

In Web of Gunsmoke (copyright 1955), Curt Selby rides back into the town of Signal after several years absence. When he’d left, he’d been a reckless, heavy drinking young man. He returns sober and mature, but he finds that much has changed. His father, Hamp Selby, was the biggest rancher in the area but had always gotten along well with his neighbors. However, an aging Hamp has turned over the ranch to Curt’s half brother, Phil, and Phil has used guile and pressure to run those neighbors off and gain control of their lands. He’s hired a crew of gun toughs to back his play. Now, Hamp wants Curt to put Phil back in his place, but most of the townsfolk are backing Phil. There is, of course, a woman caught in the middle. She was once Curt’s girl, but now she’s pledged to marry Phil. 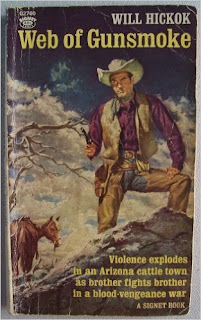 The plotting in this book is not its primary strength. There was a fair amount of what I call “backtracking” in the plot, where the character moves one direction, then has to reverse his/her direction to get back where they started. This often looks like the author is just shoving things around at random to get conflict and add length to the story. That may have been the case in Web of Gunsmoke, but it didn’t bother me tremendously and I felt the plot was certainly adequate.

The strength of the story lies in interesting characters, strong action, and very good writing. Hickok was very good in this book at sketching the backgrounds in quickly but effectively. He also was able to sum up emotional scenes dramatically and succinctly.

Here are a few examples: (Just assume the quote marks please)
1. The coin, the silver dollar, struck Selby in the corner of the mouth, bringing blood. It hurt.
2. “You forgot your drink,” Bannon said. “No,” said Selby. “I didn’t forget it.” He kept on walking.
3. He liked fine things. Fine whiskey, fine horses like this high-stepping black.

So, overall, this was an enjoyable book that has stayed with me for the week since I read it, and I think it’ll stay with me a while longer. The cover shown here, by the way, is from a different version than I have. My cover is the fourth printing from Signet Books. It’s mostly a kind of orange with a cowboy on the front. I like it better than the one shown here. It looks like it was done by the same artist who did a lot of Louis L’Amour covers from around that time. Couldn’t find the artist’s name listed, though.

Posted by Charles Gramlich at 6:30 AM 13 comments:

Since, too often these days, I’m not coming up with blog posts related to my own work, I thought I’d start doing some more posts where I highlight beautiful writing from others. I started here but have been doing most of this on facebook. For my selections so far, I’ve gone with writers like Ray Bradbury, Pearl S. Buck, and Peter Matthiessen, all recognized literary figures who are known for their good writing. But beautiful writing comes from all kinds of places. It comes from places that many literary readers might not suspect.

I’m not a literary reader. I’m just a reader. I read pretty much anything and everything. The following selection is from a writer who has had a big influence on my fiction interests, both reading and writing. It’s Robert E. Howard, a man who died young but who in a short time created several iconic characters, including Conan the Barbarian and Solomon Kane. Howard was a very fine writer. Here’s the opening of one of his “Crusader” stories. The tale is called “Lord of Samarcand.”

“The roar of battle had died away; the sun hung like a ball of crimson gold on the western hills. Across the trampled field of battle no squadrons thundered, no war-cry reverberated. Only the shrieks of the wounded and the moans of the dying rose to the circling vultures whose black wings swept closer and closer until they brushed the pallid faces in their flight.”

Posted by Charles Gramlich at 8:42 AM 16 comments: