For Halloween, and for a couple days after, my "Harmland" collection is free to download as an ebook at Amazon. This is a collection of noir and horror stories. There's over 20,000 words of material here, including such tales as "Whiskey, Guns, and Sin," "The Grey Inside," "The Finding," and others. 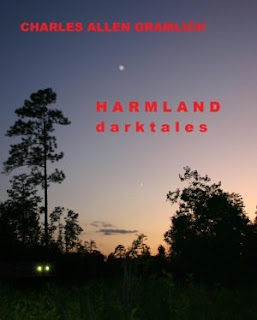 One of the stories, "The Toad," is about half autobiographical. You'll have to guess which half. There's also a Cthulhu Mythos story called "The Vivarium."

If you read ebooks, why not give it a download. And if you do read it, I'd appreciate a review, of course.

Download here:
Posted by Charles Gramlich at 7:49 AM 7 comments:

The Sirens Call, Issue 35, is out just in time for Halloween. This is a dark fiction, dark poetry ezine that has really good production values and a plethora of creepy/scary stories and poems. It's 144 pages of material, and is free to download. I have three poems in it, "In Wormwood Days of Wither," "Mother Cold-Eyes," and "A Hiss of Angels."

Why not check it out? It costs you nothing. And if you like it there is a place for comments at the publication site, which is here. You just have to click on the magazine cover at the site (not the one below) to download your free PDF. 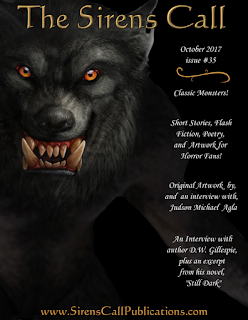 When a Book Goes Out of Print

Cold in the Light was the third book I wrote but the first to be published. Invisible College Press picked it up in 2002 an it sold modestly. Emphasis on the modestly. This is despite the fact that I believe it was, and is, a really strong thriller. I’m very proud of it.


In September of 2017 I received word from Invisible College Press that they were closing their doors, officially making Cold in the Light “out of print” as of October 2017. The question then becomes, what next?


I see two possibilities: First, I could seek out another small press publisher who might be interested. Second, I could self publish it. Frankly, because I believe it is really good, I’d like to try another publisher who might have more marketing sense than I apparently have. I’m going to take a bit of time to look around.


Another issue that has arisen though is whether I should update the book. My writing skills have, hopefully, improved since this book was written in the 1990s. I at first just assumed I’d update and started going through it. A problem quickly became apparent. The technology has changed dramatically since the book was published. And not only that, but the geographic setting has changed. When I wrote Cold in the Light, Highway 71 was the main route students took to get to the University of Arkansas. That is no longer true.


My alternatives then became, rewrite the tech and the geography, which will require considerable work, or simply set the book in the past time in which it was originally written. I already have times and days mentioned in the book so I could easily establish a year. What do you think of the latter idea? Have you read books like that? Do you care if a thriller is essentially set in the past? Or do you want your thrillers to be "torn from today's headlines?" Before I make any further changes to the work I need to make this decision. Any feedback would be appreciated.

Posted by Charles Gramlich at 9:28 AM 21 comments:

Email ThisBlogThis!Share to TwitterShare to FacebookShare to Pinterest
Labels: Cold in the Light, out of print

Contraflow #7 is going live this weekend, October 6 - 8, at the Airport Hilton in Kenner, Louisiana. That's part of the Greater New Orleans area for those who aren't familiar. This is a great con with lots of great guests and fun activities. I'll be there as a guest so I hope you can stop by if you're in the area, or going to be. I'll be there as much as I can, particularly on Saturday when I have most of my panels. Here's what I'm going to be doing:

Hope to see you there!

Posted by Charles Gramlich at 9:12 AM 14 comments: