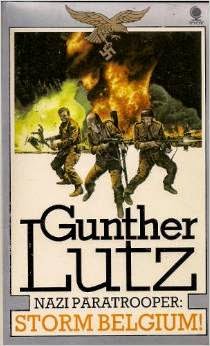 I'm afraid I didn't care much for this one. As the first in a series of WWII books told from the German point of view, it sounded interesting. The back cover blurb described it as "devastatingly accurate," and began with the phrase, "The invasion of Belgium has begun.”

I don't know about the devastatingly accurate part. It sounded accurate to me but I'm not an expert on this particular history. I've discovered that Gunther Lutz was probably Charles Whiting, who wrote many nonfiction books about WWII. I’ve read a few of those and generally rated them pretty highly. Thus, I can believe the accuracy statement.

However, the fictional story here was just flat out boring. It certainly didn't start with the invasion of Belgium. The book is only 186 pages long but we spent the first 125 pages following the paratroopers (Jagers) through training. There's one exciting scene during the training period, but that was it. There’s also a sex scene, which was OK and probably done to provide some “gritty” realism.

After the attack on Belgium actually began, around page 125, it concluded again after about twenty-five pages. The rest of the book was aftermath. The fighting itself was OK, though nothing to write home about. But by the time I got to it I didn't really care. Most of the characters also did not seem very realistic to me, although I liked the two main characters.

I’m sorry to say that I was very disappointed and won't be reading any more in this series. Whiting also wrote fictional WWII novels under other pseudonyms, including Leo Kessler, but I’m wary of trying any of them. I may continue to read his nonfiction but I doubt I’ll be looking at any of his fiction. At least not right away.

Here’s a quote from the section after the battle in Belgium began, and after the Jager's glider has crashed in the water. Note that it’s all one sentence.

“However, this mood of optimism was balanced by the continuing menace of the haphazard machine gun fire as the Belgian fortress troops continued to rake the mass of wreckage caught in the wing supports and control wires the shattered glider brought with it, besides turning their attention to two bodies that were now floating face down in the centre of the canal, drifting slowly away with the current at the centre of the channel, and pinkly suffusing the water as they did so.”

I’ll leave you with that. Not exactly compelling action.
Posted by Charles Gramlich at 9:42 PM

War novels have to be quite exceptional for me to take a look. Sounds like this isn't one of them.

Sorry that one was such a bummer. Little misleading about the Belgium invasion.

He needed the first 125 pages because the Battle for Belgium was nearly non existent. The blitzkrieg rolled right through and captured the zinc mines in less than a week. The government capitulated almost as soon as the first Panzer division came across the border, but then he couldn't really go on and tell you what kick ass resistance fighters they had.

Brian, it was a doozy.

David, I've enjoyed quite a few. Or I used to read them more. but this one didn't catch me.

Alex, yep, I was expecting it to start with the war action and then at worst have flashbacks to training.

Mark, yeah, I thought he'd have to drag the battle scene out. Didn't realize it was going to be written as if in "real time." :)

Charles, this sounds like the Sven Hessler book on WWII novel I read not long ago except the training and the actual war were far too brutal and inhuman to be accurate and yet I believe it was.

Prashant C. Trikannad said...
This comment has been removed by the author.
12:22 PM

Thanks for the review, Charles. I won't have to read it.

Prashant, even the training was really rather glossed over in this one. It didn't really give me a feel for the life of a Jager.

I don't think any of it would appeal to me except the sex scene.

Riot Kitty, even that was fairly pedestrian.

Yeah, it does look like he's used to writing nonfiction and not fiction.

Lisa, revenge sex is what the scene described.

I had almost forgotten reading Leo Kessler books, remembering now mostly "Assault Battalion Wotan" which became grimmer and grimmer when it moved to the Eastern Front. Which reminds me of the movie, 'Cross of Iron.'

Erik, I was hoping for something like Cross of Iron, which I love.