Well, finally something worth reporting here on the blog. For almost a year I've been planning on publishing a print version of my western short story collection, Killing Trail. I published this on Kindle and Nook several years ago but finally used Create Space to produce a print version. You'll probably recognize the cover image. Lana took this picture of me at the local Flatwoods nature preserve. Not a great cover image but it fit and I thought, "what the heck." 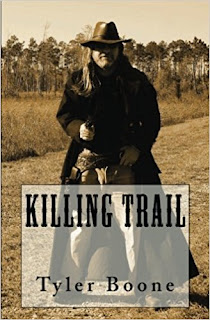 I dispensed with the "Charles Gramlich, Writing as Tyler Boone," subtitle and just put the pseudonym here, but everything is explained inside. I plan on more westerns under this name. Here is the back cover blurb (with the link):

RIDE INTO DANGER! Killing Trail is a collection of western short stories written in the action & adventure tradition of such authors as Louis L’Amour, Edgar Rice Burroughs, and Robert E. Howard. It contains:

Killing Trail: When they dumped Angela Cody on Lane Holland’s ranch she was scant moments from death. She managed to speak only a few words but those were enough to make Lane strap on his guns and ride out on a deadly hunt.

Showdown at Wild Briar: Accused of a murder he didn’t commit, Josh Allen Boone rode a long way from his Wild Briar Ranch. Now he’s coming home, and the real killers are waiting for him with a rope.

Powder Burn: They said Davy Bonner’s luck had run out and they ambushed him along a dark road. But luck or no, Davy wasn’t going down without a fight.

Once Upon a Time with the Dead: For the gray raiders, death was an old friend.

The work also includes two nonfiction essays, one about Louis L’Amour and another about the real Wild West.

The price listed on this is $6.99, but if anyone wants a signed copy you can let me know and I'll order some myself for that purpose. It should be a buck or so cheaper. Not completely sure how much cheaper.