Poetry from Yours Truly

I'm very honored to be July's Selected Poet over at The Horror Zine. I hope you will click on the link and head over for a look. Thanks to Jeani Rector and all the good folks over there. I much appreciate their efforts.

There are three poems, "River of Love's Dreaming," "Recipe for Disaster," and "Serpent Rain." I always construct notes about the evolution of stories I write, and sometimes I do this for poems, although in less detail. For what it's worth, here are the notes for these three poems below.

A River of Love’s Dreaming: Started in 2016. I was very happy with my poem R.O.A.D, River of Angels Dreaming, and so I decided to try something else in a similar vein. I don't think it's as good but I was pleased with it overall.

Recipe for Disaster: After reading some great poetry by Bruce Boston, I tried to create a similar kind of poem and this very short piece came out. I wrote an alternate version too and showed both to my writing group in 2016. They liked this the best. Bruce actually read this and gave me a suggestion for it, but it was already submitted at that point and so I wasn't able to incorporate his suggestion. If there's ever a collection that small change will be made.

Serpent Rain: Written in 2010 but I don’t remember much about it. That was a very stressful year. A lot of losses. I suppose it felt a bit like I was being punished and was hoping for forgiveness.

Thanks to everyone for visiting.

Posted by Charles Gramlich at 9:59 AM 12 comments:

Raymond Chandler: Killer in the Rain

Just finished reading Killer in the Rain by Raymond Chandler. This is a short story but it was given a kind of standalone novella treatment by Modern Classics. You can see the cover below. 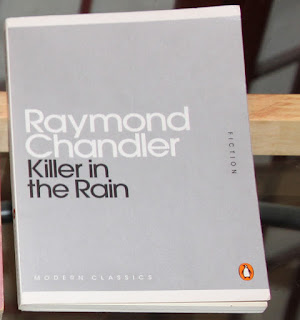 As I was reading this one I tried to pay close attention to Chandler's style, to see if could pick up on what makes him such an original and so often imitated. First let me say I really enjoyed the story. It captivated me as I read along. But what were the elements that lead to that captivation?

First, Chandler's writing is very simple and straightforward. There is very little poetry in his prose, unless one considers a certain starkness to be poetical. Second, the work reads like it was written quickly and was not revised very much, although I have no idea if that is actually true. I say that because I found various places where Chandler reused the same word in the same sentence or paragraph. I often do that in first drafts but usually try to change it as I revise. Third, there is almost no description of the natural world other than an occasional visual given of the sky or of rain. There is, however, a fair amount of description of man made objects within the story, such as the drapes or automobiles.

I found these three points interesting because, normally, I would say that I didn't like the way Chandler does them. I love poetical writing. I like polished prose. I love descriptions of nature and dislike descriptions of man-made materials. Chandler worked against all three of my preferences here, but I still enjoyed the read.

One might say, well, "Story is King." But the story here is not that compelling either. Basically, a mobster's girl is stepping out on him and he hires our "shamus" to take care of it. There's a couple of murders and a blackmail scheme, a couple of dames and a lot of whiskey. There's an hysterical woman who has to be slapped out of it. None of these are particularly compelling plot lines, although they certainly would have been much less predictable when this work was originally published.

The upshot of my analysis here is anticlimactic. I don't know why this booklet worked so well for me. Maybe other's have thoughts.