If you’re like this nearing 60-year-old, you may remember such great anthologies from the 1960s and 1970s as The Mighty Barbarians, The Might Swordsmen, Warlocks and Warriors, Savage Heroes, The Spell of Seven, Warlocks and Warriors, Swords & Sorcery, Swordsmen and Supermen, The Fantastic Swordsmen, The Barbarian Swordsmen, The Dark of the Soul, and the Flashing Swords and Swords Against Darkness series. These books were edited by such folks as L. Sprague De Camp, Lin Carter, Andrew Offutt, and Hans Stefan Santesson. They collected imaginative tales of sword and sorcery and heroic fantasy. Most included a story by Robert E. Howard, the father of the genre. I collected and devoured them all.


In 2018, along comes Robert M. Price, a well remembered name in his own right, to try and capture that fateful lightning in a bottle (or prose) again. I’m not sure exactly how the collection came about, but several authors well known in the S & S genre were persuaded to take part, including Adrian Cole, David C. Smith, and Charles R. Saunders, as well as quite a few relative newcomers. The collection contains eleven stories. Here is the TOC, followed by my thoughts:


"Spawn of the Sea God" by Adrian Cole


"The Corpse's Crusade" by Cody Goodfellow


"Thongor in the Valley of Demons" By Robert M. Price


"The Shadow of Dia-Sust" by David C. Smith


"The Secret of Nephren-Ka" by Robert M. Price


"The Temple of Light" by Milton J. Davis


"Kiss of the Succubus" by Charles R. Rutledge


"The Living Wind" by Ken Asamtsu, translated by Edward Lipsett


"The Last Temple of Balsoth" by Cliff Biggers


"Lono and the Pit of Punhaki" by Paul R. McNamee 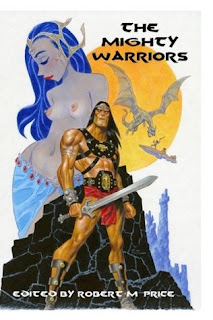 While interesting, the introduction by Price could easily have been expanded. I would have liked to have seen a little more historical context myself, but I understand that many readers just want the stories and don’t much care about the history. I’m not sure that’s the case for most of the readers who will buy this collection, but I understand the impulse to keep the intro brief.


I recall Adrian Cole first from a wonderful trilogy of novels set in his own universe (Dream Lords), but here we have him telling a story about Elak of Atlantis--"Spawn of the Sea God". Elak was invented by Henry Kuttner. I wasn’t the biggest fan of the Elak stories, since the character didn’t quite have the vitality that I associated with Robert E. Howard’s barbarians, but Cole does an excellent job of capturing the character and telling a fine, fun tale.


I don’t know anything about Cody Goodfellow. His "The Corpse's Crusade" is a tale of Zothique, which was invented by Clark Ashton Smith. Zothique is a continent of a future, dying earth. Again, I thought the author did a good job of capturing the sense of Smith’s Zothique. I liked this tale quite a bit with its twist of irony plot.


Next is Robert Price with a tale of "Thongor in the Valley of Demons.” Thongor is the creation of Lin Carter and was essentially a kind of mix between Conan and John Carter. He lived on the continent of Lemuria. Price has a whole collection of Thongor tales out called The Sword of Thongor. This is a new tale, though, not included in that collection. I have a soft spot for the Thongor tales and this is a worthy continuation of the character.


"The Shadow of Dia-Sust" by David C. Smith is a tale of Oron. In the late 1970s and early 1980s, Smith wrote numerous stories and a couple of books about Oron. I much enjoyed them and was very happy to see a new tale of the character. Smith was also one of the best of the Robert E. Howard pastiche writers of the 70s and 80s so he knows how to write a tale of high adventure.


Charles Saunders is best known for his tales of Imaro, a warrior hero of Nyumbani, a kind of alternate Africa. There were three novels originally of this character and I read and enjoyed them all. It was good to see a fresh Imaro story, "Amudu's Bargain." I believe this one has a slight edge as my favorite of the collection.


"The Secret of Nephren-Ka" by Robert M. Price is next. This is a story of Simon of Gitta, originally a creation of Richard Tierney, although based on the Biblical character of Simon Magus. These stories tend to involve more sorcery and less sword than I typically like, but Tierney was a very fine writer and, again, Price captures the character well.


Milton J. Davis is next, with "The Temple of Light,” a tale of his hero Changa. Changa is an interesting character, a literary descendent of Imaro, I should think. Very good writing and setting. Davis has other stories of Changa out as well.


"Kiss of the Succubus,” by Charles R. Rutledge, features his hero Kharnn. This one is set in the 1500s. Kharnn is a time traveling barbarian. This is a straightforward blood and thunder tale of a battle against a demon. Fun stuff.


I’ve read a little bit of Ken Asamtsu’s work before. He is a Japanese author. I haven’t read his work in the original language but the translations have been exciting and enjoyable. "The Living Wind" is no exception. Lots of sorcery in this one too.


Cliff Biggers was also a new name to me. "The Last Temple of Balsoth" featured a character named “Gondar.” Gondar is out for revenge, a not unusual motivation in sword and sorcery, but this was a really fun tale that could easily have been set in REH’s Hyborian age.


Finally there’s “Lono and the Pit of Punhaki" by Paul R. McNamee. I’ve been in an anthology with Paul and know him as a very fine writer. This was a great tale to end the collection, and with a unique setting among Pacific islanders.


All in all, an enjoyable collection of robust red-blooded tales of adventure.