It's been something of a dream of mine to work on a book series beside other writers whose work I value. Finally, it's come true. Late last year I was offered a chance to write a book for Wolfpack Publishing's ongoing western series, The Avenging Angels. I took the leap and am glad I did. That book is out now and is called "Avenging Angels: The Wine of Violence." 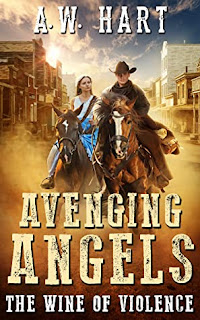 The house name for the series is A. W. Hart, but such writers as Peter Brandvold, Richard Prosch, Wayne Dundee, and Chuck Dixon have handled the reins. I got my chance with book #7.

The Avenging Angels series features twin brother and sister, Reno and Sara Bass, who become bounty hunters after their family is brutally murdered by outlaws. Their preacher father urged them to root out evil and they are doing it one bullet at a time.

In The Wine of Violence, Reno and Sara travel to the Ozark Mountains of Arkansas (my old stomping grounds), to uncover and stop a plan to build a criminal empire. Reno goes undercover in a town full of outlaws and finds himself caught up in a mystery. Is the preacher who leads the town a voice for good or a ruthless murderer?

In the end, Reno and Sara have to rely on their guns to survive the day. If you like action oriented westerns, this might be a book for you. The whole series is certainly worth reading. It would tickle me no end if you bought a copy and read it. And if you do, a review would be icing on the cake! It's available in both ebook and print.

Posted by Charles Gramlich at 6:50 AM 5 comments: