The Lost Empire of Sol

I cut my teeth on Sword and Planet fiction, first reading the Barsoom stories of Edgar Rice Burroughs, and then the many tales by those ERB influenced, such as Gardner Fox, Alan Burt Akers (Ken Bulmer), and many others. I consider S & P to be the purest form of adventure fantasy, and I've always wanted to write my own tales in the genre.

The first publishable book I wrote was Sword and Planet. That was Swords of Talera. I wrote four others in that series, and I've also written some S & P short stories. I'd say that, in general, I've never had more fun writing anything than writing this kind of tale.

A few years back, author Scott Oden had an idea for a shared world S & P anthology set in the era of the "Lost Empire of Sol." A number of writers got a chance to choose a world of our solar system to tell a story in this connected universe. I got my choice in early, and I picked Mars! What else would I have chosen? 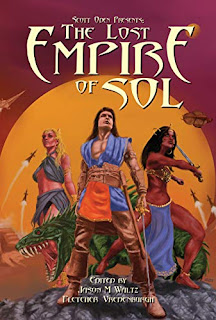 That book is now available for preorder at this link. This is a kindle version but there are plans for a print edition as well. I'm very excited to be part of this collection with my story, "A Sand Ship of Mars." I'm looking forward soon to reading all the other tales.

Email ThisBlogThis!Share to TwitterShare to FacebookShare to Pinterest
Labels: Anthologies, Sword and Planet

Guns of the West 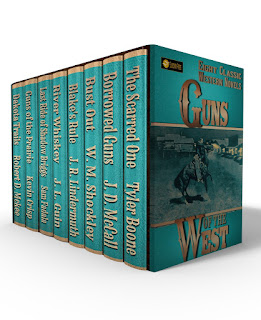 I'm thrilled to have my very first full-length western novel included in this handsome box set of 8 action packed novels of the west. Mine is "The Scarred One," under the Tyler Boone penname.

Published through Sundown Press, this collection is available on Kindle for only 99 cents. That's a lot of good reading for the money.

Here's the link to the books on Amazon.

And if you'd like to learn more about the other authors involved, check out Sundown Press's blog.