Drowning are the Dead 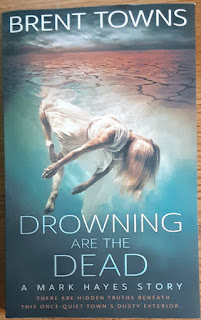 This is an excellent mystery story wrapped in a very attractive package from Rough Edges Press. The title is catchy; the cover is a knockout. A perk for American readers is that it’s set in Australia, offering a slice of exotica to many of us.

Mark Hayes is a private detective, an ex-cop as many of them actually are. He’s hired to track down another PI who went missing while in the small town of Friar’s Lake deep in Australia’s Outback. The missing man was investigating a dead girl who may or may not have been the victim of a notorious serial killer named Ten Cent. Only, Ten Cent has been inactive for a long time and is presumed by the authorities to be either dead or incarcerated.

That’s the set-up and I’m not going to give away any spoilers. As you might expect, Mark gets more than he bargained for as he finds a small town full of big secrets. This is the first adventure for the character Mark Hayes. It shouldn’t be the last. He’s an engaging character with streaks of both stubbornness and compassion in his makeup. His ex-wife is still a cop and they have a complex relationship that provides (for story purposes) a way for Mark to occasionally get information a typical PI wouldn’t have access to.

As for the writing, this may be the character’s first outing but Brent Towns has written a lot of books and it shows here. The prose is smooth, transitions are handled quickly and professionally, description is enough but not too much. The style has just enough quirks to make it interesting but not enough to make you aware that you’re reading a story.

I had a good time with this tale, staying up later than normal over several nights to finish it. I’d read a few pages and slip fully into the story, and then the page turns would come fast and furiously. Highly recommended.

Posted by Charles Gramlich at 8:34 AM 2 comments: