I had a somewhat unusual lucid dream last night. For those of you who don't know, a lucid dream is one in which you realize you're dreaming. In some lucid dreams you can completely control the dream, and in such cases I immediately start to fly. However, last night's dream was more one where I  came slowly to understand I was dreaming, and was trying to convince Lana of it, but I couldn't make radical changes in the dream flow.

It started when we had just gotten up in the morning and a small portable radio on our counter started playing on its own. I turned it off, then remarked to Lana that it was weird. I began looking around with a frown, and then told Lana that everything felt weird. She indicated that everything seemed normal to her. I told her that I thought we were in a dream, and she laughed. She watched me then as I did my "dream test," which is to see if I can jump up and touch the ceiling. I told her that if it were a dream I would be able to "hang" in the air for a moment. I tried it, and did not quite touch the ceiling, but there was a definite feeling of floating so I became absolutely convinced that it was a dream. Lana still argued against it.

Lana was getting dressed and then I realized that we were supposed to go to court this morning. I don't know why but I was going to be the defendant. We arrived at the courthouse (magically apparently) still arguing over whether this was a dream. As I went in the courthouse I was looking around for some mischief to get into. Lana directed us to a couple of plush seats and we sat down and then I smiled at her triumphantly and said:

OK, if this isn't a dream, can you explain to me why Batman is our judge?

Adam West was our judge, and his Batsuit was folded up on a chair beside him. I told Lana to watch this and got up from my chair with the intent of stealing the batsuit. West saw me, though, as I approached, and I turned to try and hide my intentions and he said in his classic Batman voice:

"Have spin moves become pat of the defendant's repertoire these days?"

At which point I laughed and woke up.


Posted by Charles Gramlich at 9:18 AM 5 comments:

James Reasoner creates some iconic characters and sets up a western series with a dynamite opening book. I understand there was a series of these books published in the past in which the sequels were written by other authors, but I haven't read any of those. I did much enjoy this one though.

Matthew Faraday runs a detective agency, a competitor to the Pinkertons. He brings young Daniel Britten onto his team and sends him to investigate an apparent attempt to sabotage the western expansion of the railroad. Someone is informing the Sioux of the movements and vulnerabilities of the "Iron Horse" and Britten soon begins to accumulate suspects.

We have a pretty good mystery built up here, and then a wild free-for-all ending in which the mystery is revealed and the action rolls. A really strong ending. Two particularly well developed secondary characters were Sam Callaghan, a rough frontiersmen drawn along the lines of Wild Bill Hickock, and Mordecai Vint, a peddler with a love of strong drink who also has a beautiful daughter--Laura. I have a feeling that Callaghan plays a role in the later books in the series. I liked him quite a lot.

All in all, an excellent and entertaining read. 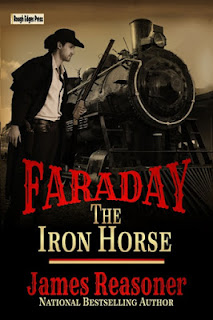 Stage Fright is the fourth book in the Dan Spalding series. Spalding is a music buff and record store owner in Ozark City who frequently gets involved in solving local crimes and helping local citizens. He's a bit of a Knight Errant, as in John D. MacDonald's Travis McGee, and the Spalding books evoke a similar feeling in me.

I've enjoyed all the previous entries in this series and this was no exception. A quick, taut thriller with lots of action and suspense.

This is the first book I’ve read by John M. Whalen, but it won’t be the last. It’s a standalone novel. The writing is very good, with a lot of action and well-drawn characters and settings. I’d classify it as Sword & Sorcery. Tragon is our main hero. He’s strong and courageous, but no Conan. He struggles with fears and doubts; he isn’t always top dog in a fight. One of the things I liked about the story is that it’s not just Tragon’s tale. It’s really an ensemble cast and several times we see other characters pull Tragon’s butt out of the fire. I particularly enjoyed Yusef and Darius.

The story begins when Tragon and his crew, who have been labeled pirates but hold that title in name only, arrive at a coastal town of “Afkira,” a fictionalized Africa. They are hired by a man named Hestus Variano to help him rescue his daughter from a city of sorcery called Caiphar. Mayhem ensues, of course, and Tragon finds that he has a strange connection to the daughter of Caiphar’s king. I won’t give more of the plot away so you’ll need to read it to find out what that connection is.

Whalen is certainly familiar with the tropes of Sword and Sorcery and adventure fiction. There are  elements in the tale which will likely remind many readers of Burroughs’ stories of Opar. There’s also a few twists on the general Sword and Sorcery concept. All in all, I enjoyed it quite a lot. 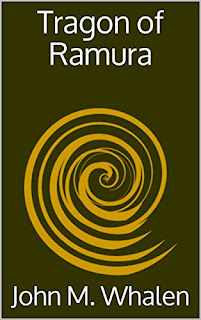 Posted by Charles Gramlich at 7:00 AM No comments:

So, the Causeway bridge is marked every 1/10 of a mile with a sign and is 24 miles across. For me coming across in the morning, the distance counts down from 24 to 0. At around 16 miles the bridge rises dramatically and there is a drawbridge that allows big boats to pass through from one side of the lake to the other. Normally, the drawbridge is down of course, as it was this morning.

The drawbridge itself is a metal grid that can be raised. It’s very different from the concrete that makes up the rest of the bridge and is very noticeable in both appearance and in the sound and sensation you get crossing it. Somehow, this morning, I missed it. In fact, I experienced about a 7 minute time-gap. I remember noticing that I was at 19.4 miles on the bridge countdown. Then suddenly I was at 12.3 miles. I’d passed 7 miles and roughly 7 minutes in the blink of the eye.

One possible answer to the missing time is that I was abducted by aliens. They obviously released me very quickly and I can understand why given all the spicy food I ate yesterday. They must also have released me before any actual probing because I don’t seem to have any residual effects from such an experience.

Another possible answer, far more prosaic, is that I was so focused on my thoughts that I simply blanked out the outside world. I was going over my lecture notes for classes this morning so I would have something of an excuse for such deep cogitation. The thing that is a bit scary about this, though, is that I seem to have been essentially “unconscious” for 7 minutes while operating a very large and potentially dangerous piece of vehicular equipment. What’s more scary to me, is that there were probably other folks on the road with me who were doing the same thing.

I’d say be careful out there but from my experience this morning it looks like being mindless didn’t hurt anything. There were no wrecked cars or blue lights in my wake when I “woke” up at 12.3 miles. Perhaps the mind is not such a terrible thing to waste after all.

Posted by Charles Gramlich at 7:54 AM 13 comments: