The Princess Bride, By William Goldman 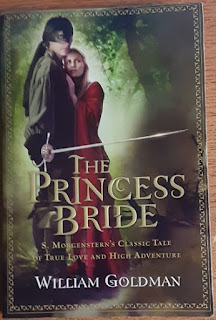 It took me a long time to watch the movie, The Princess Bride. I was put off by the title, which doesn’t sound like something most youngish men would be attracted to. When I finally watched it with my wife, I loved it. I’m also not a big market for humor but the humor of the movie was subtle and struck just the proper cord with me (other than the Billy Crystal sequence, which I’m not a fan of).

In 2020, again because of my wife, I read a book by Cary Elwes called “As You Wish,” about the making of the movie. He emphasized the respect that director Carl Reiner had for the original book and how almost all of the dialogue that I’d found funny in the movie came directly from the book. So, I ordered the book myself, the 30th anniversary edition, which contains a section of a potential sequel that was never written called “Buttercup’s Baby.” Here is my report.

First and foremost, I liked it. Indeed, all the best dialogue and scenes from the movie appeared in the book first. The one scene in the movie that was most heavily altered was the Billy Crystal/ Miracle Max scene, and that is the only one I don’t care for. That being said, I have to admit I think the movie is better than the book. And I almost never say that. The movie The Outlaw Josey Wales is better than the book it came from. I consider the movie Jaws and the book Jaws to be about even. Other than that, the book is better—always.

So why is The Princess Bride an exception? Please don’t get me wrong, the book is quite good and without it the movie wouldn’t exist. The book can stand on its own and needs make no apologies for what it is. But, the movie is better because of an interesting irony, which is not quite an irony when you look closely!

Throughout the book, William Goldman, the author, maintains a fiction within a fiction that he is not the original writer of the story, that he only abridged a much older classic work by a fellow named S. Morgenstern. He states that what he did is take out everything but the “good parts.” There’s a lengthy section at the front of the book where Goldman sets this inside joke up, and he continues the fiction throughout, with frequent asides (printed in italics) within the body of the book to describe what he left out (supposedly).

Although this was funny initially, it felt to me as if it went on too long, especially with the inserts and asides within the book proper. To me, the joke eventually became a little stale, while the material within the actual story kept moving forward with fresh humor. The movie left most of this material out. Thus the irony. The movie kept only the “good parts” of the book. However, since Goldman wrote the screenplay, too, what we really have is a case of the writer revising his previously work and realizing that certain original bits weren’t necessary.

Anyway, was it worth a read? Absolutely. And if I’d read it before seeing the movie, especially if I’d read it at a young age, I imagine it would have had a far greater impact on me and I probably would have liked it even better!