Legend of the Black Rose

Though I didn’t grow up in the literal pulp era, I started reading paperback fiction in the 1960s and 70s that was a direct descendent of the pulps. One of the first authors I fell in love with was Louis L’Amour, who started in the pulps. The first published novel that I wrote was Swords of Talera, in the tradition of  Edgar Rice Burroughs, the pulp writer who gave us John Carter of Mars and Tarzan of the Apes. Today, pulp fiction has come to mean colorful, thrilling tales, with plenty of action, larger than life characters, and exciting derring-do. And when I want a fun read I go looking for exactly that kind of work.

Teleport to the present, and I’m both amazed and honored that I’ve been able to write some of the same kind of stories and see them published. Writing is, quite often, hard work. But the sheer joy to be found in immersing oneself in an exciting tale cannot be denied. Quite simply, I love it.

On January 1, 2020, I officially started working on a pulp fiction book to be called Vengeance of the Black Rose. It was to be the 3rd book in a series about a female hero known as “The Black Rose,” who is most directly a literary descendent of such masked avengers as Zorro and the Lone Ranger. That book was just published on October 14, my birthday, and one of the best birthday presents I’ve ever gotten.

The series as a whole is a fun read. Catalina Christina Rivera (The Black Rose) is a young woman who grew up along the Texas/Mexico border in the late 1800s and early 1900s. She has a keen sense of justice and a character that is sometimes prickly but always empathic for the wounded and the frail. She has a great supporting cast around her, and is adept with many weapons but particularly favors the Urumi, the whip-sword—a unique tool to be sure.

Richard Prosch, a friend and an author who frequently gets five star reviews from me for his work, was intimately involved in the development of the Black Rose character, and he wrote the first two books in the series: Legend of the Black Rose, and The Sword of the Black Rose. I read the first one while working on my entry and it sent me enthusiastically to my keyboard to put down my own take on the character. 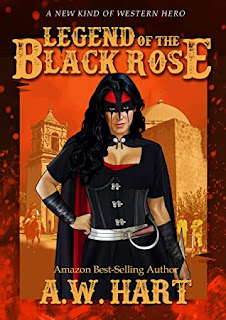 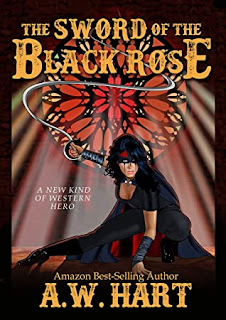 And so we come to Vengeance of the Black Rose. Catalina travels with several companions to the small mission of San Javier del Amor, only to find the mission burned and many of its inhabitants slain. Others have been taken away in chains, particularly many children. The raider who took the children seems to be more than a bandit, and perhaps more than human. He is called “The Beast,” or sometimes “El Tigre.” Catalina trails him into Mexico, only to discover El Tigre’s plan to raise a new Aztec empire.

In confronting El Tigre, Catalina loses a close friend. She’ll need every ounce of skill she possesses to save her remaining friends and to take her vengeance. I had fun writing this story and I have a feeling you might have fun reading it. I hope you’ll check it out:

Posted by Charles Gramlich at 7:19 AM 5 comments:

Some of you may remember that I record my reading year from October 14 (my birthday) to October 13 of the next year. Then I typically give a report on it. So, here is my reading report for October 2019 to October 2020.

I’m pretty sure I know the reasons why the number is down so much. First, the Covid pandemic has taken its toll on me. It’s added considerably to my workload at school, requiring both more time reassuring students and much more time learning a whole new approach to teaching. I’m still not satisfied with all my adjustments. Covid has also affected my mood, although as an introvert I don’t think it’s caused me any kind of real depression. But, when I do get a few minutes off I’ve often chosen mindless video games over the cognitive involvement of reading. It’s a stress escape behavior.

The second reason why my reading numbers is down, however, is much more positive. I’ve completed three 74,000 word (roughly) novels in the past year, and I’m proud of all of them. This has upped my nonfiction reading, for research purposes, but a lot of that is on line or articles that don’t get counted in my book totals. In addition, where I used to sit down in the evening for an hour or two with a good book, I’m often returning to my computer these days to finish my word count for the day—a necessary action to meet deadlines and to work around my regular job hours.

As far as details go. My SF reading was up this year, with 12 books in that genre. It was my go to genre apparently. Perhaps another escape since the books I wrote had nothing to do with SF. My westerns and thrillers were at 9 each, which was well down from the 20+ in each last year. The 5 nonfiction books I read were all research related. 2 of the 3 poetry books I read were also research related.

The only other interesting thing is that last year, for the first time, I started separating out “Men’s adventure Novels” as a genre. I had 5 then, and 5 more this year so that seems pretty stable. At any rate, thanks for letting me indulge myself once more in “talkin’ about books.” Till next year!