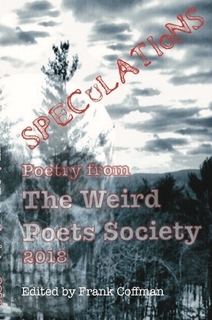 The Weird Poets Society was founded in 2016 by Frank Coffman on facebook as a group for published poets in the “Weird, Horrific, Supernatural, Science Fictional, Fantastic or otherwise clearly Speculative” genres of poetry. There are nearly 200 members, including myself. I believe it was in 2018 that Frank suggested publishing a collection of work from the members, and this first work, printed in the spring of 2019, is what I’m reviewing here. Twenty-eight poets are included, most with two individual poems. Some of these poems were previously published but many are brand new to this collection. Each contributor has a little “about the poet” paragraph included as well, and it was interesting to see the wide range of experiences exhibited by the members.

It’s always a little awkward for a poet or writer to review a collection that he/she is a part of. The readers will have to decide for themselves whether that devalues my comments. My pieces here are both recent poems from me called “When Night Calls to Hearts Pledged to the Sun,” and “They Rise to a Kiss.” Each has religious element and “When Night Calls” was partially inspired by a dream.

Leaving my pieces aside, my favorite pieces were by Bruce Boston, “A Stray Grimoire,” and “Pavane for a Cyber-Princess,” the latter of which I had read previously and which definitely fits the character of an ‘epic’ poem to me. I’ve made no secret of my admiration for Boston’s work over the years and have reviewed most of his poetry collections already. Boston’s list of accomplishments is a long one and his reputation in speculative poetry is well deserved. It’s quite a pleasure for me to final share a TOC with him.

I will say I felt quite comfortable and pleasantly happy with being included in this collection. There’s a range of styles, from free verse, to haiku, to formally structured traditional forms. We have the complexity of Coffman’s “Residual Murder” mixed with the deceptive simplicity of Kimberly Nugent’s “A White House.” There are playful, almost limerick-like pieces such as Salmonson’s “Bag,” and the formal power of Landis’s “The Price of Magic: Illusion’s Lure.” Nothing here felt forced or as if it didn’t belong. The language was fresh throughout and highly visual. There are no “clunkers.”

I’ll mention two other poets here whose pieces, back to back in the collection, particularly captured me while reading. These were John C. Mannone, with “Cycles,” with phrases such as “sackclothed moon” and “like Icarus with melted wings,” and the excellent “At the Mountain of Dreams” by Kurt Newton, which had such a nice melodic flow to it that I’ve already reread it several times now.

Top the poetry off with some dynamite illustrations by David M. Hoenig, and you have a really fine package that I am most pleased to be a part of. If you'd like to purchase a copy, the link is here: 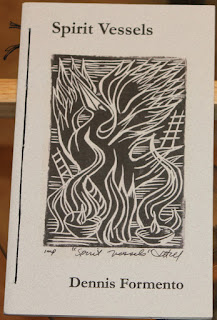 Spirit Vessels is the first chapbook that I’ve read from Dennis Formento, who lives in Slidell, Louisiana and is active in the local poetry community here. I’ve not met him personally but was interested in reading some of his work since I’ve heard good things about it from other local poets.

Spirit Vessels is Formento’s most recent collection and is a substantial work. The poems are free form and often leap from image to image. Some words that occurred to me frequently as I read through the pieces here were “jazz” and “improvisation.” A few pieces struck me as having surrealistic elements, but many more are what I would call “nature” poems. Local Louisiana elements are common but expand far beyond the usual swamps and gators. And there are plenty of references to natural environments outside of Louisiana. Most of this “nature” material is not pretty nature but reflects the damage done by pollution, coastal erosion, and climate change. These are not, for the most part, happy poems, but they present a realistic, if dramatic, view of the changing world environment.

I don’t want to suggest that such nature poems make up the entirety of the collection. There is plenty of variety here. But it was these pieces, such as “Water,” “Poem: ‘Useless’” and “Bayou Paddle,” that were the most memorable and effective to me. If you'd like to purchase a copy of the book, the publisher's site is here:

There are at least two more collections by Formento that I know of, Looking For An Out Place, and Cineplex. I’ve got copies of both of these and since I certainly enjoyed Spirit Vessels very much I’ll be looking forward to reading and reviewing these as well. 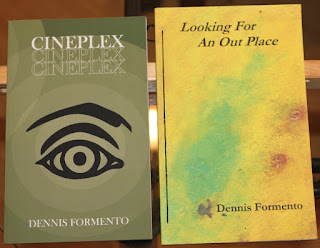 Posted by Charles Gramlich at 9:08 AM 3 comments: