A new collection of Epic Fantasy is out from Hydra Publications called "Unsheathed." This contains a story by me called "Where All the Souls are Hollow." This is the second story that I've written about the character Krieg, who is kind of a mix of REH's Kull and Karl Wagner's Kane. I just found out this was published so I haven't read it yet, but I like the cover and the story titles look pretty interesting. Right now it's available on Kindle here: 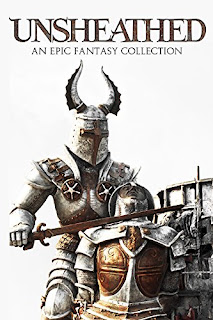 There's a third story of Krieg that is completed but not yet sold. It's called "The Rotted Land." I'm currently working on a fourth story called "Lords of War." I've been really enjoying writing about this character, more than any other heroic fantasy character I've created. Each of these tales starts with a brief, few line poem. Here's the one for "Where All the Souls are Hollow."

Out of choking dust and black smoke
came a warrior with eyes
like broken blades.
Wherever he journeyed,
war followed.
None could say why.
The survivors called him Krieg.

Lawyers, Am I Right?

A few lawyer jokes for your morning.

1.
A lawyer dies and is standing before St. Peter at the Pearly Gates for judgment. The lawyer says: “I object.”

The lawyer sputters. “Why that’s ridiculous. You must keep shoddy records. How did you figure I was 87?”

St. Peter replies: “We added up your billable hours.”

2.
A Catholic couple die in an accident just before their wedding. They go to heaven, but because they'd really been looking forward to their wedding, they ask St. Peter if they can still get married. He tells them that he’ll have to get back to them.

Two years later, St. Peter comes and asks if they still want to get married. They say yes and so he takes them to a priest who performs the ceremony.

All is well for quite a few years but finally the couple decide that they want a divorce. They go and ask St. Peter if they can get a divorce in heaven.

St. Peter sputters: “It took two years to get a priest up here. Do you have any idea how long it’ll take to get a lawyer?”

A condemned man is asked on his last day if he’d rather have a visit from his lawyer or a hooker. Without hesitation, he says: “Lawyer.”

The guard says, “Now you know the lawyer is not going to be able to get your execution delayed.”

The prisoner nods. “Yes. But all I want is a last round of kinky sex.”

“Well then why not pick the hooker?” the guard asks, flabbergasted.

The prisoner answers: “Because there’s ‘nothing’ a lawyer won’t do to get his client off.”

Posted by Charles Gramlich at 6:47 AM 16 comments: