We Interrupt This Regularly Scheduled Blog 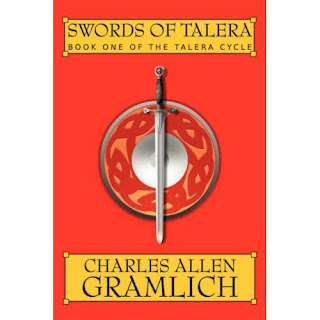 Over the past few months I’ve dropped little hints here to suggest that something good might be on the horizon for me. Well, now it’s begun to happen and I can finally talk about it. My novel, Swords of Talera, has just been released by Borgo Press and is available on Amazon. This is the first of a trilogy. The follow-up books will be Wings Over Talera and Witch of Talera. Both are scheduled for publication but I’m not sure exactly when that will take place.

I’m very happy. It’s been five years since Cold in the Light was published, and nearly eight since “Swords of Talera” ran as a magazine serial. This version has been substantially revised for book publication, by the way. Those of you who have read Cold in the Light should know that this is a very different kind of book. “Cold” was a horror/thriller. “Swords” falls into the “Sword & Planet” genre (often called “Interplanetary Romance”). This type of book originated with Edgar Rice Burroughs and his John Carter of Mars series.

Swords of Talera has a convoluted history. I wrote it when I was 24, then revised it around the age of 29 and started sending it to the bigger publishers. DAW and Del Rey passed on it, although I got good commentary from both places. DAW was cutting their Sword & Planet books to the bone about then, and Del Rey had moved much more into fantasy that was heavy on magic and dragons. I then sold it to a small publisher, who never published it, sold it to a second small publisher that went under when the owner absconded with the press's funds, and finally offered it to Tom and Ginger Johnson who ran it as a serial in their Startling Science Stories mag, where it won their readers’ choice award.

Last year a pro writer friend of mine named Charles Nuetzel, who has written Sword & Planet fiction and a lot of other stuff too, suggested I try my Taleran books on Robert Reginald over at Borgo Press. Rob liked the trilogy, accepted it, and then did a thorough editing job on all three. My special thanks go out to Charles (CAN) and to Rob. Much appreciated, my friends. Your names are gold with me.
Posted by Charles Gramlich at 12:10 AM

Email ThisBlogThis!Share to TwitterShare to FacebookShare to Pinterest
Labels: Swords of Talera

It's all about not giving up. Persistence is the key. Congratulations!

Got the book. Congratulations!

Congratulations.
This is encouraging to read.

Do you have any booksignings planned in New Orleans or nearby?

Thanks JR, Lucas, Susan, Bernita, Shauna. Susan, I hope you enjoy it. You too, Lucas. Shauna, I think I've got the basics worked out to have at least one signing at the Covington library. I'm not sure about other places around yet. But I will be posting any times on my blog. Thanks for asking.

WOW!! I am so happy for you, Charles! You must be dancing on Cloud 9. Congratulations!!
Donnetta

Great stuff!! You must be over the moon right now.

And now I've got another good reason for my next Amazon order!

Congratulations, Charles! Can't wait to get it.

Thanks everyone, I really appreciate the support.

Very exciting news. Congratulations. I'll be sure to purchase a copy. And, if you ever make your way to Maryland for signings, I'll be sure to wrangle as many people as I can for you.

Well done indeed!!! After my study cave is dealt with, I'll be ordering it next year.

Hope the wildlife is celebrating with you and that special one who is surrounded by idiots!

Tell me something..did you have an agent? Or were you just shopping this around until someone showed interest? Or did you have contacts that were able to get the foot into the door. Did your first novel help pave the way for the publishing of this series?

Susan, glad you are enjoying it. I can't reveal anything about Bryce quite yet, though ;)

Stewart, I don't have an agent. I shopped the book around a fair amount but what happened here is that a friend of mine who has written sword & planet stuff and a lot of other things suggested that I try Borgo Press because he'd had some luck there. He knew about the Taleran books because we'd talked about them a lot, and he'd read a fair amount of my work and liked it, and he knew Borgo was willing to look at stuff like the Taleran books. When I contacted Borgo I certainly mentioned "Cold in the Light," but I don't know whether that had much influence on their agreeing to look at the Taleran books. I'm sure it didn't hurt.

Wow, congratulations!!! I am very happy for you. Hey, if you have a book signing I will be the crazy girl who keeps saying, "no, you don't understand I KNOW him!! We are kinda friends... he reads my blog.." haha can't wait to read it.

Oh man, this is sooo cool!!! Congratulations!!! And they did a decent job on the cover, too! You're the man!

That's great. That is a good cover. Woo whooo!

I'm gonna buy a copy! It sounds awesome and I can't wait to read it.

Clifford, Sid, thanks very much. yeah, I like the cover.

Sheila, I'll see that you're ushered to the front of the line.

Cheri, I don't have my author copies yet, but if you want a signed copy after I get them I imagine we can work out a deal.