The Snake-Man’s Bane, by Howie K. Bentley, is a collection of heroic fantasy short stories from Wild Hunt Books. It contains: The Snake-Man’s Bane, All Will Be Righted on Samhain (with David C. Smith), The Heart of the Betrayer, Where There Is No Sanctuary, Thannhausefeer’s Guest, and Full Moon Revenant. Several have been previously published in magazines or anthologies but are collected here for the first time. Most are longish tales, which puts a lot of meat on their bones. 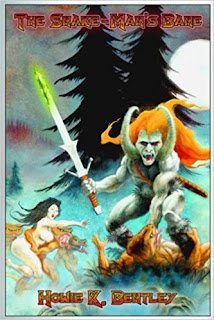 All stories in the collection stand on their own but there is a common thread that runs through them. This is the character of Thorn, a kind of demon-god from the “Rune Realms” who feeds on the essence of other gods and often possesses mortal warriors to use as avatars in our world. Thorn does not appear in all the stories but there is a connection to him in each of the tales.


The primary setting for these pieces is a mythical Europe. There are many hints to suggest that it is the same world, only later in time, as the world described by Robert E. Howard in his Hyborian Age Essay. Mention is made in the stories of Valusia (from Kull’s time) and Zamora (from Conan’s). There is mention of an imprisoned “elephant-headed god from beyond the stars” and of a “great warrior” who destroyed the tower where the god was imprisoned. This is certainly a reference to Robert E. Howard’s “TheTower of the Elephant,” which would make Conan the “great warrior.” In addition, the snake men of the title, who play a prominent role in the first story, seem quite likely to be related to the serpent men mentioned by Howard in some of his Kull tales.


One thing that doesn’t quite jive with the setting as described above is that in the story “All Will be Righted on Samhain,” which was co-written with the excellent author, David C. Smith, there is mention of Rome and the historical Queen Boadicea of the Kelts. A time is even given, 60 CE. However, the main character of this tale, Boadicea’s daughter, Bunduica, becomes a sorcerer who is able to open doorways to other realms. This connected realm concept may explain how this particular story links to the others in the collection.


Although the Howard influence is clear and spelled out for the reader in these tales, I also felt like there was a bit of influence from Michael Moorcock’s “Eternal Champion” series. In particular, the way that the demon-god Thorn inhabits various forms through time suggests this. At least to me.


My favorite story in the collection is “Where There is No Sanctuary.” This tale starts out in a way that was reminiscent for me of Howard’s “The Frost King’s Daughter.” This story also features my favorite warrior character in the collection, Argantyr. Argantyr is a literary descendent of such heroes as Conan and Karl Wagner’s Kane, but he is unique to Howie Bentley, with a particular talent that I won’t spoil for you here. He’s quite an appealing character, albeit grim, and I’d love to read more about him.


All influences and discussion of settings and characters aside, the key aspect to these stories is that they are “tales of high adventure.” They’re exciting works full of both heroic and villainous deeds, violent swordplay, and the dark doings of sorcery. I very much enjoyed them and highly recommend them to you. The book is available in both paperback and kindle if you’re looking to pick up a copy. Here’s the link:
Posted by Charles Gramlich at 5:01 PM

Thanks for a review of a book that probably won't make my reading list! At least, by reading your review, I have an idea of what's being published in other genres.

Sage, I like this sort of thing for sure

I'll have to see if it's on iTunes then.

Alex, I have no idea. Possibly not yet

Another one to add to my reading list... Thank you for the review, Charles!
And I really like the cover and the title.

Sounds quite cool, Charles ~ cheers! All spellings of Celt should be Kelt as in your post ~ wouldn't that be fine? I dig the storied connections!

Sounds like Bentley was having fun playing with a few scoops of sand from someone else's (or maybe a couple of someone elses'?) sandbox. :)

Vesper, good over the top stuff.

Erik, I'm good with that.