According to the introduction of this book by Silverberg, Stepsons of Terra was his 6th published novel, written in October of 1957. Silverberg indicated that he’d had plenty of shorter stuff published before this work, though, as well as the five other novels. The original title of the book was Shadow on the Stars, and it appeared in the April 1958 issue of Science Fiction Adventures, edited at the time by Larry T. Shaw, who requested a novel from Silverberg. Later that year it was picked up by Donald Wollheim for his Ace Doubles book line, where it appeared opposite of a book by British author Lan Wright. 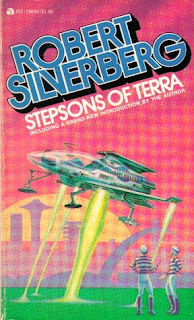 In his introduction to “Stepsons,” which contains a wealth of good information, Silverberg says he’d written plenty of shorter “melodramas” for Science Fiction Adventures under various pseudonyms. By melodramas he means “blood-and-thunder,” and “blazing ray-guns” written “strictly for fun.” As is often the case when Silverberg talks about writing SF, he takes—at least to me—a slightly disparaging tone about the more pulpish aspects of the genre. This never fails to irritate me. Personally, his more pulpish tales are by far my favorites among his work. These include two that I read as a kid called Conquerors from the Darkness and Time of the Great Freeze.


As for Stepsons of Terra, Silverberg writes that since it was going to appear under his own name, he: “was a trifle less flamboyant about making use of the pulp-magazine clichés beloved by the magazine’s readers. There would be no hissing villains and basilisk-eyed princess in this one, no desperate duels with dagger and mace, no feudal overloads swaggering about the stars. Rather, I would write a straightforward science fiction novel strongly plotted but not unduly weighted toward breathless adventure.”


So, what was the result? In my opinion? Well, it was good but I think it would have been better with more of those pulp elements. It’s definitely a tale of intrigue rather than action and adventure. The adventure is certainly not “breathless.” Relatively little actually happens in the story, although the writing is good and the characters hold your attention. Too, Silverberg certainly does avoid the cliché descriptions of women often found in tales of the pulp era. And the epic space battle in the book is about as anti-climactic as you can get—certainly not cliché though.


According to Silverberg, the book was very well received by the readers of Science Fiction Adventures and the next issue of the magazine was full of “letters of praise.” I’m sure it was, and I did enjoy the book. Not my favorite of his, though. I guess I’d have to say: give me more pulp.
Posted by Charles Gramlich at 9:53 AM

Pulp science fiction is what put the overall genre on the map and established it. (It certainly goes back further, but more people found it through pulp.) Since he'd already written better works in pulp, he shouldn't be so quick to dis it.

Have you been enjoying James Cameron's series SCIENCE FICTION? I have!

Alex, I agree. Silverberg and Moorcock have each done this kind of thing, making veiled derisive comments about the very thing that made them famous and brought them money.

CLoudia, I haven't had a chance to catch but one episode, but I liked it. I will have to try to get the whole series to binge watch

I agree with Claudia. James Cameron's STORY OF SCIENCE FICTION series on AMC presents plenty to think about. It focuses more on movies and TV series than SF books and stories but that's okay with me.

It's frustrating when writers famous for a genre snark at the genre, or the more "genre-y" elements of it. [sigh] That attitude brought us New Wave SF of the 60s and 70s, an attempt to push SF in a strongly literary direction which almost killed the genre. The top 10% or so of it is very good (Harlan Ellison comes to mind) but most of it is IMO boring, unreadable, pretentious drek.

George, I remember seeing ads for it and I'm sure I would really like it.

Angie, that's the reason I finally gave up my subscription to Omni, after years of taking the magazine. When the editor said at a conference I attended that they would NOT buy a "pulp style" story no matter how good it was, I went home and cancelled my subscription

Me chewing my way through the book: French Women Don't Get Fat by Mireille Guiliano … anyway, friend Gramlich … thank you for stopping by, hmmm? Love, cat.

If I was into science fiction, I'd read this one. Nice review, Charles.

It's not easy delivering something 'different' to your readers, gutsy, I hope it works out.

Silverberg has long been one of my favorite science fiction authors. For some reason, "The Face of the Waters" comes to my mind right now. Not pulp, but I found it just amazing. I had read it from the library, and then I searched a lot for it, to finally find it second-hand. I'm checking now, and I see that it has been reprinted and it's on Amazon. And, yes, I love pulp also!