I read my first Mickey Spillane book in 2008. It was “One Lonely Night,” the 4th book in the Mike Hammer series. I gave it one star. Here’s what I said: “I was really looking forward to enjoying my first Mickey Spillane book. I'm still waiting. This one was awful. Personally, I found it nearly illiterate. He's got only the tiniest fragment of the style of Chandler and Hammett but without even a sliver of their talent. I won't be reading another Spillane for a long, long time.”

Cue 2017, a long time in reading years. I’ve started my second Spillane/Hammer book. “Vengeance is Mine,” book 3 in the series, and I’m liking it a lot better. Not loving it, mind you, but at least it’s not a chore to read. As I started thinking of this post about Spillane’s work, I did some background reading on him. Turns out his first few books tended to focus on Hammer coming up against gangsters. Then he switched to “Commies.” My accidental selections of his books has apparently bracketed these periods. “One Lonely Night” was from his commie phase while “Vengeance” involved gangsters. Maybe that’s the difference. The “Commie” threat is certainly a lot more dated than the gangster threat.

This time with Spillane, though, I can at least begin to see the attraction many readers have for him. There is a rawness and an underlying power that creates a momentum for the story. The dialogue is dramatic, if not very realistic sounding. I can see why the Hammer tales are of interest to TV and film makers. My interest may be higher this time, as well, because I’ve been fiddling with a hardboiled story myself.

The books are also just chock full of items that grind my teeth, however. Of course, every beautiful woman (dame) in the tale is a knockout and every one of them has the hots for Mike Hammer, to the point they can’t resist him and beg him to take them. Most of them also enjoy a good slapping and accept being pushed around as their due. The cliché is sort of that they’re good girls in bad roles and they recognize the ultimate bad boy in Hammer. I’d never be one to say that you just can’t create this kind of female character. There are all kinds of people in the world. But over and over and over to the point of caricature and formula? I wince every time one of them is on scene in the story.

I still have a number of Spillane titles on my shelves. See the picture below. I picked these all up together at a library book sale. It was 9 years between my first and second attempt at Spillane. It probably won’t be so long for the third. I guess we’ll see. 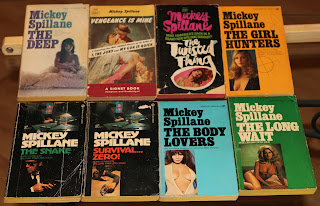 Posted by Charles Gramlich at 10:25 AM

They enjoy slapping? That's a bit dated all right. Not that I think any woman at any time wants that.
Guess you'll have to read the first two in the series.

Alex, there's a certain old time noir thing where the man slaps the woman and she is basically turned on by it. I'm sure you've seen it. It really is disconcerting to me.

A writer who affected many!

Sorry to disagree but I find Spillane immensely readable and the opening chapter of ONE LONELY NIGHT has stayed with me for over half a century. Different strokes for different folks, I guess.

Mark, did not know about that one.

Jerry House, it may be as simple as that I was in the wrong mood when I tried to read that first book. I find that it also seems to make a big difference at what Age one first reads an author. I didn't read Spillane until my 40s. You read him much earlier and that may have an influence.

Paddy Chayefsky -- now there's a man who could write.

It really is disconcerting to me.