A Dream of Tigers

I’m not big on dream interpretation. Most of my dreams relate in a direct fashion to things I’ve recently read, watched or experienced. But last night’s dream begs for interpretation, and I have one.

It was on the farm where I grew up. My sister, Dolores, and two of my brothers, Paul David and Raymond,  were with me in the big field below our house. We were separated from each other but had our guns because something had been bothering the cattle. I was walking the fence line when I heard two deer bounding away in the narrow band of trees behind me. As I looked for what had startled the deer, I saw a tiger stalking through the field on the other side of the fence. It hadn’t seen me yet. 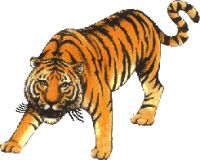 Suddenly afraid, I  ran toward my brothers and sister, yelling a warning. The tiger came into the field where we were. It was strangely elongated. It must have been thirty feet long, with weird “S” curves in its body. I realized the tiger had focused on my sister. I opened fire with my rifle to prevent it reaching her but the bullets had no effect. Dolores was near the pond and when the tiger reached her it broke into a number of smaller tigers and attacked.

Dolores disappeared and then the tiger turned and looked at me. It was just one again. I ran toward our house, hoping for a hiding place. I managed to reach the house and get the door shut, but the tiger burst through that flimsy barrier. I slammed another door in its face and it burst through that one too. I ran, slamming doors that it smashed away. I’d lost my gun but was searching for another in a panic as I woke up.


So, what is the interpretation? Well, Dolores died of colon cancer. I’m convinced the tiger represented that cancer. That elongated, curved tiger could even be said to resemble one’s intestines. But why should I have this dream? Now? Well, yesterday I had a colonoscopy. I’d been worried about it, afraid the tiger was going to come after me. Fortunately, they found only a couple of small polyps that don’t indicate any problems. Only after the relief of that news could my fears finally surface in a dream.
Posted by Charles Gramlich at 10:26 AM

Hello!! I’m indeed very happy for the great help that Dr. Ariba rendered to me, I was a HIV patient my mom also was a HIV patient, we saw a blog whereby Dr. Ariba cured HIV, we (Me and My mom) decided to contact him which we did, he asked us to buy some items, unfailingly we sent him the money he will need in buying the items required, He prepared the cure and sent it to us and after we have used the herbs he sent to us he asked us to go for check-up after three days of using the herbs, Luckily for us we were tested HIV negative, now I believe all these Testimonies about him on the INTERNET, he is truly a great man, if you want to discuss with me on how he cured us, kindly email me on cuteguedes@gmail.com or you can contact the great Herbalist and a spell caster on draribaspelltemple@gmail.com, dr.aribaspelltemple@outlook.com, or you can call him via his mobile phone number on +2348140439497

Sorry about your sister. Impressed by your telling, and interpretation, Charles

Daniel, this kind of thing doesn't really work does it?

Cloudia, thanks. I appreciate that.

That dream became a grim reminder of what was and what can be. A very visual interpretation of a demon we must all face, both through the loss of loved ones and our own mortality.

Bernard, yes. it's one that will stay with me a good while.

Wow. Congrats on the negative test. And yeah, that does seem to be a decent interpretation of your dream. Major suck about your sister. :(

Wheeew, I'm glad you have a bill of health. I tend to 'solve' my problems in my dreams, getting answers to questions, finding a path through the darkness, I may call on you for assistance, you have a good angle on things. Have a happy week Charles, and keep on dreaming *smiles*

One of my sisters has lupus, literally "the Wolf" that attacks one's own body -- a close parallel to your dream imagery.

I know someone else who dreams of alligators on a fairly regular basis.

Shadow, it was a big relief to hear for sure. Thanks for visiting.

yeah, that does seem to be a decent interpretation of your dream. Major suck about your sister. :(

I am John Danilla from UK( northern ireland), i want to share a
testimony on how a powerful spell caster cured my HIV disease, i was
diagnosed of this disease, in the year 2009, last week i saw a testimony on
Dr.Akioya on how he cured an HIV patient, so i contacted him through phone
and he asked me to email him, which idid, so he told me that all my
problems is over and then he decided to do an healing spell spell for me so
after he finished it, he told me to wait for just 24 hours and then i
should go for a test, so i really did as he had said, so my greatest
surprised when i went to the hospital to go for an HIV test, the Medical
doctor diagnosed that, i am now HIV negetative at first i was amazed and
now i have come to realise that this spell caster Dr. Akioya is a very
powerful one and a real spell caster. So viewers of this should please join
me in my celebration for i am the happiest man on earth today and if you
want to contact him, you can do this via his email
(drakioya17spellhome@gmail.com or call him or whatsapp him
+2348105257464. or you can visit is website;
http://drakioyaherbalcenter.home.blog
https://drakioyaherbalhome.blogspot.com/

I'm really grateful and thankful for what Dr. Ariba has done in my life FOR curing my herpes illness i am very grateful i pray God continue to bless and protect you and also give you a long life to enable you continue to help other people suffering from this illness outside, i shall continue to share about your good work and drop your email for people to contact YOU for theIR own cure too. email Dr Ariba now draribaherbs@gmail.com or greataribaspelltemple@gmail.com or WhatsApp him on +2349051737221 Thanks

Just wanna say a big thank you patrice cythia for introducing me to Dr Idedia the great HERBALIST that helped me prepare home remedies that cured my herpes simplex virus (HSV1&2)
I was infected with herpes for the past two years and i was not happy all day so i was desperate to get a cure so that i can live normal and get healthy.One day i was less busy so i decided to make latest research on herpes  cure  and i found a site were everyone was talking about Dr Idedia and has ability to cure Herpes, HIV, HPV, Cancer, ALS, COPD, Anthrax, genital wart, cold sore, Arthritis skin tag and all manners of diseases and virus.So i discussed with cythia and she explained to me that its very easy working with Dr Idedia  so i contacted Dr Idedia via email  dr.idediatraditionalhealinghome@gmail.com and he helped me just as he has helped others now I am  now cured from herpes am very happy now.and i can also assure you that he can also help you. so if you need the service of DR Idedia kindly contact him dr.idediatraditionalhealinghome@gmail.com or whatsapp +2349074505296.
visit his websites  https://dr-idedia-traditional-healing-home9.webnode.com/ Or https://sites.google.com/view/dridediatraditionalhealinghome/ Or https://dr-idedia-traditional-healing-home.business.site/

I was diagnosed of herpes 3 years, and ever since then i have been taking treatment to prevent outbreaks, burning and blisters, but there was no improvement until i came across testimonies of Dr. VOODOO on how he has been curing different people from different diseases all over the world, then i contacted him. After our conversation he sent me the medicine which i took according to his instructions for up to 2 weeks. After completing the medication i went back to my doctor for another test and the virus was all gone and i was completely cured, since then i have not had any signs of outbreak. I'm so filled with joy. With herbal medication Herpes Virus is 100% curable. I refer Dr VOODOO to everyone out there with the virus Email: voodoospelltemple66@gmail.com Add Dr voodoo on whatsApp +2348140120719