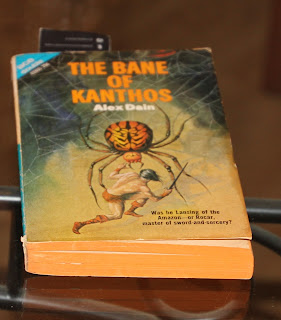 I'd originally planned to put this up officially for Forgotten Books Friday but I got busy and have been thinking about my son's wedding, which is coming up tomorrow. Anyway, I recently heard about this book on facebook and ordered a copy. I was pleasantly surprised. There is a newer kindle edition of this work but I read the original 1969 edition, which was part of an Ace Double with Kalin by E. C. Tubb. I'd already read Kalin in another format.

The Bane of Kanthos is a sword and planet novel, in the tradition of ERB's Barsoom series. An earthman is transported to what appears to be an alternate world via passage through a black gate. He discovers that the world is at risk from a great, reawakened evil, and that he is the only one who can save it. There are staunch allies, nasty villains, and a beautiful warrior-princess. All these tropes are familiar, but I enjoy them. What raised this book a little above the standard level for me was the fine writing. I thought the author's word usage and prose choices were excellent ones.

On Goodreads, there is an indication that the author, Alex Dain, has planned to write more stories about this world. The kindle edition is listed as: Book 1 in the Chronicles of the Gates. However, the kindle edition was published in 2013 and nothing new has appeared from Dain since. That would seem to make it unlikely that he is going to continue the series, although I'd certainly be interested in a sequel.

Even if nothing else appears in the series, I still think this one is worth a read for fantasy fans, particularly fans of sword and planet fiction.
Posted by Charles Gramlich at 9:27 AM

I hadn't heard of this one, but I'll give it a try. Thanks for the heads-up.

Keith, it was new to me a few weeks ago. I had a copy of Kalin but it wasn't in the Ace double form

Maybe the next book has to take a little more time to compose, but four years is a long time to wait.

Oscar, there were certainly gaps between the Talera books. turns out too, he writes a thriller series apparently under his own name. Dain was a pseudonym

Congrats and best wishes to your son. :D