Picking up on the Blog Again

Since my summer has begun, I'm hoping to pick up a bit on this blog, which I've neglected for quite a while. As per my usual, it'll mostly have to do with writing and reading, with occasional asides into whatever strikes my fancy.

On the writing front, I have a western novella about 3/4s done called "The Scarred One." Had to put it on hold during the school year, but now I'll try to get untracked on it. I've got quite a few completed stories that I need to submit, including two about the sword & sorcery character of Krieg. And I'm still considering self publishing a set of horror stories based on my dreams. I have about a dozen of those finished.

I'm working on a vampire story right now that I'm enjoying, and have opening scenes on several other tales that I don't know what to do with. Lately I've been working on a lot of poetry, partially because it takes less time and I can squeeze out a few moments from work here and there to commit poem-icide. Several of my poems appear in the latest issue of The Horror Zine. Thanks to Jeani Rector. 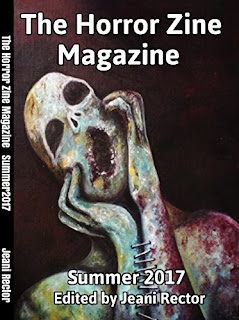 So, it is with good intentions that I post this blog. Let's see if that holds up through the next few weeks!

Posted by Charles Gramlich at 6:02 PM

Charles -- I know the feeling. :) Best of luck on getting back into regular blogging.

Good luck also on your submissions/publications. And congrats on your poems in Horror Zine!

Angie, thanks. I appreciate it

Glad to see you!

Congratulations!
Sounds like you have a lot of different projects in the hopper. You won't be bored.
Good to hear from you.

Glad to hear you're getting back into the swing of things with blogging, Charles. I've felt a renewed enthusiasm for posting, too.

Congrats on the poems. That's good to hear.

Look forward to hearing more from you.

Cloudia, I miss it when I don't do it

Alex, I don't really understand the concept of boredom.

Looking forward to all your work, Charles, especially the Western.

David, one of my main irritants about my job is the inevitable interruption of longer projects and how much effort it takes to get back into them.

Is poem-icide fatal? Good luck on the subs, Charles!

It does get increasingly hard-11 years for me. What else is there to say?

I'd love to read your poetry. Good luck with the writing, Charles!

Patti, nothing but the truth of it

Prashant, Sometime I will post more of it here