Michael Burgess has died.  He was just sixty-five. I usually called him Rob, because Robert Reginald was the professional name that he did most of his writing and editing work under. I never met him in person but I talked to him occasionally on the phone and corresponded with him for years through email. I knew he’d had health problems as a consequence of a bad heart attack about ten years ago, but his energy was always so palpable that it came as a complete shock to me to find out he had passed on November 20. I had an email from him a week or so before saying he’d just gotten out of the hospital and was feeling pretty weak, but that he was glad to be home. I never for a moment thought that would be the last email I ever saw from him.

I was introduced to Rob by a mutual friend, Charles Nuetzel. Rob was editor and publisher of Borgo Press, which later became an imprint of Wildside Press. I wrote him about my Talera series of novels and he asked to see them. He accepted all three and that was the beginning of my working relationship with Rob. He went on to edit three collections of my short stories, a couple of my nonfiction books, and the Wildside Double that I was very proud of, having grown up reading the old Ace Doubles. A couple of years ago, when Rob was revisiting the Talera series to put them in ebook and audiobook format, he wrote to tell me that he’d almost forgotten how good they were and that I should write more. That compliment really meant a lot to me and I did indeed write another Talera book. I sent it to him at the end of this past summer, and though he acknowledged receiving it I don’t know if he ever got a chance to actually read it. I like to think he did, and that he enjoyed it.

Rob was a professional editor and always freely expressed his thoughts, comments and suggestions on my work, but he was also an incredibly warm individual who was easy to approach and open to discussion. He always took into account my thoughts and hopes for the stuff I sent him. He was certainly the kindest and most supportive editor I’ve ever met. I will miss bouncing ideas off him and knowing he’d give them an honest but caring appraisal.

A second way that I knew Rob was through his own writing. He wrote mysteries, pulp noir, science fiction, and nonfiction with equal ease. I was a particular fan of his science fiction, which was very much classical SF in tone and content. That is, he took interesting ideas and melded them with action and wit for a fun and thoughtful read. I’m lucky that I still have several of his novels yet to read. Each one will be especially meaningful to me now.

The picture I put up of Rob comes from the webpage of Bobbitt Memorial Chapel, where the services are to be held for him. I imagine it was provided by Rob’s family. The link is here if you would like to visit. There is also an obituary of him up at Locus Online. 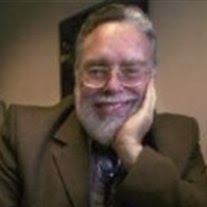 One of the good things about the age we live in is that we can become friends, good friends, with people we have never met face to face. I consider Michael Burgess (Rob) a friend. I’m very sad today that he is gone, but very happy that I got a chance to know him.
----
----

Posted by Charles Gramlich at 7:34 AM

I'm very sorry for the loss of your friend, Charles. He sounded like a wonderful human being.

David, he was indeed.

Definitely a loss for readers & writers world 'round.

It's very nice to hear about editors who are also mentors.

Peace to his family.

A fine tribute, Charles. Though I never met your friend, you have brought him to life for me, and I feel the loss of him as well.

Very sorry you lost such a good friend and inspiration. That was a nice tribute to the man.

Sorry for your friend's passing. I think I still have a couple of his books hidden in my TBR pile.

Paul, I know. Not that many of his kind of editor around anymore.

Alex, I'm glad you liked it.

Randy, I've read a number of his but still have 3 or 4 laying around on my shelves.

Sorry to hear about this, Charles. And sounds like he left behind a fine legacy, though one always wishes for more ... not only more writing, but more of the relationship.

Ty, yes, I definitely would have liked both.

Well, as a reader I can say he did an outstanding job of editing.

As for the sense of loss you must feel: even though you never "met" him, the two of you obviously knew each other quite well. My condolences.

Sounds like we lost a good one. I'm sorry for having not met him. My condolences, Charles.

Charles, I'm very sorry that you have lost a friend.

Too much dying going on in my own life right now. 4 friends in 2 months. I don't think it will equal '07 when I hit 9 funerals 1 my mother-6 others by suicide.

I can empathize with what you wrote Charles and I hope having a degree of separation eases your loss. I hope you will cherish the memories of shared experiences as long as you live.

I'm sorry for your loss. I never knew him but he sounds like a great guy.

Snowbrush, None of us have enough to begin with.

G., thanks, he was quite the fellow.

Sorry for the loss of your friend. As as someone 65, 65 is too young to die. But he seems to have led a full life in every way.

I am really sorry to hear about your loss.

I'm so very sorry, Charles, for the loss of your friend. I think you can tell he was a wonderful person even just by looking at his picture. Such a warm smile...
You are right about becoming close to people who we never meet in person but connect on the heart and mind level. For that, the Internet is a blessing...

I'm sorry to hear this. The recap on your memories of him are really well expressed.

Patti, he was involved with many hundreds of books and that was what he loved doing.

Vesper, for all we complain about the net at times, that part truly is a blessing.

Charles, I'm sorry about your dear friend. Sometimes the people we don't meet mean more to us than the ones we know intimately.

Charles-Having lost 2 parents and 2 close friends recently, I am just learning how to deal with the pain. It hurts everyday but the edges seem to soften with time. :(

Sad to hear the lose of your wonderful friend.

That is so true about today, and our unfolding ways of getting to know people. That's a sweet thing.

I'm sorry! I also had a friend die unexpectedly recently and it's such a shock.

i agree in that we can find wonderful friendships that we never meet face to face...and our lives become richer for it...i am sorry for the passing of your friend....

Erik, it is indeed.

Riot Kitty, yes, very much so.

A very nice eulogy of your friend, Charles. I'm sorry for your loss.