Today marks the first time that Razored Zen Press has published an entire work by someone other than myself. Although the Louisiana Inklings Anthology has material in it by other folks, it also contains stuff from me. Last night, a short story called Charade You Are went live on Amazon. Outside of the introduction, which I wrote, the tale is the product of another mind. One that is—perhaps—even more twisted than my own.

Charade You Are is a political satire. The name on the cover as author is Reagan Pheasant, which is a bit of word play on the contents. It is, as you probably have surmised, not the author’s true name. I know Reagan Pheasant but am not going to reveal their identity. 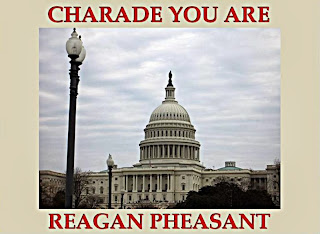 The reason for the mystery is simple. Charade You Are contains some graphic sexual scenes and some very strong language that might get Reagan into trouble at their job. The sexual scenes are neither erotic nor pornographic per se. They are not meant to titillate but are part of the satire. As I said, I know Reagan Pheasant. They have a point to make about the increasing polarization that we’ve seen in our government and society over the past twenty or so years. I think they make the point well, and with humor, albeit of the black kind. Otherwise I wouldn’t be involved in publishing it.

I don’t want to discuss the story more at present because I don’t want to spoil anything for those who might read it.  Over time I can talk more about it, and if anyone has questions I can relay those to Reagan. I can’t guarantee they’ll answer them.

Congratulations, Charles! You've stepped into new territory. Hope more books by other authors are to follow.

Alex, quite possibly, although it will have to be something I really feel positive about.

Charles, looks like you've taken the first step into publishing for others - congratulaions!

Charles, is this an updated (ie. edited) version of what I read from the author last year?

I recall it had solid writing, but a truly whacko premise.

Ty, it's edited, but not with any major changes from what went up before. Definitely a wild story idea. I'll send you the updated version since I know you are the one person who I know actually did buy it before.

Congrats on the new release.

As for content issues, I can completely sympathize. As you know, mine is similar as it applies to the sex, and I've gotten both the cold shoulder and a world of trouble at work because of it. Lesson learned as it applies to work.

Very cool that you are a publisher! How did you get into that area?

You are on fire. Liked the wisdom in your previous post aabout the eloquence of silence

Riot Kitty, pretty much by accident. I talked a bit about it in the introduction to the story. I'll probably post that here eventually.

Cloudia, actually I seem to be pretty ice cold right now. at least where success is concerned. ;(

G. B., yeah, definitely a bit of a worrisome thing.

Satire is sometimes lost on me. I've discovered that I have a more literal mind, and often I take the meaning of the words as written rather than the subtext behind them.

Some would say I lack a sense of humor. Not true. I just struggle to recognize true satire from pure meanness.

Travis Cody, I sometimes have that problem as well. In this story the satire is pretty broad so it even came through to me. But I don't always get it.

Charles-sounds interesting and I love the name, Reagan Pheasant!

Jodi, I'm not sure a lot of thought went into Reagan Pheasant, but it has a ring.

contains some graphic sexual scenes and some very strong language that might get Reagan into trouble at their job.

That's one of the major reasons people who write explicit sex -- even if it's not meant for titillation -- use pseuds. There's nothing wrong with sex, even if it is for titillation; don't like, don't read. But too many people disagree with that, so.... Here we are.

Best of luck to your friend.

Angie, thanks. I'll pass the message along.