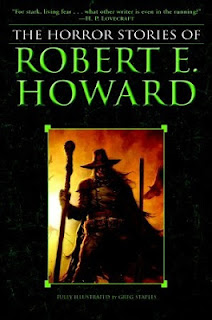 This is a massive, 500+ pages compilation of pretty much every horror tale Robert E. Howard wrote. If you’re a fan of REH you’ll surely love it. If all you know is his fantasy, his Conan stories, then it will enlighten you on the man’s tremendous range. I actually started reading this a couple of years ago and chose to read it slowly and savor it, just a story here and there. Many of these stories I’d read before but they were all worth a reread.

I read one review of this collection that said it wasn’t “horror.” Well, not if your idea of horror has been defined by Stephen King. There are vampires, ghosts, and werewolves here, but the bulk of the stories either have Lovecraftian elements, or are of a type I might call southern campfire tales. By that, I mean the kind of tales rural southerners tell each other on dark nights when panthers are screaming in the woods and the fireflies flash like dead souls haunting the piney woods. Tell one of these around a campfire and no one will want to leave the light to go gather more firewood. The only thing worse would be to let the fire…die down.

Another thing about Howard’s stories is that, as a writer, REH found it basically impossible not to include a high level of physical action in his tales. Some people think that moves a piece away from horror. I don’t. Action and horror are a great mix. There’s plenty of it here.

Among my favorite pieces in this collection are “Dig Me No Grave,” “Old Garfield’s Heart,” “The Black Stone,” and “The Thing on the Roof.” I think the masterpiece of the collection is “Pigeons from Hell,” which creeped me out pretty badly.

This collection strove for completeness and that means not every piece in here is a masterpiece. There are also some fragments at the end that I wish Howard would have finished. Generally, though, I really liked this work and gave it five stars on Goodreads. I wish I'd written a bunch of these.
----
----

Posted by Charles Gramlich at 3:24 PM

I do dig the Conan stories but not read any of his horror. Adding to my list now!

I used to be a little down on REH's horror for lacking subtlety. Reading this collection disabuse me of that. This is a great book.

Great explanation of his talent, Charles.

Can't say that I've read any REH stories, but I went through a horror stage in my early 20's and could have. May get around to giving him a tryout. I Edgar Allan Poe's stories.

Meant to say I "enjoyed" Poe.

Oooo, I'm so jealous. Been wanting to get my hands on this one, but I refuse to order it as I enjoy the "luck of the draw" too much from browsing at book stores, especially used book stores. I was lucky enough a few years back to get ahold of a collection of Howard's boxing tales, and that was well worth the price.

As for the tales not being horror, yeah, I think too many people only recognize horror fiction from the last 30 years or thereabouts, in no small part because of King. Horror literature was around a long time before King, and is much more fluid than some might believe. In fact, readers of a hundred years ago likely wouldn't recognize today's horror as actual horror.

As for action-oriented horror, I see it all the time. One just has to know where to look. Joe R. Lansdale, Blake Crouch, F. Paul Wilson, to some extent Dean Koontz even ... there are a ton of writers who mix action in with their horror.

Alex, it's quite good, I think.

The Wasp, indeed. Thanks for dropping by and adding in.

Ty, I don't know Crouch, but Lansdale, Wilson and Koontz do great action horror. That's what I was striving for in Cold in the Light as well.

Probably to creepy for me (I have really vivid dreams) but nice review!

Charles, I might have read a couple of REH's stories a long time ago. Conan came to me via comics and films. I have been meaning to read some of his works and I'm glad many are available in public domain. I'll look out for this collection, though.

gotta get me that, thx charles :)

Riot Kitty, I have vivid dreams too and really love my nightmares. Some of my most enjoyable experiences have been some awesome nightmares. Enjoyable after the fact, of course. :)

Prashant, there are a lot of different ways to get Howard, and his stuff is in many, many collections. I couldn't even begin a list it would be so long.

I don't have this one. I need to rectify that. I've been in the same mode of reading slowly through one of these Del Rey collections, my journey being through El Borak and Other Desert Adventures. I'm enjoying it very much.

Patti, very broad in material. I like that in a leisurely reading anthology.

Chris, since I've read most of Howard's stuff at one time or another, the leisurely sampling type of reading for these anthologies is very pleasant for me.

Unlike you, I hate buying new books, but I might have to get it.

Wow, I never knew REH wrote horror. I will definitely have to check that out -- thanks.

I agree with you about the action/horror mix. Some horror is better told with less action, but that surely depends on the story. The action in Cold In the Light definitely added to the book's horror element, rather than detract from it.

Snowbrush, when I get a little money I buy food and shelter. What's left I spend on books. :)

Greg, thanks for the kind words on Cold in the Light. I do like atmospheric horror too, but generally at shorter length. A full length novel needs some good action for me.

I know you liked 'Pigeons from Hell' which is also one of my favorite horror stories. They made it into one of the best horror episodes of all time on the TV series 'Thriller'. My brother Paul and I watched that one together back in '61 when it first played and then had to go up in our attic bedroom to sleep... only I don't think we slept. :)

Bernard, I've seen that adaptation quite a long time ago but I still remember it pretty well. Very creepy atmosphere.

"when I get a little money I buy food and shelter. What's left I spend on books."

snowbrush, well books are probably my dope if truth be told. :)

I've got this book, along with most of the other Del Rey series. Great collection if for no other reason than it is able to pull together like stories from a wide scattering of older titles (I have many of those as well, but they're in far worse shape...).

Great to see someone digging back into these old Howardian "creepy backwoods yarns" as they might be called.

Jack, yeah, creepy is the key word. BTW, I reviewed Operation Arrowhead on Goodreads and Amazon. I will put the review up on my blog at some point. Good book.

"books are probably my dope"

I tend to eat my dope as opposed to smoking it. Is that what you do?

Snowbrush, I don't believe I've eaten any books. I tend to take them intraocularly.

You don't know for sure? You must be doing some darn books. I'll pay you good money for them.

"I tend to take them intraocularly."

Then again, if I have to jab them into my eyes, maybe not. Paper cuts hurt enough on my fingers.