Hello, “Under the Ember Star”

I was setting up an Amazon Author Page for Amazon.France today when a book cover popped up that I hadn’t seen before. I looked a little more closely, and it was the cover for Under the Ember Star, which is finally in print through both Amazon and Barnes & Noble. The publication date says March 29, 2012, but I checked as recently as last week and it wasn’t yet up. I think March is when it was submitted.

This one comes from Wildside Press, through Borgo Press as the purchasing imprint, and it’s listed as Wildside Double #25. Yes, you heard right. It’s a double book, in the tradition of the old Ace doubles so many of us remember fondly. There are two books printed back to back, each with its own cover. My cover is below, and I think it’s one of the best I’ve had yet. 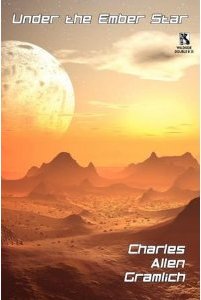 The second book is by Mark E. Burgess and is called The Battle for Eden: The Human/Knacker War, Book 3. Military SF probably best describes it. The three books of the Human/Knacker war are only loosely tied together by the concept of the Knacker invasion of Earth’s space territories. I’ve read all three and each stands alone just fine without the reader needing to know anything about the other two. I read “Battle for Eden” when it was first suggested as the flip side for my work, and it’s full of action and adventure, and quite a lot of intelligent thought.

Under the Ember Star is the book I wrote last summer, and I’m very proud of it. I’d call it a mixture of Space Opera and Sword & Planet adventure.  If you want to look for literary forebears, well, I gave special acknowledgments to Leigh Brackett and C. L. Moore in the book.  If you think of Sword of Rhiannon and the Northwest Smith stories, you’d be hitting close to the feel I was going for in the story.

I’d say “Ember Star” is the same kind of action-oriented adventure story I’ve tried to tell most of my life, but in one way I really tried to stretch myself with this book. For the first time in any of my longer works, the main character is female. She’s also carrying a little more baggage than my typical hero, but that doesn’t stop her from kicking ass. I’m happy with how she turned out.

Here’s the Blurb for Under the Ember Star:  “Ginn Hollis was fourteen when her father's mysterious death left her alone on the planet Kelmer. She's grown up since then. Kelmer is a harsh world, an old world: its people are ancient, its civilization long fallen and dimly dreaming under a brown dwarf sun the natives call the Ember Star. But now, long dormant forces are beginning to stir on Kelmer, forces that could destroy the planet forever...or bring it back to life. One being stands at the center of the turmoil. His origins are veiled, his destiny is unclear. Everyone wants a piece of him. Only Ginn Hollis can protect him from both sides--if she can save herself first.... Another grand science-fantasy adventure by a riveting storyteller.”

LOVE that title and cover, Charles

I would love to read and review both sides of this book. Is there going to be an electronic edition? I have shelf space issues (something touched on in a recent post of yours), but will buy the dead tree edition if that's all that's available.

Keith, I was told there'd eventually be an ebook edition. I have no idea when, though. The ebook editions might actually split the two books apart, though. At least that was the rumor.

The best cover yet, I agree, fascinating!

Congratulations! I never read (in phsical shape at least) a Ace double. but i think is a kind of edition that should be back in the shelves. Maybe you help to do it ;)

"riveting storyteller" is dead on. that is a pretty sweet cover. congrats on the pub!

On the wishlist. Amazon is still reporting 1 to 3 weeks to ship, so they might not have their copies yet.

Cover looks good...once again too much on the Cc this month but next i will get it. Just because you and a couple others are twisting me away from the 19th century (curse you all! ha ha ha ha)

Yep, on my wishlist too. Curse you and your riveting storytelling!

Merisi, it captures the mood of the piece wonderfully too.

Deka,I love the idea of it too. I still have fifteen or twenty around here that I haven't read yet.

Greg, I rather liked that, especially since I didn't even write it myself. :)

Sage, it's the equivalent of what they used to call Horse Opera.

Paul, ahh, that could be. I didn't even notice that. Was too busy looking at the cover.

Mark, there's cool life in all centuries, my friend. :)

Tom, I'll take that curse as a compliment.:)

Sounds great! Can't wait to read it. Love the cover too.

Looking forward to this, I like the idea of brining back the double book. And thats a captivating blurb.

Shauna, this one is got a bit of your influence in it since you were telling me I should write a female action hero. I put her into Ember star, although there'll be one in the next Taleran novel too.

David J., thankee. Me too

Sounds like fun! Nice cover, too. Congrats on it finally being available. :)

congrats for the review.
it is interesting to see how long and how many books (i gather) it took to write a longer story with a protagonist of the opposite gender. i wonder about the reason, but anyhow, yay for you for streching :)))

Hmm. Just purchased Harmland but haven't gotten to it yet. I guess Under the Ember Star will go on the pile.

Good news is, I've been making somehead in my reading list.

How exciting! I remember when "Ember Star" was just a glimmer in your eye. :) It seems like only yesterday... how cool that it's a reality already!

I love the cover--the image is amazing and the font is very SF-ish.

Awesome cover, Charles! Those mountains under the mist/clouds provide a nice enticement for the potential reader to open the cover.

Very good cover, and an enticing excerpt! I think you will do well.

Szelsofa, it was a matter of learning my way as I went through it.

X-Dell, I'm falling behind again on mine. "Ember Star" was written well before Harmland. but I don't have much control about how they come out, at least not from Wildside.

Kate, yes, I remember that too, and it's great to see it come to fruition. Of course, you know what I mean.

Barbara, this one is pretty close to the landscape described in the book as well.

Great cover, great blurb, Charles. Ginn Hollis is an unusual name for an "ass-kicking" hero. How did you come up with that?

Prashant, I've had the name Ginn or Jenn in my mind for quite a while for a female character. When I decided on this character's relationship to her mom, the Ginn crystalized. I then spent quite a bit of time finding a last name that seemed to go with it. I did some looking through name lists.

I agree about the cover. It's terrific.

What a fantastic cover and idea- the double book thing. Love it.

Gorgeous cover indeed. This will be on my next Amazon order. . . .

Chris, hope you enjoy, man. It was a fun book to write.