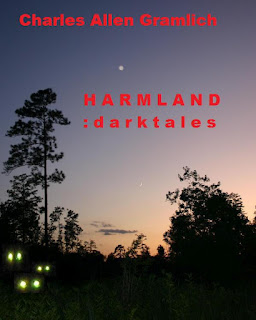 In honor of my newest collection, "Harmland," I'm gonna cook up a batch of Harmland Chili today. If you're in the Abita Springs area drop by and we'll have a heaping bowl with some dark beer. I’m thinking Turbo Dog is just about right with this kind of chili. And you won’t need any hot sauce.  Maybe I’ll whip up a batch of cornbread to go along with it. It’s great for sopping up the juices.

Here’s a little excerpt from the story, “The Finest Cut,” which inspired today’s chili recipe.
-----
Sheriff Dan Cortland stood looking down at the excavated grave. A coffin lay within, its lid thrown back. The coroner, Garrison Moeller, knelt in the dirt beside the grave, peering into the casket, which had been hand built out of thick cypress planks and seemed far too well constructed to house a couple of murder victims.

Moeller climbed heavily to his feet, then stripped off the pair of surgical gloves that made his thick hands and wrists look like grub worms underneath the latex. He gestured toward the med techs nearby. “You can move ‘em now. Straight to Longleaf Hospital.”

“Something strange about the bodies,” Cortland said.

Moeller snorted. “You mean besides the cut marks on the bones and the fact that sixty percent of their flesh has been removed?”

“Yeah, besides that.”
------
Remember: Harmland Chili: For when you absolutely have to kill the main ingredient yourself.
Get the Recipe Here. (Sort of: If you read between the lines.)

Posted by Charles Gramlich at 12:01 PM

That's what i call a beginning!

I am so wishing I were in driving distance of Abita Springs right now. The menu sounds delicious. And I definitely want to know more about those bodies in the coffin.

finished off the last of my own chili yesterday... smelly times... the dog did it, of course! lol

There's something besides that?

I enjoyed the segment you shared, but was wondering if a French name for the coroner--and for the dish--might be an option. Maybe your area is running over with Germans and chili makers, but I think of it as English and French--and African, of course. (I'm assuming that you're writing about your own area because of the name of the hospital.)

Abita Springs. By golly, that's two counties and one parish down (and one county over) from Lincoln County where I'm from.

Do you happen to know if the nudie camp is still there off the main road west of Slidell? I had a small plane (Cessna 150), and I flew down there once. I drove on another occasion, and have a good story connected with that, but I'll save it.

You might know of Dixie Springs on Hwy 51 north of McComb. There used to be an artesian spring there--I guess it still is--but no one ever made any money off it that I ever heard about. How long have you been in Louisiana, and where did you grow up?

Oscar, I'm a big fan of hot stuff these days.

Laughingwolf, One of these days I'll get back up your way.

Snowbrush, all my ancestors are German. There's a pretty good group of them down here in LA, and one makes a helluva deer Chili, though over all there's more more French influence certainly. I've been to Dixie Springs. I grew up in Arkansas, been down here since 1986.

You moved to Louisiana the same year I moved to Oregon. We probably passed on the highway.

Snowbrush, Northwest Arkansas, close to the foothills of the Ozark Mountains. Closest big town is Fort Smith, about 30 miles away. I grew up on a farm in a tiny community called Vesta.

And ... gasp! Just realized, Charles, you live near that Abita Springs, of beer fame. Not sure why I never put that together before, beer snob that I am.

Charles-Is it a murder mystery that you've got cookin'? Wish I could stop by-I love chili, cornbread and beer!

ty, oh yeah, some of the best beer around. I'm a huge fan of several of their brews, particuarly Turbo dog and their amber

Charles, I don't know about the chili recipe but your excerpt is chili-ing enough! "...his thick hands and wrists look like grub worms underneath the latex" — I like it when descriptions of characters and places are built into the narrative. I'm reading something similar right now.

Dude that was a great piece f writing but unfortunately i will not be able to make it to Abita Springs today (or anytime soon) but please let me know when you are just going to make the corn bread I loves me some cornbread.

Prashant, I was kind of proud of that line myself. I thought it was pretty good. Thanks.

Mark, I do too, and I don't put sugar in my cornbread. Man, hot from the stove with butter, ain't nothing better. WEll, almost nothing.

cool... would love to go to a pub for a few cold ones, and a steak sandwich... or whatever suits at the time :)

I love those added headlights. Just updated - haven't had a chance to read yet.

Jess, I've got several versions of the cover. This one didn't make it onto the final book but I like it quite a bit

Wow. I'm ready for the rest.

Charles Gramlich said...
This comment has been removed by the author.
11:46 AM

Damn, I hate that I missed the chilli and beer offer !