Milking the Beast Within, By Ben Douglass 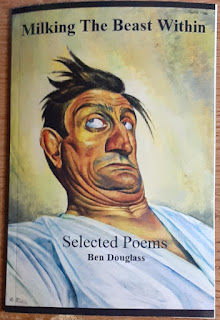 Milking the Beast Within contains thirty-seven poems spanning from 1971 to 2012. This is apparently only a small subset of the poems written by Douglass, who is a poet I’ve not previously read. While each poem seems intensely personal, all are also universal in theme, with the author addressing primarily the issues of relationships and love. The poems are free verse and written in everyday language. As a result, they come off as exceedingly honest.

I’m not widely read in poetry and have mostly read speculative poetry, which normally has SF, Fantasy, or horror elements. I did immediately recognize a certain kinship between Douglass’s work and that of Charles Bukowski. The plain language is similar, as are many of the themes. It was no surprise then to find that one poem in the collection is called, “On Reading Bukowski for the First Time.” However, the collection contains a number of poems written before Douglass discovered Bukowski and the same kind of language and content is found there as well. So, it seems less of a direct influence by Bukowski and more of a certain, common viewpoint on life. Still, I believe I found more hopefulness and peacefulness in Douglass’s work than I have previously in Bukowski.

The cover, called “The Acrobat,” was…intriguing. It’s quite an ugly image of a man, almost a caricature, but it does catch the viewer’s attention. I was surprised to find that it had been done in 1921. It certainly seemed contemporary to me on first look.

All in all, this is a very nice package and the poems are insightful and make one think. I enjoyed them and will likely reread them over time, as well as seeking out more of Douglass’s work.

Posted by Charles Gramlich at 3:21 PM

Not really into poetry. Interesting about the cover art. I would've have guessed it almost a hundred years old.