The Puppet Masters, by Robert A. Heinlein, 1951, New American Library 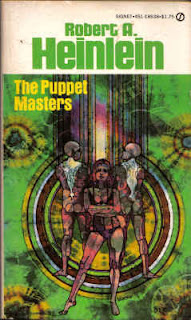 Most of you know that this is an alien invasion story, of course. A ship lands containing what come to be called "slugs," which attach themselves to the backs of people , through the spinal cord, and then take control over them. At first no one knows who is controlled and who isn't. But the human race soon comes up with countermeasures, such as having everyone strip to the waist. The war is on but there are many more twists and turns before the end, which I won't give away.

One thing a little different about this tale is that it takes place at an undefined future time after some great earthly war and after humans have begun to settle on both Mars and Venus. They have blasters and flying cars as well as space ships.

In 1994, there was a movie made from this book starring Donald Sutherland, but as I remember it was set in the modern day, without the futuristic elements. They don't necessarily have to be there to make the story a good one.

The slugs essentially appear to be single cells that function almost like a composite brain and I'm pretty sure this was a big influence on the Star Trek original series episode called "Operation Annihilate!" That first season episode featured single 'brain cell' looking parasites that rode the backs of people that they had taken over.  The similarity is too close to imagine that it was accidental. The episode aired in 1967.
Posted by Charles Gramlich at 6:00 PM

Read this 50 years ago and loved it. Glad it holds up.

I thought it was a great story and enjoyed the movie as well. Heinlein was a big influence on my own work.

Great little review and baited hook. Update the metaphor: Slugs = computer worms. S/F writers were often so much like prophets!

Read this one in the early 80s and reread it this past summer. Definitely worth the reread.

Read this one in the early 80s and reread it this past summer. Definitely worth the reread.

I had no idea Heinlien was the originator of the brain slug. I'll have to read this.

Bill, I really had fun with it.

Alex, I was telling Lana that we needed to watch the movie again. It's been a long time.

Keith West, I'm not sure how I overlooked it back in the day.

Charles, I spotted a few Robert A. Heinlein paperbacks at the Books by Weight exhibition I visited earlier this month but left them alone. Next time I won't.

I read a couple of Heinlein's back in the 50's or 60's, but don't remember this. Not much interested in scifi at the moment.

i read a lot of Heinlein many moons ago; i remember starting this one and quit because of being creeped out; still haven't read it and probably won't; i find myself reading mostly feel good books now, age kicking me into my second childhood...

Oscar, I pretty much always enjoy him.

I read it and really liked it when I was a teen. Isn't this the first novel mentioning alien takeovers of humans by attaching to some part of their body?

Bernard, I don't know. Might well be. I just read a very similar story in Planet Stories. Will have to look at the dates.

I read your first paragraph about slugs attaching themselves to the backs of people and I immediately thought Trek. That was also the episode where Kirk's brother died, right?

David, it was indeed.

It came to me the other day when I saw your blog again on my dashboard. I remember the first Heinlein novel I read had political and societal overtones I was immediately drawn to - The Moon is a Harsh Mistress. Starship Troopers was my next one. The Puppet Masters was the third. :)