Nick Carter: Web of Spies: Award Books, 1966. I picked up this early incarnation of the long-running Nick Carter series years ago but only now got around to reading it. This is volume 11 in a series that broke 260 volumes. The standard cover is below but my cover is different. It's purple for one thing. 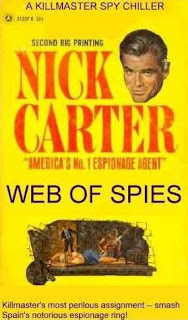 The header gives this away as essentially a James Bond knock-off. It’s “A Killmaster Spy Chiller.” The character is definitely a James Bond type, a lady-magnet with incredible skills but dapper good looks—when he wants to show them. In this particularly tale, Carter is supposed to save an English woman scientist who has knowledge crucial to all sides in the Cold War. The woman is a lesbian and the Russians have sent in a beautiful female spy to seduce her and bring her over to their side. There’s a lot of action and a considerable amount of sex, which is quite tame by modern standards but was probably pretty risqué for the times. The sex definitely puts this into the “Men’s Adventure” category.

This series didn’t list the authors but simply used “Nick Carter” as the house name. A little research revealed that this particular volume was written by ManningLee Stokes. Stokes was an accomplished pulp writer who wrote for many series, including the Jeffrey Lord series, of which I’m a fan. I’ve got half a dozen of his books in that series and have generally enjoyed them. Stokes wrote a number of other Nick Carter books as well.

Although competently written, this story didn’t do a lot for me and I don’t see myself grabbing another dozen of these for future rainy days. It’s just not my genre of reading choice. If you like this sort of book, though, then I’m sure you’d like this particular one quite well.

Posted by Charles Gramlich at 4:51 PM

I remember liking this one when I read it 50 years ago. I was a big fan of that series.

Thanks for the review, Charles. I'd tend to follow your recommendations

260. Amazing. Imagine very few would knock you out.

I enjoyed a few of his Killmaster novels, along with some of his other work, but overall, I thought he was a hit or miss writer, sometimes okay, sometimes not worth reading.

Not my genre of reading choice anymore. The irresistible spy is a bit annoying these days unless it is played for laughs.

Charles, I grew up on a steady diet of Nick Carter's Killmaster series but it no longer holds up for me. What I liked about these paperbacks back then was that I could read them inside of an hour or two.

James, I probably would have liked it more when I was a teenager. Especially the sexy bits

Tom, a couple of his Jeffrey Lord books are pretty good but none are outstanding.

Prashant, yes, it was a quick read.

In other words, it was a series with many authors?

Alex, yes, I saw over a dozen listed and I'm sure there were plenty more.

Going to Bouchercon, since it's right there in your neck of the woods?

Haven't read any of this series that I recall.

Richard, I'm going to a few things associated with it but probably not to the con itself.

Oscar, I think I've read another one or two.

Accurately described, my friend. I read the Nick Carter series in the service. They were an enjoyable dog-eared bunch of pulp paperbacks on the ship. :)

As you can probably guess, I'm into spy stories. I've heard of Nick Carter, although I've never checked him out.

BTW, there was a lot of interest in spy narratives (movies, TV, even rock & roll) in the 1960s following JFK's endorsement of the Ian Fleming novels.

Good review. I doubt I would find this interesting.

Bernard, they'd be perfect for that kind of reading I should think.

Sage, certainly not your typical read

Tapping into the Time Capsule. I have lots still that I haven't read yet, too.

Read a couple of the Nick Carter Killmaster books as a teenager. Thought they were crudely written. He treats women poorly. But they are a quick read.

Lohr, yeah, women are pretty clearly props in these stories, not real individuals