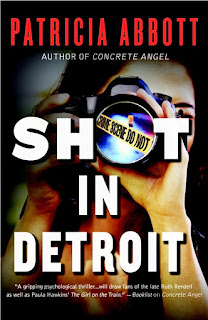 Violet Hart is the protagonist of Shot in Detroit. She's an almost forty photographer eeking out an existence in Detroit. As I am sure Charles Gramlich will tell you, writers are not always completely in charge of their characters. Characters are likely to take off and misbehave given the slightest opportunity. And from the very first with writing Shot in Detroit, Violet Hart, wanted to be an edgy, somewhat promiscuous, loner.  A pain in the ass to her friends and her creator. I could delete the stray sexual encounter in a gymnasium locker room, but darn if she didn't invite the guy home. I could write about her friend warning her about the dangers in meddling in gang warfare, but she was sure she had the situation in hand as she sped down to southwest Detroit. Drugs-I cut her down to one purchase. Enough to put the idea in a reader's head without suggesting addiction.

An agent wanted me to 1) change her name to something younger (little did he know that Violet would soon become a popular name  2) give her a female pal to hang around with 3) get rid of all mention of drugs 4) make her monogamous, 5) tone down her male friend's character traits (he's a gay, Latino, drug-dealing chef). "Surely, he doesn't need to be so...vivacious," he told me. "Who finds chefs interesting anyway?" Tell that to the fans of the Cooking Channel, buddy.

So what's wrong with Violet? Why does she have to be drawn to dark places and dark things? The reasons emerge over the course of the novel. Or some of them at least. But do we too often equate dark with evil? And especially in the case of women. Do we set a higher standard for them? You only need to watch the current political campaign to find the answer to that one.

Although Violet may make some questionable choices, none are evil ones. When push comes to shove as the cliché goes, she does the right thing. Like Weegree, the famous crime photographer, she is pulled toward the subjects that define her city. And in Detroit they are dark ones. Anything else would be hypocrisy.  Thanks for listening.

Posted by Charles Gramlich at 7:51 AM

An imperfect woman? Sounds entertaining and interesting and I'm sure it is. Best of luck with it.

Patti's guest post reads like a story in itself, intense and entertaining as Oscar mentions. Violet Hart sounds just right for "Shot in Detroit." Thanks, Charles.

Oscar Case, there may be a few around. :)

Thanks for sharing. "Like Weegree, the famous crime photographer, she is pulled toward the subjects that define her city." That line is great. Reminds me of a fave photographer of mine who also specialized in night cities: Louis Clyde Stoumen

Thanks, Charles' pals. And thanks Charles for giving me some air time here.

Hope it works out well for you Patti, and now that I have done a fair share of editing for others--I found that it's best to quit arguing after two rounds. The author usually has a better grasp of character ID and landscape than an editor anyway.

Mark, Yep, I generally think so

I already like this Violet. Very much.
Thanks, Charles and Patricia.