The last part of summer 2015 has been the driest period that I've experienced since moving here to Louisiana in 1986. We saw just how dry when Lana and I took a walk yesterday at the Abita Springs Flatwood Nature Preserve.

A creek flows through the Flatwoods, which is primarily a pine savanna. Most years in late summer, the creek is no longer running but still has one large, deep, long pool, and a few smaller ones. We had noticed a week ago how low the main pool had gotten and how shortened it was. Yesterday we saw that it was down to quite a small mudhole and were saddened to see a bloat of dead fish all around its banks. I imagine they simply ran out of oxygen. (The following pictures are not pleasant to look at, but you can click on them to enlarge them.) 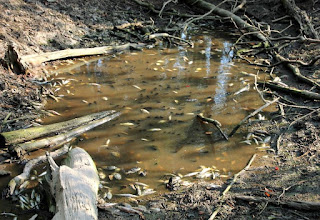 One thing you don't see in these pics, and I didn't know it was there until we got home and Lana started processing the images, is that there's a very much alive snake curled up under one of the logs. Last week we saw it catching what appeared to be a frog in the pool. You also don't see the numerous raccoon tracks in the surrounding mud. 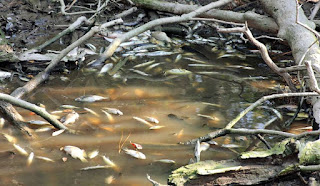 In some ways, even sadder than the many dead fish were the fifty or sixty small catfish swimming aimlessly around and around in the remnant. Mudcats are tough but unless we get some rain in the next day or so they won’t make it either. 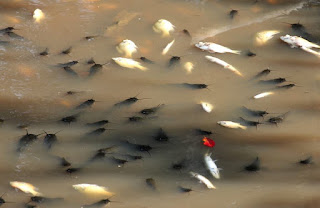 After seeing this, I walked about a few hundred yards along the creek and found not a single other pool. There were a few spots where the mud was still barely damp, but no other water at all.  The animals that come to our yard are faring better because in addition to food we’ve been putting out water each day. Still, I hope we get some rain soon.

Posted by Charles Gramlich at 8:36 AM

That's a lot of dead fish. They probably ran out of food as well. Wonder if it would be possible to move some of the catfish to a place that has water.
Raining here today. Wish I could send some your way.

Alex, that was one reason I looked up and down the creek, to see if I could find a big pool to move the catfish too. Most of the creeks around us are dry and I hesitate to move them into any private pond or lake.

Perhaps I am blinded by an unwillingness to see unpleasantness in events, but I see all of Nature in a larger frame, as a series of ebbing and flowing occurring in repetitions over millions of years, so I look at anecdotal evidence of frightening ugliness and reassuring beauty and as parts of the cycle. I think this is part of my Transcendental approach to the Divine, Nature, and Humans. Am I being too limited in my POV?

R.T., I know it is a cyclical thing and I saw this many, many times when I was in Arkansas as a kid. It still bothers me, though. But it's not something I dwell on. I know life will recover.

I wish we could send you some water as we've received plenty this summer!

I bet you are getting ideas for an arid planet series!

I never thought of Louisiana being dry, California yes after you get over the hump along the coast.

sage, I'm hoping this tropical storm will bring some.

Cloudia, Under the ember star!

Nice photo essay, Charles. I have seen similar scenes in my state which, in spite of abundant rains during monsoon every year (though not this year, so far), is prone to dry weather and drought. It's almost impossible to transfer shoals of fish to another pond or pool but it can be done with collective effort. This reminds me of the starfish story.

It's a sad situation. Such gratuitous suffering points to one of the reasons I'm an atheist.

Prashant, we've emailed the folks in charge of the park. I don't imagine there's much they can do either.

Charles-of course, I would hate to see that, but nature must have something in mind. It's been pretty dry here, too.

Jodi, it happens every year in some places at least.

That would make me sad, too. We have also had the driest, hottest summer on record here, and I worry about the wildlife. I hope you got some rain.

Riot Kitty, some potential rain in the forecast so we're hoping.

When your part of the country gets rain, it's a torrential downpour. We could sure use a nonstop rainy season out here too. Those are great pictures though.

Bernard, that is often true. when it rains it pours is not just a saying in our part of the country