For Forgotten Books Friday this week I’m looking at Tor Double Novel No. 8. This contains “The Nemesis from Terra” by Leigh Brackett on one side, and “Battle for the Stars” by Edmond Hamilton on the other. That makes this a family affair since Brackett and Hamilton were married.  Both books would be classified as space opera. They were originally published separately in 1961, and combined in the Tor edition in 1989. 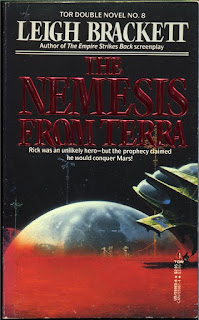 I read Battle for the Stars first, many years ago, and for my Goodreads review simply have the phrase, “decent space opera.” I read it as a standalone, probably checking it out from the small library in my hometown when I was a teenager, and obviously from the review I didn’t remember it all that well. It’s probably been over 40 years. I preferred the stories in Hamilton’s Crashing Suns collection, which I reviewed last week.

I discovered Brackett later than Hamilton but I’ve read more of her work and rate her as the better writer. At least, I tend to like her work better than Hamilton’s. Reading The Nemesis from Terra now shows me why.

First, Brackett had more poetry in her work than Hamilton. Here are some lines: “The winged ones drifted out from the white towers, and across the little racing moons. They were light and indescribably beautiful, and their wings shimmered with soft secret fires like opals under mist.”  I’m afraid I’m just a sucker for that kind of descriptive poetic language.

Second, while both Brackett and Hamilton wrote a lot of action into their stories, Brackett’s characters seem, to me, to have more heart. We see more of their inner thoughts and emotions. We see more things through their eyes. To make a comparison, reading Hamilton is like watching a movie, while reading Brackett is more like playing a video game. The video game involves you more directly in the action rather than letting you passively receive the information.

Brackett wasn’t an early influence on my writing, but has become one during my adult years, as I’ve read more of her work and have studied why I enjoy her stuff so much. She, and C. L. Moore, were particular influences on Under theEmber Star.  Here’s a particular little snippet of Ember Star that, perhaps, evokes a Brackett kind of feeling.

“The seven hovercycles Ginn saw hidden now beneath the overhanging bank of the dry river were typical of nomad machines. Low slung. Predatory. They seemed molded out of rust but that was only camouflage against the umber and ochre shades of the desert rocks. Ginn noted the hand-stitched seats of local leather, the exquisite etchings in black and red that embellished every metal surface, the displays of bone beadwork that dangled from handlebars and saddlebags.” 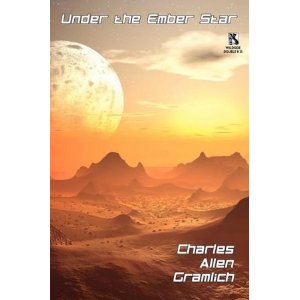 I like doing these forgotten book Fridays so I’m going to try to do a few more while it’s still summer. Once school starts, all bets will be off.

Posted by Charles Gramlich at 9:59 PM

Email ThisBlogThis!Share to TwitterShare to FacebookShare to Pinterest
Labels: Battle for the Stars, Edmond Hamilton, Leigh Brackett, The Nemesis from Terra, Tor Books Doubles, Under the Ember Star

I used to honestly like florid language too. Didn't much matter the book, it just seemed to roll around in the mind as I read quite nicely. Now though I want it straight, a bullet from the gun. Imagery should be hard and honest.

Mark, it depends on the story. I can enjoy both kinds of language. For nonfiction I certainly like it straight, but for fiction I'd rather have more. A good story with beautiful language is my favorite. Poetic prose can be as honest as any other kind. Often to me it is more honest because it gets at the experience from both an intellectual and an emotional level.

Neat tie in to Under the Ember Star, which I liked very much.

I'm going to plead "ignorance." What is "space opera"? What are your Rx for the best three or four S/O novels?

BTW, Beyond Eastrod -- like the scorched phoenix -- lives again!

Bernard, thanks. Glad you enjoyed.

R. T. Space Opera is Science fiction that is high on adventure with generally less emphasis on getting the science accurate. It tends to involve space battles and battles with blasters and that sort of thing. The analogy of the name is with Horse Opera, which is what they used to call westerns. Movie examples might help. Star Wars is very much a space opera. Star Trek has some space opera elements but leans more toward straight Science fiction.

In your review you say: "reading Brackett is more like playing a video game". Never having played a video game (since I doubt you mean Pong), that doesn't carry any meaning for me, sorry. I do like Hamilton's SF like the Ginger Star books.

...or was that Brackett?

I'll have to look for it then. Sounds like my kind of book.

Charles, I'm going to have to read some Leigh Brackett novels.

Under the Ember Star certainly can't be a forgotten book, can it, Charles?

R. K. Robinson, the difference between a video game and TV is that a game requires you to actively process and problem solve. A good game has constant puzzles and adventures where you are playing the primary role, whereas TV is about another person having adventures. Yes, the Ginger Star books were Brackett. Of course, Hamilton was her husband and I'm sure they collaborated on some things. But the Eric John Stark stuff was pretty early in Brackett's career.

Prashant, Outlaw of Mars is a good place to start if you can find it.

Oscar, well it's not old but I'm not sure it's not forgotten already. :)

I liked the TOR "reboot" of the old ACE Doubles format. But, surprisingly, the series wasn't very popular. Only 36 books in the series.

Thanks for the tips!

George, I loved the original Ace doubles myself. I didn't really hear much about the Tor doubles until after they'd stopped doing them. It was very much fun for me to have "Under the Ember Star" published in print as part of a "double" series from Wildside.

Nice review...though I think Hamilton at his best has a thoughtful High Lonesome quality JW Campbell also had in his best work. Meanwhile, I'll take issue with the characterization of space opera as further from the heart of sf than other kinds...it's more that it's the primary but not only adventure mode in sf, and its violations of current scientific models, when there are many as there usually are, are at least more forgivable than those in, say, a supposedly hard-science story featuring FTL travel, psi powers, or time travel into the past...and horse opera and space opera as terms come from the coinage of soap opera, of course...some sticklers like to note that gravity-bound space-opera-like adventure can often be "planetary romance" instead...

Nice review, Charles. Brackett was always one of my favorites. I got into her books while reading Burroughs way back when. In the 1950s I hates the Ace Doubles because I always ended up with copies missing the middle pages (sigh), but years ago collected all the Ace SF Doubles again, plus the TOR and Belmont SF Doubles. I have all but maybe one or two Belmont Doubles, and not really sure about that. Plus, a ton of extra copies of Ace & Tor for trade.

Todd, I tend to prefer what I call Space Opera over "Hard" SF if you will. I don't think I'd say space opera was further from the heart of SF. As you suggest, perhaps, it was sort of the original SF. Star Trek certainly crosses the line between Hard SF and Space opera. It's probably a "know it when I see it" sort of thing.

Tom, I don't have nearly all the ACE doubles but I'f got quite a few. Don't have the Belmont's and this is the only Tor I have, I think. I found a lot of new writers through the Ace doubles. I'd pick the book up because I knew the name of one writer, but then would read the other one when I finished the first. That's how I found "The Kar Chee Reign," One of my favorite early SF tales.