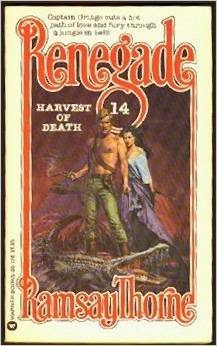 I'd never heard of this series of books until I stumbled upon #14 here in a small bookstore in Maine during a visit there. I snapped it up on the sheer audacity of the cover blurb, which read: "Captain Gringo cuts a hot path of love and fury through a jungle in hell!" I read that to Lana in the store and she said that I had to get it. To confess, the blurb had me at: “jungle in hell.” It was a month or two until I got around to reading the book but I rather enjoyed the "hell" out of it. I'd give it a good 3 and 1/2 stars.

These are billed as "adult westerns." They are certainly adult, with plenty of sex, but the settings for most appear to be in Mexico or South America. The one I read was set in Mexico and had very little in the way of horses and standard gunfights in it. Captain Gringo uses a Maxim machine gun throughout. There's plenty of adventure, and the sex is pretty mild by modern standards. These books were mostly written in the 1980s. They are fairly short books, standard length for this kind of series in those days. Mine was 190 pages.

After finishing the book, I did some checking and found that the author, Ramsay Thorne, is actually Lou Cameron, who wrote regular western novels under his own name. Cameron also wrote some of the Longarm series of Adult Westerns, which are more standard westerns than the Renegade series. One report indicated that he'd written 38 in the Renegade series but I could only find 36 listed on Wikipedia. I also found 36 listed at another site so I think that is the correct number.

Although I'm not particularly a fan of the adult western type books, this one was fun and had enough non-sexual action to keep me reading. There was a fair amount of humor as well so I will probably read some more of these. According to Wikepedia, here is the entire list of the series below:

my father in law loves westerns...and has read most of the renegade and longarm series...i think i may have read one years ago...

Brian, I've read maybe a half dozen of the adult westerns, mostly because they were by folks I knew.

Just the genre -- "adult western" -- has me imagining a curtained corner of bookstores in the 60s and 70s where "adults" could go to preview their forbidden pleasures. And, of course, the cover art is an even better sales magnet than any blurb the publisher could include. Ah, the good old days!

And your posting reminds me of a peculiar story involving one of my earliest jobs: typist (as a teenager) for an east European immigrant writer of American westerns. I can still remember being hot and bothered by a scene (written in crabbed longhand on notebook paper) in which an Indian maiden is at risk of being ravaged by bad guys until the squeaky clean gunslinger saves the day (and her honor). However, I have no idea if the writer ever published a damn thing. He at least had one reader: an impressionable teenager.

R. T., the cover art was definitely a draw for many. I've always been strange that way myself in which the blurbs hold far more power over my choices than any cover image ever could.

Charles, I am always wary of blurbs unless I have knowledge of and confidence in the source.

The "curb appeal" of cover art remains a dominant marketing strategy for publishers. However, we could probably find plenty of examples of cover art was not an accurate representation of what has hidden between the covers. We could also come up with many examples of dreadful cover art in some editions. I recall one 60s edition of The Moonstone (Wilkie Collins) that shows a ravishing beauty with bosom heaving while ghoulish (politically incorrect) figures in turbans reach out to her with their fiendishly bony hands.

I've never heard of adult westerns, but I must say looking at the cover, I probably wouldn't have picked it up... Interesting to learn about the setting (and they were written in English?) and use of weapons.

You might write a guide to this litt some day with your extensive knowledge!

R.T., yes I've seen some pretty egregiously wrong cover art. I know most writers don't write their own blurbs and I've seen some bad ones there too. I generally buy a book based upon reading the blurbs and backcover, and then the first page or so.

Sage, it's an American series. The Adult westerns were stories set in the western genre but with varying levels of sex in them. I always found the sex scenes rather perfunctory in the ones I've read. I've probably not read more than a dozen or so, and those by folks I know.

Cloudia, I've considered it. I might have to do that some time.

I suppose people would be surprised to know that many of the adult westerns had interesting non-sexual aspects to them. It's a shame people give such short shrift to the genre.

That blurb would have had me too.

RJR, I know several writers who have written them, because they paid decent money. These writers always tried to tell good stories and the characters and settings were often quite interesting. Personally, I always found the sexual aspects to be distracting from the story.

Vesper, it was fun. Very unrealistic male fantasy in places but still rather fun.

Good review. I've never heard of that series either.

Charles, I remember coming across "Renegade" paperbacks in used bookstores but never picked up any because I didn't know what to make of them. Next time I'll buy one and read. I enjoy reading noir/pulp paperbacks from the 60s through 80s.

You had me at Captain Gringo!

Methinks you need to share with us some of the "mild sex" so we can judge for ourselves.

Bernard, I bet there are others I've never heard of as well.

Riot Kitty, Captain Gringo in the book had a love of sex but tended to actually have some pretty standard views on what is good and bad. He tended to like missionary position sex the best apparently.

Sounds like an interesting series with a number of exciting titles.

Oscar, Yes, I'm gonna try to pick up a few more of these.

Charles, let me put you on the spot. I am interested in dipping my toes into the waters of western literature, a genre about which I know next to nothing. Give me a short list -- a sampler you could call it -- of half a dozen books that should be my starting point. Of course, Charles, I invite your visitors to offer their samplers. The more the merrier. But, Charles, if you would rather not get involved in this sampler solicitation, feel free to delete this comment. No hard feelings.

R.T. sorry I didn't see this comment until now. I'll post about this in the blog itself in a few days.

Guys, just to let you know that we at Piccadilly Publishing, have brought back the Renegade series in eBook format. Check out the dedicated webpage for Ramsay Thorne aka Lou Cameron here.
We also publish the Gunsmith series by J.R. Roberts - another "adult western" series. Not only republishing the Giant books in the series but originals from #400 onwards. check it out.