Elak of Atlantis, A Review 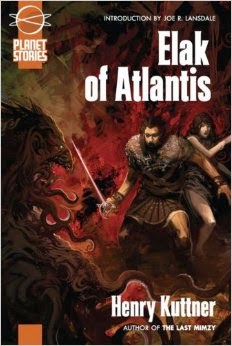 Elak of Atlantis, by Henry Kuttner. Planet Stories, 2007, with an introduction by Joe Lansdale.

This anthology of some of Henry Kuttner’s early work contains the four Elak of Atlantis stories that he wrote, plus two Prince Raynor tales. The Elak stories are: in order of first publication in Weird Tales, “Thunder in the Dawn,” “Spawn of Dagon,” “Beyond the Phoenix,” and “Dragon Moon.” The Raynor tales are: “Cursed be the City,” and “The Citadel of Darkness.” All these fall firmly into the genre of Sword & Sorcery, and they fit well together in this anthology because the characters of Raynor and Elak are quite similar. In fact, Elak just seems to me like an Older Raynor.

From what I had read previously to actually perusing these stories, Kuttner’s Elak tales were written in part to capitalize on the success of Robert E. Howard’s Sword & Sorcery works, particularly Conan. There is some clear influence there it seems to me, but these certainly aren’t pastiches of Conan, like the Brak stories of John Jakes. Both Elak and Raynor are far more cultured characters than Conan. Both are from the nobility. Elak certainly has some roguish elements to his character, especially where women are concerned, but neither Elak nor Raynor would be considered a loner like Conan. Each has a boon companion that travels always with them.

In fact, I see more influence on these stories from H. P. Lovecraft than from Howard. All the pieces in this book have clear “elder god” elements, and when I looked up Kuttner on Wikipedia I found that he was a big fan of Lovecraft and was considered part of the “Lovecraft circle.” That’s how he ended up meeting his future wife and collaborator, C. L. Moore, although the Elak and Raynor stories were written prior that joining.

The nice thing about the Elak tales is that they combine the eldritch elements from Lovecraft with the more action based adventure work of Howard. This makes for a fine pairing of elements, in my opinion. Kuttner could also pull this off prose-wise. Although I didn’t find his writing as beautiful or as dramatic as either Howard or Lovecraft, there were some very nice turns of phrase and the mood of the prose fit well with the stories. Here’s one of the nicer phrasings: “Piercingly sweet, throbbing almost articulately, a harpstring murmured through the gloom.”

All in all, I liked these stories pretty well. I understand that Adrian Cole has written a story or two with the Elak character, though I’ve not read them. These were entitled “Blood of the Moon God,” which appeared in Strange Tales, Vol. 4. No. 3., and “Witch Queen of Doom Island.” More can be found on this at Cole’s website.

Posted by Charles Gramlich at 10:45 AM

huh, will have to add this one to the list...i just hit the used bookstore yesterday and picked up some fun reading til my next grad class in december....

Kuttner is one of my all time favorites. I like these stories a lot and did individual posts on them a few years ago on my blog. Even so, they aren't Kuttner's best work. The science fiction he wrote with Moore in the 1940s is more polished.

Still, I'll take these stories over much of what's been written by others. They're fun and the eldritch elements, as you say, are a positive. And Kuttner was always trying to stretch himself as a writer, something you can see in these stories.

Brian, If you like this kind of stuff they are quite good.

Lovecraft was a unique character. . . .

Thanks for this thoughtful review-

I think I need to break down and finally read something by H.P. Lovecraft. Nice review btw!

Charles, I have read Lovecraft but not Kuttner though I have often thought of reading his work.

Prashant, his story, "Mimzy were the Borgoves," is a masterpiece.

In THE BEST OF HENRY KUTTNER, Ray Bradbury titled his intro: "A Neglected Master" and I think that's right. I usually think of Kutnner as an SF author, but looking back on some of his most notable stories (The Elak stories, "Mimsy Were the Borogoves," "Housing Problem") he was a great fantasist.

Richard, I came to Kuttner's fantasy before his SF but have enjoyed both. Sad that he died so young.

Not familiar with these stories or the author. Nice review though.

Oscar, not your cup of tea I imagine. Thanks.

Oh, this looks very good, Charles. I'll see if I can afford it this week and add it to my collection. Thanks for the tip.

I want the re-read the Prince Raynor stories. I thought they were really good the first time around. Good enough for Karl Edward Wagner to include them in the Echoes of Valor series.

This is a really nice review! Thanks for sharing.

Hee. It's just one big Mythos.

I just realized I have this, but have not read it, just shelved it when it arrived. Have to remedy that.