A Review of Blood Meridian, by Cormac McCarthy

I read Blood Meridian by Cormac McCarthy quite a few years ago now, and reviewed it at the time in various places. I never posted the review on my blog, however, so here it is: 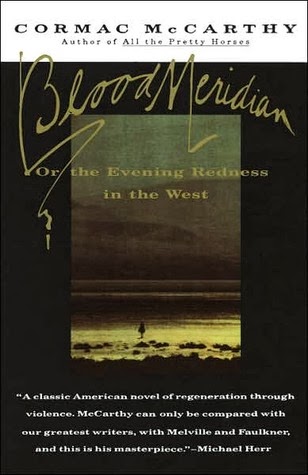 Book Review:  Blood Meridian: Or the Evening Redness in the West:  (Vintage, 1992, 335 pages). This was the first book I read by Cormac McCarthy. It is both beautifully written, and deeply flawed. The prose is often scintillating. McCarthy’s command of the language and his use of metaphor and vocabulary is extraordinary, enough to make me envious. On the other hand, the flaws (as I see them) often make this book a difficult read.
First, in the modern literary tradition, McCarthy attempts to make his book as inaccessible as possible to readers. He eschews the use of normal dialogue punctuation and often leaves out helpful speaker tags. There are “no” quotation marks to indicate dialogue and I was incredibly irritated by this. It smacks of elitism. I see no benefit to it and the costs are considerable. There were many places where it was difficult to recognize transitions in dialogue and who was speaking. The writer’s job is to make his or her prose as accessible as possible. Note, I don’t say “easily accessible.” McCarthy’s work almost demands rereading for the quality of his prose, his imagery, and his meaning. Why, then, make a sometimes difficult task more difficult by doing something as silly as leaving out quotation marks.
There were two other major flaws in this work, flaws that prevent it from reaching the level of artistry that it had the potential to reach and which the cover blurbs suggested it had obtained. First, and most critically, there is little “story” in this tale. I don’t believe story is the “only” reason for writing. I appreciate beautiful language and surrealism, but story is important and is needed to carry a long work like this. A book cannot be a masterpiece without story.
For the most part in this book, a young man, fourteen years of age when the tale begins and known only as “the kid,” wanders around in Texas and Mexico observing and participating in various acts of extreme violence. He has no goals (realistic perhaps but not particularly conducive to story). He simply survives one scenario after another with little more than animalistic reactance. His “will to live” may be remarkable, but when the blurbs say that this book should stand alongside Moby Dick I think they are wrong.
In Moby Dick, at least the character of Ahab had a clearly discernable goal--to kill the white whale. The Ahab character in Blood Meridian, who carries a touch of the character of the white whale as well, is known as “the judge.”  But the judge doesn’t even appear until page 79, and his motives are opaque, at least to me.
Another flaw, and one that strikes me as a major one in a “literary” novel, is that there is virtually no character development. This is perhaps understandable for the judge, whose personality is fully formed when we meet him, but it seems there should have been much more development for the kid, who ages by over a decade during the book. There is no “regeneration through violence” as the front cover asserts for the kid. He is the same at the end as at the beginning. The sheer weight of violence this boy witnessed and took part in would have been expected to have shaped his character. It doesn’t. He becomes neither holy nor truly debauched. In fact, his emotional reaction throughout is virtually deadpan. It’s as if he’s spent the years as a garbage collector, but without really getting any extra ‘stink’ on him.
Speaking of violence, Blood Meridian is, make no mistake, intensely and brutally violent, perhaps the most violent book I’ve ever read. The violence is constant and deftly handled, neither over dramatized nor too understated. There are certainly echoes of Conrad’s Heart of Darkness and such films as Apocalypse Now. Had the violence more clearly served the purposes of a story I would have praised it. Perhaps McCarthy’s point is that there is no glory or honor or redemption in violence, and he may be right. But that is hardly the stuff of myths. One aside about the violence in Blood Meridian is that I find it interesting that a level of violence that would, in a genre novel, be seen as “over the top,” is here considered masterful. Perhaps violence that has a point is suspect.
A last flaw in the book comes with the ending, though I’m sure many literary critics would disagree. Frankly, as with many literary novels, I didn’t understand the ending. When the kid stumbles upon the judge at the end, the judge embraces him and then.... What?  From the response of witnesses it was something rather horrible. I ’m just not sure what. Cannibalism?  Murder?  Sex? Clearly, Blood Meridian had an effect on me or I wouldn’t have gone on so long about it. It has passages of great beauty, and though I’ve criticized it I still find myself recommending it. I don’t think it is a great novel, but it does have power.
----
----

Posted by Charles Gramlich at 9:50 AM

I cannot tell you how many men I know who love this book but I have never been able to get past the first few pages.

Patti, I ended up reading it a few pages at a time because of the lack of story. But the prose was so lovely I kept coming back for more.

i have read other of his novels...but not this one...i will check it out for the prose but temper my expectations now...intrigued...

You're making me want to read this book, but I read McCarthy's "The Road" and am not a big fan despite the praises heaped upon that novel. Maybe I should give this author another shot.

Brian, the prose is quite excellent.

Ty, I liked the Road but it was much simpler as a novel than Blood Meridian. Very stripped down.

I love Blood Meridian for the prose sake and the idea of its over the top savagery, but yes there were some things that smacked of elitism that actually lessened its impact.

I disliked the way it ended, but that's true of nearly every McCarthy novel. We should have been given a better glimpse of what he did to kill the kid, because I'm certain he did.

Also, I'm absolutely positive that the Judge is supposed to be Cain, but so far as I know I'm the only one who has verbally said as much.

I'm planning a blog post myself about McCarthy's writing soon, I just watched "The Counselor" and as much as I like his prose his "story" element is worsening.

I "enjoyed" The Road and liked No Country for Old Men, but, yeah, the no punctuation thing is pretty gimmicky and annoying. He explains his rationale here: http://www.openculture.com/2013/08/cormac-mccarthys-punctuation-rules.html

David J., I don't think 'story' is nearly a important to him as it is to writers like us. He's an artist with painting images and characters but I wish there was more story.

The Wasp, I remember reading some of his justification for how he does the punctuation and stuff. I just don't really see it, though. I mean why not go with the standard? I liked both the Road and No country, and I have a couple more to read.

How can you have any novel without character development? P for Pass.

Charles, you've got me interested in Cormac McCarthy's work and particularly in this novel I've read so much about. I can get hooked to good prose even if the story doesn't match up.

I read the book, and you reviewed it exactly the way it struck me back then.

'One aside about the violence in Blood Meridian is that I find it interesting that a level of violence that would, in a genre novel, be seen as “over the top,” is here considered masterful. Perhaps violence that has a point is suspect.'

Riot kitty, I think series novels often times don't have a lot of character development because the character is fully developed at the beginning. The best ones still manage some.

Prashant, I still go back and read passages from the book just for the prose at times.

Bernard, on the violence point. Absolutely. I believe we are sympatico on that thinking.

The first chapter of this novel was on my Nook when I was looking for free books. It cost $11.95, but after reading part of the chapter, thought I was reading something like "Ulysses", and decided not to buy it. Maybe later.

Oscar, I got it in print. I don't remember the cost. A friend had talked about the book a great deal so I decided to give it a try. My opinion was harsher than his.

Charles-not my genre and I suspect I would also be irritated by writing style.

Jodi, I was a bit irritated myself.

With you, Charles. There are many horrible people in Texas and the world at large, and have been, we know that, yes. But ew.

You have it covered well. There are 'iron in your words' here and elsewhere.

Erik, lol about "the iron in my words." Much thanks, of course.

Man' s inhumanity to man is a theme already well-covered in fiction and film. I can't see what McCarthy is adding to the subject.