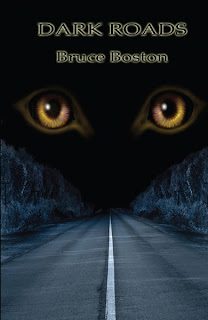 Bruce Boston has been writing for many years but I only discovered him about fifteen years ago when I joined the Science Fiction Poetry Association. I was immediately struck by Boston’s ability to evoke images I’d never experience before, and by his immense vocabulary and a talent for wielding words with the delicacy of an épée. Since that time I’ve eagerly awaited every new poem he’s released. I’d have no idea of the count of individual poems that Boston has published, but there are more than forty collections of his work. He has certainly been productive.

Recently, Dark Renaissance Books released a selected collection of  many of Boston’s best “long” poems published between 1971 and 2012. I’m not sure exactly how they define long poems but all the ones here are at least two pages of material. Most are quite a bit more. Some are certainly epic in length as well as scope.

As a result of this being a “selected” collection, I’ve previously read many of these poems. I believe this actually increased my enjoyment of them. Boston’s poetry is so rich that I’ve often found myself rereading his work anyway. The first time through I’m swept up by the imagery, which is always perfect but seldom what you expect, and by the joy of the word play. The second time I read for meaning, and though I’m not always able to extract a coherent meaning, I’m always left with a sense of ‘resonance,’ a sense that truth lies within if I but had the breadth of experience to grasp it.

It’s hard to pick favorites from such a collection, where every page holds gems, but I have to call out two particular poems, the multiple award winning “Pavane for a Cyber-Princess,” and “She Was There for Him the Last Time.” Here’s a fragment from “Last Time.”

I highly recommend any and all of Boston’s work. You can pick Dark Roads up from the publisher: http://www.darkregions.com/books/dark-roads-by-bruce-boston

You should certainly check out Boston’s website, where you can access some of his work online:
www.bruceboston.com

I’ll end with a quote from another poem in Dark Roads, “In the Short Seasons of a Long Year without You.”

This sheet of broken lines

Posted by Charles Gramlich at 11:14 AM

That cover draws one in, Charles. Thanks for the rec

Cloudia, anything by Boston is excellent.

That is prolific as hell....haven't heard of him before.

Charles, thanks for writing about Bruce Boston and his poetry, which I read occasionally. I wouldn't know where to start with contemporary poets and their work.

I was sampling some of his other books on Amazon Kindle in the previews. His imagery is incredibly good.

Riot Kitty, he's known mostly in spec poetry circles but has started getting some wider and well deserved recognition.

Prashant, I've got about a dozen of his books, I think. Perhaps a few more. Always enjoy his work.

I think I like horror in a poem or short story more than in a book. Thanks for the introduction.

Sage, most of his stuff is more SF than horror, although there are elements of horror. it's really a very mixed type of poem.

I'm certainly in the poem frame of mind. Duly noted.

Nice to see a poet get some attention.

I admire poets and envy them.

David, yeah, you should be able to find some of his poetry around and on his website.

Lisa, I can understand that.

Maybe, one of these days I'll get a real interest in poetry. Thanks for the post and links.

For me, reading poetry seems to require exercising a whole different part of the brain. I'm a little out of practice, too.

Oscar, I've been a fan since college and the discovery of Dylan Thomas

Ron, I think my own writing activates my imagery generating brain so reading poetry doesn't cause too much of an upheaval.

Excellent review, Charles! Thanks for that. The cover gets me too!