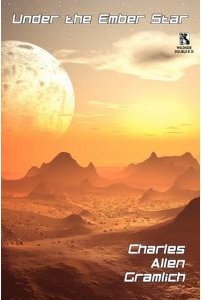 I've been very pleased to see that Under the Ember Star has been getting some really good reviews. The latest comes from Chris La Tray over on his blog with a post called Keeping it Pulpy:  http://chrislatray.com/keeping-it-pulpy/ Thanks, Chris.


Two things I'm particularly pleased with hearing about the book is that the setting, a planet called Kelmer, is rich, and that the main character, Ginn Hollis, is believable and sympathetic. The name of the planet Kelmer comes from an amalgamation of Kenneth Bulmer, who wrote some really great sword and planet fiction under the pseudonym Alan Burt Akers. Ken also wrote a lot of SF and fantasy as well. The planet of Kelmer, though, owes more to the works of Leigh Brackett, especially her Martian stories, than to Ken's worlds. I put a lot of effort into developing the Kelmerian landscape and societies and I'm glad it seems to have paid off.

Under the Ember Star also marks the first time I've tried a female protagonist for a long work. I knew I wanted to try it and was happy when Ginn Hollis leaped into my mind. She seemed just right for the setting and background, and I definitely want to tell more stories about her. I'm glad she seems to be resonating with readers.

Here's a (hopefully) funny ad I cooked up for Under the Ember Star.

FIRST CONTACT!  I’m sure you’ve heard of SETI, the Search for Extraterrestrial Intelligence.  Well, NASA has a new project out now called SETG, the Search for Extraterrestrial Gramlich. Even though they have been working on a shoestring budget of Cheetos and Beer, they got a hit in their first week of operation.  Less than a light year away, they discovered a novella by a “Charles Allen Gramlich” entitled Under the Ember Star.  Both a print version and an electronic version of the work have been detected using sophisticated infrared scanners and a fine toothed comb .  On the Beat for NASA, it’s Graham Charleston reporting for the Deerhaven Excalibur.  Remember, NASA owns space!

If you're interested in reading Under the Ember Star, it is in print (as a double with a military SF novel by Mark Burgess) and in ebook. Both are available at Amazon and Barnes and Noble.
Posted by Charles Gramlich at 8:41 AM

Email ThisBlogThis!Share to TwitterShare to FacebookShare to Pinterest
Labels: Chris La Tray, Under the Ember Star

Congratulations, Charles!
My second book was my first attempt at a female main character. They aren't easy.

How very cool and creative Charles! Gin Hollis is a great name!

Very cool, ideed! I must buy this soon. Probably in print so I can get the twofer. :)

I'm glad to hear you want to write more about Gin, because I want to read more about her.

I love writing male characters. It just feels right sometimes. Not sure if it works for a reader but I enjoy it.

Good one! Add that to the inside the jacket comments, Graham. :)

I haven't picked this one up yet Charles but I will remedy that asap.

Very kool! I love it.

Jodi, that was the hardest part of developing that character, coming up with the name. I knew I wanted Ginn but had a hard time finding something that seemed to go with it.

Tom, Battle for Eden has also been getting good reviews. I know I enjoyed it.

Keith, thanks. I think my next Ginn project will be a short story before I go back to the longer lengths. but I don't have the idea clearly in mind yet.

Patti, I enjoyed this. I've been cautious of it for fear I'd step on toes and it wouldn't be well received.

Aimless writer, thanks, I appreciate that.

Congratulations on the good reviews!
You ad is hilarious, can't be beat.
Btw, I always thought that NASA own Space. ;-)

The cover picture is fantastic!

Charles, I apologised for choosing that template that made it hard to comment. I have opened up the blog in a better template.

Merisi, have you watched Trailer Park boys? Yes, the cover is excellent.

Riot Kitty, thanks much!

Lisa, yeah, I couldn't figure it out except to reply on someone elses's comment.

Like to cover, it looks like the mountains around Phoenix yesterday after the wind blew all day. Enjoyed the ad, too.

Congratulations on the positive reviews!

I love the ad.

Well done, sir. Ursula Le Guin had an interesting experiment with gender in THE LEFT HAND OF DARKNESS by having a planet of humanoids whose gender would change from time to time.

Congratulations and if I ever need to bribe you, I'll remember Cheetos and beer!

Charles, I'm sure the good reviews are going to boost sales of UNDER THE EMBER STAR and I liked your ad a lot — it is, indeed, funny! It should go on your Amazon page.

Ron Scheer, the gender thing gave me fits in writing the story but it was an interesting challenge that I enjoyed.

Sage, Cheezits are preferred even. :)

Prashant, I need to think of ways to get those ads further exposure.

congratulations on the review!

That's a clever ad for the book. Made me laugh.

I always appreciate the care that goes into the cover design of your books. This one is especially evocative, exciting the imagination. It will bring you lots of new readers.