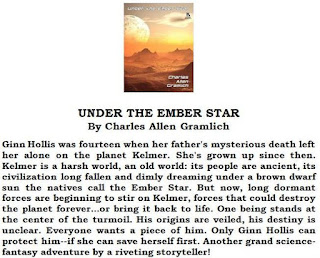 Under the Ember Star is out now in Kindle format for Amazon. It hasn’t shown up on Barnes and Noble for the Nook yet, although the print version is certainly available there.

Although in print it was published as a Wildside Double, with The Battle for Eden by Mark E. Burgess on the other side, the ebooks for the two have come out separately. I imagine it would have been a real pain to try to keep the “double format” in ebook.  Here’s a widget for Mark’s book in Kindle format if you’d like to check it out.

The advantage to the ebooks is price, of course. By separating the two and putting them in electronic format, the price has dropped to $2.99 a book as opposed to the $15.99 for the combined books in print format. Folks are talking about how ebooks are outselling print books. Well, I gotta believe a lot of that is simply about the price. I love print books and I’d certainly like to sell many copies of the works together in print, but $15.99 is pretty steep, I’ve got to admit.

As for “Ember Star,” I have to send a shout out to Shauna Roberts in relationship to the book. Shauna read and reviewed my Talera series, and interviewed me about them, and when I was working on the fourth one (which will eventually see the light of day) she made a comment about hoping to see a really strong female warrior-type character in that book. There is one in that work, but her comment also got me thinking that I wanted to try a strong female hero in something else as well.  Ginn Hollis, the main character from “Ember Star,” grew out of that thinking.  So thanks, Shauna, for the inspiration. Just below I’ve included a link to a fine SF adventure novel by Shauna called, The Hunt.

Posted by Charles Gramlich at 10:19 PM

No fair. You're writing 'em faster than I can read 'em.

Everybody is writing faster than I can read!
Is it in the iBookstore yet? Must check...

x-dell, this one was written last summer. I've slowed way down these days.

Alex, I don't know about the ibookstore. I'll have to have a look. possible not.

Charles, I hope UNDER THE EMBER STAR sells really well as an ebook. The price is definitely an incentive, I suppose. I don't have a Kindle or Nook yet though I'm pretty comfortable reading ebooks on the PC or laptop.

The price is a incentive. but i love the doubles in the Ace style. being honest. in any case, i hope you sell a lot ;)

Prashant, Yeah, it would be nice to see big sales. I keep hoping something will hit big, but so far not.

Deka, yeah, those are very cool and I was very happy to be a part of one of those.

As soon as these are available on Nook, I'm getting them.

E-books are definitely swarming into library collection development policies, too -- yes, because cheaper per item but also, much cheaper and easier to maintain over time (and in space).
Now as for wireless devices to read them on, they too, are starting to arrive in greater numbers.

oh Charles- congrats. I GOTTA E my book one of these days!!!!!

Keith, the Battle for Eden is available on nook. Ember star seems to have been delayed a bit. I'll let you know.

Erik, a lot of folks I know are starting to read them on phones. I haven't tried that yet.

Cloudia, it couldn't hurt. YOu should give it a try.

Congrats on the E-pub, Charles, and many sales, too!

Congrats on the ebook release!

Oscar, thanks. I hope it does well.

Golden Eagle, I appreciate that!

I think the price of an ebook makes me more willing to impulse buy, but I still prefer the tactile feel of a real book...and you can't beat paper's battery life :)

congrats on the Kindle pub! i agree with you about ebooks selling more because of the price. money aside, i'd certainly rather have a "real" book sitting on my shelf that i could hold in my hands.

David, it's in the "Vin of Venus" kind of framework.

Lauren, lol. That is true. And no pesky on and off slide.

Greg, I definitely think so. Ebook readers are nice for travel, but when you're at home there's nothing better than a real book in your hands.

Awesome Charles!! I'm going to buy my copy as soon as it is available at B&N because I just got a Nook and I love it! I love your writing so I will really look forward to this!

Ellen, it should be out on nook soon. I'll let you know.

If you came out with book books together in ebook form, would you have to flip your computer over to read the second one? heh!

That's "both books." A case of the fingers getting ahead of the mind.

Randy, it makes for an interesting picture!

This sounds great Charles. I know how good your fantasy fictions are.

Kate, cool, I appreciate it!


Where do you want to go?If you have not thought of it?Come here to see

Thanks for the shout out, Charles. Glad I inspired you to try something new.

Congratulations, Charles! Here's to many, many, many sales!

I wish printed books were a bit cheaper. I still love them more than the ebooks.

Vesper, me too. I really like seeing them up on my shelves, and see those shelves growing.