Tales of a Youthful Brewmance

Here's what the brews themselves are saying about Charles Gramlich's memoir of his beer drinking days. 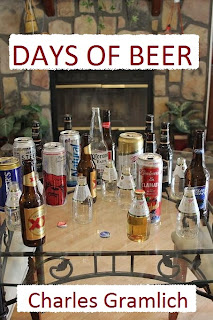 “I thought I could have been treated better,” says Bud Weiser.  “It hurts not to be loved.”
“Lies.  All lies,” says Coors.  “He drank a lot more of me than he lets on.  And he liked it.”
“Come back to Canada and we’ll Eff you up really good this time.”  --The Molson Brews.
“I don’t always like being drunk by humans,” says Dos Equis, “but when I do I prefer it to be by Charles Gramlich.”
“Only 99 cents, he’s charging for this.  Meshuggah!”  --He’Brew: The Chosen Beer.

Get your copy of "Days of Beer" today.  Before it goes stale.

Email ThisBlogThis!Share to TwitterShare to FacebookShare to Pinterest
Labels: Brewmance, Days of Beer

Very clever indeed! You really have the knack.

Paul, I got a good chuckle out of it this morning.

They get funnier as you read, and not because I've been drinking while reading.

"Before going stale" XDD That's a good one

Made me laugh, good one Charles.

Bernard, thanks, man. It was fun.

Laughingwolf, He'Brew is real. Lana found it for me.

Prashant, I did drink a lot of Coors, even though I give it a bit of a bashing in the book.

What a kick! Very clever! And FUNNY, too!

taste tells the tale, though ;)

Laughingwolf, I've never tasted He'brew, but I'm gonna have to look for it now. It was too good to pass up, though.

i posted more info on 'shmaltz brewing', makers of "he'brew", and more... award-winners!

That was a clever way of presenting your book!

Laughingwolf, cool. I'll check it out.

Golden Eagle, I don't think I got a wide enough audience, though. I only sold one book that I can see from the post. But it was fun.