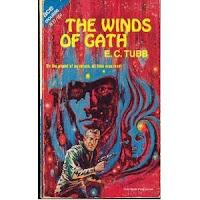 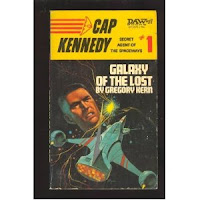 E. C. Tubb (1919-2010) was a well known British writer who wrote over 140 novels and hundreds of short stories under as many as 58 pen names. Most of his output was SF, although he also wrote fantasy and westerns. His best known series is the “Dumarest of Terra” SF series, numbering 33 novels. His best known pen name, at least to me, is Gregory Kern, under which he wrote 17 books in the Cap Kennedy Space Opera series.

I’ve read quite a few of each series, though slightly more of Cap Kennedy. Critics and SF historians generally consider the Dumarest series to be superior, but I have to admit that when I reach for a space opera I’m more likely to choose a Cap Kennedy than a Dumarest.  I recently tried to analyze why.

First, there’s no doubt that Earl Dumarest is a superior character to Cap Kennedy.  Dumarest has depth and we get to see his emotional ups and downs. He’s tough but vulnerable to love.  He has moments of doubt.  Kennedy is always focused and disciplined. He gets lots of opportunities for sex but turns them down because he’s committed to his mission, to protect earth’s civilization from its many enemies.  Kennedy is very nearly a superman, and is pretty clearly modeled after Doc Savage.  He even has a crew of associates, much like Doc, although his assistants are a lot more sophisticated and I like them a lot better.  Dumarest travels alone, although he often picks up a companion, usually female, during each novel.  You feel like you could be friends with Dumarest, not really with Kennedy.

Now let’s consider setting.  The settings for the Dumarest series are slightly more varied than for the Kennedy series, but in general there isn’t that much difference. In each case we have exotic settings in the space opera tradition.  There are desert worlds, ice worlds, etc.  The Dumarest settings often seem somewhat more realistic to me, while the Kennedy settings are more dramatically presented.  I think I like the dramatic presentation a little better.  Storytelling is so much about heightened focus on specific details.

The big difference between the two series is plotting.  The plots for the Dumarest novels are much looser.  The ‘series’ plot is that Dumarest is trying to find his way to Earth, which in this future history is so completely forgotten that it’s considered a myth.  The ‘series’ plot for the Kennedy series is that Cap is a kind of secret agent who travels the galaxy on missions to protect the Terran federation.  This means the Cap Kennedy series is more tightly plotted, with each story focused on a specific threat to the Federation.  The Dumarest stories, on the other hand, generally give lip service to the overarching issue, the search for Earth, while focusing on Dumarest as he gets involved with a particular character and some problem she (or less commonly, he) is having.  This means the Kennedy series has a lot more continuity from story to story than the Dumarest series, and that means less time needs to be used on set up and story development.  This allows the Kennedy series to get into the action much more quickly, and that is the main reason I prefer the Kennedy series to the Dumarest.

I appreciate the Dumarest stories and enjoy them, and actually wish I liked them better because I do really enjoy the character. But for just a quick, enjoyable read, I pick the Kennedy series.

Posted by Charles Gramlich at 9:10 PM

Interesting, I have pondered why I like some vaguely similar charcters more than others and you may have hit the nail on the head as to what it is-setting and plot.

I have a doubt: Dumarest finds finally the Earth?

I have never read E.C. Tubb though I'm certain I must have come across at least a few of his 58 pen names, certainly Gregory Kern which seems familiar. Thanks for analysing the Cap Kennedy and Earl Dumarest series: i have learned something new in the sf department.

58 pen names? Sounds like someone who should have been examined for some kind of multi-personality defect. How could he keep them straight?

Charles you have to stop recommending books---I fear you're turning me into a Trekkie or something.

I read the first of the Dumarest series about 12 years ago. I enjoyed it but never got around to reading any others. The Cap Kennedy series I'd not heard of. I'll need to check it out.

Charles, after you mentioned this post coming, I happened to go out on Amazon. All 33 Dumarest book are available as e'books now. (not quite as cheap as I'd like, $5.33 each, but they are available.)

They have been released by a new e'imprint, SF-Gateway. They are an imprint of British publisher Gollancz, who published the MasterWorks SciFi & Fantasy series. I had heard about the imprint coming, but I didn't know it was live.

Some of their stuff isn't available in US or Canada, but the Dumarest titles are. Hopefully, Cap Kennedy will get on their list, too.

Thanks for the post. I will have to sample some from both series myself.

I admit I am not familiar with either series, but from the way you describe them, I'd go with the Dumarest series because I want a romantic thread in a novel. One of the reasons I didn't like Doc Savage much was because of the nearly complete absence of anything like a romance. Great synopsis on both series though.

What's curious to me is that Tubb would set up two contrasting stories with characters that are almost foils of each other.

When asked which character in a play represented him, Tennessee Williams replied, "They all are."

Perhaps this demonstrates some tension experienced by the author: the acknoweldgement of personal death, and the vulnerability that results from that; vs. the desire to be "above it all."

i recognize the writer names, but not the characters...

David J., yeah, word choice is similar although the Cap Kennedy series has what feels like shorter scenes.

Deka, I don't know actually. I think he does in the last book but I'm a pretty good ways from there.

Prashant, we've probably both read some of his we didn't know was his, although you can find his works all listed at various places.

Sage, a lot of these guys who were professionals wrote under 'house' names, which were names assigned by publishers to certain series, and there might be a dozen or more writers writing for that series. Many pros spread it around a long ways to make a living.

Mark, there are worse things, my friend.

Keith, the first Dumarest I read was Spectrum of a Forgotten sun and it was really good.

Paul R., Let me know what you find when you do.

Bernard, that's one reason I don't like Doc Savage either, but Cap has a little bit more romance than Doc, but still not a lot.

X-Dell, as I understand it, the Dumarest series came first and was largely his own baby. He was hired to write the Kennedy series, which was orginally conceived, at least partially by the publisher.

Laughingwolf, I was starting to wonder, man.

I've never heard of this author before. Wow--he wrote a lot of books.

Great post. I've read about the Cap Kennedy & Earl Dumarest books but never actually read a one. (Which is also true of Perry Rhodan, another popular SF series). I guess I better get it in gear!

I've read a couple of the Dumarest over the years, not in order or from the beginning, but not any Cap books. I think I'll try to find a couple of them, just to try. Thanks for the tip.

Golden Eagle, must mean your young. :)

Richard, I've read quite a few Perry Rhodans. Not bad. Not as good as Cap Kennedy I don't think.

Richard R., I see them over at Abebooks for sale. Probably some are for sale through the Amazon sales too.

You always make me wish I'd invested time reading and learning about this genre. Interesting post. Made me think of the series romance novels and how they follow the same structure but some have more action and are more tightly plotted than others. I realized why I like some and dislike others. :)

I'm familiar with both characters, but I've never read the stories. I enjoyed this comparison essay.

Walking he floor these days, in a funk. The only Tubb I knew was Ernest and his song of that name, broadcasting late at night out of Wheeling, West Virginia, in the fifties.

But there were EC comics in these days and I must say, before the Senators got to them, there was fine science fiction produced, certainly horror.

Jess, yes, the genre rules. They're always there to be considered and I don't mind that at all.

Travis Cody, it was fun for me at least.

Ernest Tubb, the musician? I remember him from my days watching Hee Haw I believe. :)