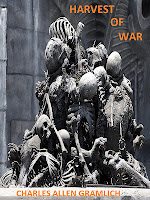 Well, “Harvest of War” was free for five days and there were 466 downloads in that time. Seems like a respectable number, but I’ve never done this before so I’m not sure how it ranks. I picked up some very nice five star reviews on Amazon, as well as mentions around the blogosphere, including Ty Johnston’s kind comments, here. Thanks, Ty.

In order to make it free, I signed up with Amazon select, which means it can be offered only at Amazon for 90 days, about 82 more days, I guess. After that I’ll put it up on Nook too. It’s way too early to see if this had any effect on the sales of any of my other books. The Talera trilogy is also fantasy and folks who liked “Harvest” might like those books. Closest to it in mood, though, are the stories in Bitter Steel.

This makes three items I’ve self-published for ebook:
1. Killing Trail, Summer 2010 – Has been a relatively steady seller each month, although in small numbers.

2. Days of Beer, December 2011 – Sold respectably the first couple of months and then has dropped to zero.

3. Harvest of War, April 2012 – remains to be seen, although I’ve sold one more copy since the free period ran out.

My experience has been that self-publishing is a useful outlet for stories and novella length material and collections. I don’t believe it replaces the need for or the pleasures of mainstream publishing, even at the small press level, and it appears to me that you have to have some kind of name, or you have to promote your ass off to make any headway with it. Certainly there are some amazing success stories. I’m not one of them.

I’ll continue to offer an occasional work this way. One of the pleasures is having complete control over every aspect, from content to cover. And it’s nice to be able to see sales results almost in “real time.”
----
---
Posted by Charles Gramlich at 3:45 PM

Only blame to yourself if something is wrong.but also all the joy only for you if all goes right ;)

I think it went pretty well, but I'm no pro, either. Congrats, baby and continued success!

Seems the key on a lot of this stuff is to get a bunch of other people talking about your stuff. I think you do a fine job of that. Of course the work has to be good . . . and yours has been excellent.

Charles, what do you get from Amazon for agreeing to give it away for 90 days?

I'll be interested to hear in a week or two whether your other books have had a jump in sales and whether "Harvest of War" continues to sell well.

Congratulations and keep up posted on how the epublishing is going.

Impressive accomplishments as is par for the course with you, Charles!

Chris, thanks, man. Glad you enjoyed it.

Jim, only that it can be given away free, and they will do more to promote it by including it on promotional lists and that sort of thing. I'll post more about that at some point.

Shauna, I'm curious about that myself. I'll let you know.

Keith, will do, my friend.

Hopefully all of your books will be on the iPad as well.
Even with a publisher an author still has to do a lot of promotion. (Although my publisher does a lot.)

Alex, even the biggest presses require a lot from their authors these days. I guess because there are so many authors vying for attention.

Always the americo vespucci in all this experiment/ adventure. We go on quests and then find what the lay of the land is on arrival.
I wouldn't mind 400 downloads. Truth is, I wouldn't mind 40 downloads. You have to promote and you do have a small press following. That's an accomplishment right there.

I think that's a pretty good number, Charles. This is the first I've heard about this because I've been crazy busy with the day job. I look forward to reading it.

Charles, do you have to pay Amazon anything for self-publishing your work? How does it work? A lesson on this, any time, will help. Thanks...

All the best to you and yours

Uhhh I went to download The Curiosity Shop by another author and remembered I wanted your latest book, I went there an lo now you know who one of the 499 free downloads were.

I am glad though because with both books priced the same you can honestly say that Gramlich is on par with Dickens. I will write a review when I read it Charles.

David J., thanks, man, and thanks for the review.

Mark, that's pretty good, I should say. Glad you got a copy. That's why it was there.

I am sure the day will come when your story will become an "amazing" one!

Merisi, that would be great. :)

If I am going to do this again, I need to find out how to get beyond people who know me because the sales are too small to be worth the effort.

Patti, that's the hardest part. Killing trail has been selling at least some to folks I don't know. Not so with "Days of Beer." Harvest of war, it's too early to tell.

Congratulations on the downloads!

I especially like Scott Oden's description of your "diamond-hard" prose. Right on.

Charles, that's a respectable number of downloads for a short story.

In my experience and from what others have shared with me, shorts are a tough sell in e-books, except maybe in erotica and some romance. Some might have other experiences though.

And "Harvest of War" was well worth my tiny plug. Thank you for writing it and making it available.

I went ahead and got it at the full price, as I don't expect a print version to surface any time soon. I have a Kindle reader for my Mac, though I've not had much luck reading a newspaper, magazine or book on screen. At least I have it, unless Kindle takes it away or something...

Ivan, yeah, I liked that too. Nice to be described that way.

Ty, I'm glad you enjoyed. I can imagine folks certainly don't earn a lot of cash with individual short stories at least.

Richard R., at least it's a short one. I read a few things on my PC kindle app, though prefer my regular kindle and find reading on it pretty easy. Thanks for getting the story. Hope you enjoy.

I'm pondering the self-publishing route, so this information is quite useful. Thanks.

grats charles, always nice to see your tips, too

on one of the groups on fb, i note some writers promote the hell outta their ebooks there, on a daily basis... it seems to help sales, dunno how much, but it all helps, one must conclude....

congrats on the good reviews!

thanks for sharing. one may assume (wrongly) that writing finishes off with the last editing procedure, but you (and i guess many other authors) prove the opposite. hm. :)

How did I miss Harvest of War? I'm over to buy it after coffee.

This one is next on my list after the book I'm reading now. I'm ready for a shift in gears after this current series.

Laughingwolf, I'm always torn between not wanting to be overbearing, but still making sure the word is out.

Szelsofa, no such luck, I'm afraid.

Rick, I hope you will enjoy.

Travis Cody, I'm feeling the urge to change my reading pattern too.