Lake Pontchartrain isn’t really a lake. It’s an estuary connected to the Gulf of Mexico. It’s generally said to be “brackish,” although parts of it to the north side are pretty fresh while other parts are heavily salty. It is the second largest inland saltwater body in the United States, after the Great Salt Lake, but, at 630 square miles, it’s the largest inland body of water in Louisiana. It borders New Orleans on the north side. I live on the north “shore” of the lake. On a recent photography expedition to the lakeshore, Lana and I stumbled up on a bit of a mystery. I’ll introduce it by asking a few questions.

Isn’t it possible, nay probable, that there are large creatures living in Lake Pontchartrain that are rarely seen by humans? Could some of these large creatures, under the right circumstances, be classified as monsters? Could such a said monster be, in fact, a relative of such other lake monsters as Nessie and Champie?

Could an intrepid photographer and her man Friday have caught a picture of said monster, who one might dub…Ponchie? Is said man Friday about to reveal said photograph right here on this blog? Does a bear **** in the woods? 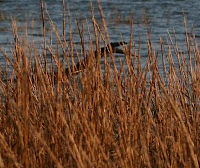 You will note the long snake-like neck, a common descriptive characteristic of other lake monsters. You will note the opened mouth. I figure Ponchie was about to pounce on a pelican, of which there were many around that day. You might argue that the photo is really of some mundane object jutting out of the lake bottom. To this I say: “Pshaww!”

One last question. Could Ponchie, perhaps, be able to spend time on land? Could he be responsible for the skeleton depicted below, which was found only half a mile from my house? Should I be afraid, very afraid? I know how I would answer those questions.

Whoa! It'd be really cool if that proved to be an unidentified creature.

As I have photographic proof that a bear does indeed shit in the woods (the jury is still out on whether said bear was Catholic or not, though), I say the answer is a hearty YES!

Flathead Lake, one hour north of here, which I used to live near and where my son learned to swim, has its own "Nessie" creature as well, which has been sighted and grainily photographed over the years.

I totally believe in this stuff.

Hmm. I like a forked piece of driftwood as well as the next guy, but until I see a picture that isn't grainy or partially hidden behind reeds, I'm going to have to tell you, you don't need to be afraid

Very funny. Very funny. Like it Gramlich. . .But if that neck isn't a big ole mad as all out Canadian goose about to bite someone, I'm . . .very scared.

Anonymous said...
This comment has been removed by the author.
10:44 PM

Have you phoned NASA, Charles?! They might want to take a look at this giant eel!

I love that ancient funnyman Jonathan Winters' riff on Moby Dick, about somebody saying to first mate Starbuck, "Still spend all day looking for that silly fish?"

Well, that there ovipraetor found on the bank looks like no fish.

It's got legs and it looks like it could run fast.

My little brother once said thislakemonsters have long necks because "is not a neck.Is the upper extreme of a periscope"

My opinion? If really is a unknown creature is interesting.if not... well, that's sad.

And,in any case, we'll always have the yeti ;)

Ogopogo is another of the lake monsters, this one in a mountain lake in British Columbia. Considering every inhabited continent has some version of this or another or in the case of North America, multiple claims, I would never bet against such a beast.

Ponchie, obviously named for eating too much NOLA food...

I'd say let's go for a swim...you first...just to test the waters as they say.

I will be the great non-believer saying it's a twig craftily shot with a zoom and at an angle. :D

Anyway, it would be interesting to share habitat with a monster and a bit mortifying should the monster feel neighborly. Ahem, ahem. :D

Yikes. We just have sewage in our bodies of water. Oh, and toxic chemicals. I'll take Ponchie.

Sidney, I'd love to get a real glimpse of such a creature.

Chris, I think there are very likely to be sea creatures we haven't seen. I love the idea of it for sure.

Ivan, I plan to defend myself if this creature attacks. I might use fire.

Deka, hum, periscope. I could see that.

Eric1313, there's got to be something giving rise to these sightings. who knows what.

Mark, hum, I think I'd be willing to swim around this creature.

Harry, maybe a twig off a branch of the dinosaur tree. or not.

Patti, yeah, Ponchie probably doesn't like sewage much, although maybe he's indifferent to it.

Bet it's a bird. Bummer.

Seeing as how Lake Pontchartrain is an estuary with connection to a larger body of water connected to an ocean, I say who knows what could have ventured up the waterway and enjoyed a lovely day on the lake?

After all, bull sharks have been known to swim up into rivers.

Well, Charles, if you'll pull that dead tree out of the water, we'll launch our boat and catch a few fish.

I love cryptozoology-if only because I like to think there are lots of things left to discover-I hope we never run out.

And Chris (since I am now back in Mt) I know a guy who had a run-in with the Flathead Lake monster, even though he absolutely hates to admit it; but he can't explain the leviathan-sized thing that brushed against him while swimming there.

Actually, you should be talking to Ray, of Ray's X about cryptozoological matters.

My first reaction is that it's something common and mundane--my first guess is something inanimate. I noticed forced perspective in the photographs, with nothing to suggest context (my Yankee eyes can't tell if that's grass, or tall weeds). Thus the object could be much smaller (my first guess) or much larger than it appears. Since I can't judge size by distance to recognizable objects (or even the lake or shoreline itself), there's no way to size it. And because there's no motion, there's nothing to suggest that it is moving.

I'm not much of a follower of cryptozoo, but I think it's indeed possible for multiple species to remain undetected by humans, especially in the water where we have limited opportunities to explore. Finding such creatures, however, would take a sustained effort. I'm not currently aware of grant monies readily available to academics who want to find Ponchie--or Champ, or Nessie, or whatever it is.

Alex, or perhaps a facsimile thereof.

Travis Cody, they have seen sharks in Pontchartrain for sure.

Oscar, dead tree! Surely you jest, my friend. Would I have had Lana take a picture of a dead tree? ;)

David J., that brushed against while swimming there gives me the serious creeps.

Cloudia, all depends on the angle.

X-Dell, I'm gonna apply for a grant, I think, and spend my next year on sabbatical "fishing" the lake for Pontchie!

If size matters, I think you're safe. Good story though. :)

I would arm myself to the teeth. Take no chances my friend! Everyone knows they only *disguise* themselves as hunks of floating wood!!!

Groovy scenes, to be sure. I'd want to know the scale, measurements, PoV, all that jazz.

In Bavaria, there was a shop in which the owners pieced together various skeletal parts to make all sorts of strange creatures.

Not that I'm overly skeptical -- anything's possible. For instance, once Pontchartrain's waters may have flowed all the way to Detroit; hence the Hotel Pontchartrain, which still exists and is sometime home of the Nain Rouge, the Red Dwarf . . .

Wow, that's a scary concept. That skeleton is really freaky looking. Chesapeake Bay up here in MD has its own legendary monster too, Chessie, with the same kind of long neck and head.

Erik, all is connected in the quantum world.

Greg, Josh and I found the skeleton near my house, thrown out on the road by someone who had killed and skinned it

Dog skeleton without the forelimbs.

Am I a party pooper or what?

And heck, Charles, I know you're already armed, at least at home. What's to fear?

Oh, wait, is that a zombie in the background behind Ponchie?

but yes, our own 'ogopogo', of lake okanagan, in bc, predates 'nessie', of loch ness fame, by at least 80 years... but, modest as we canucks are [most times] about our critters, she's far more famous than 'pogo :D

then there's our 'sasquatch', which you guys call, 'big foot'...

at least both of us call 'the windigo' and 'winibego' the same thing!

Laughingwolf, Wendigo. Haven't heard that name in a long time. I used to hear more about him.

It's your imagination that you should be afraid of... and it's delicious!!!
We can dream, we can dream...
;-D

Charles, if you find an institution willing to give you grant money for this, lemme know. I'll apply for the same grant and we can fish together.

OMG, Charles. The fact that you can post this tells me you are still alive. By the skin of your teeth, no doubt.

Where is the romance in my soul?

My first thought was, I got back legs, skull, spine and ribs-- who the hell stole that dog's arms??

Danette, yes, lucky I did not turn out to be Ponchie's trail mix.

Steve Malley, it tweren't me.