I’ve decided to do a few more interviews on my blog. These won’t be exclusive to writers, although that will probably make up the bulk of the posts. I don’t plan to make it a mainstay feature but I like learning about other folks and this will give me a way to do that. And maybe it will introduce those who visit here to some new writers or new blog pals. 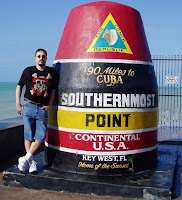 My first guest is the writer Keith Gouveia. I met Keith in an online writing group called “The Parasitorium,” which was founded by my good friend Del Stone, Jr. Del went on to publish a collection of stories from group members in 2003. It was called The Parasitorium: Terrors Within. I had a story in the collection called “Thief of Eyes,” and Keith had one of his early stories published in that collection, a nasty little work called “Taper.” Without further ado, here’s Keith. (RZ represents Razored Zen and I’m sure you can figure out what KG stands for.)

RZ: Keith, tell us a little about yourself outside of writing. Home town. Family. Job. That sort of thing.

KG: I grew up in Fall River, Massachusetts and now live in Florida. I’m married to my lovely wife, Lisa, and I’m a mechanical engineer in my off hours.

RZ: What made you want to write? Is it a desire that’s always been with you? Or was there some particular event or book that ignited the fire?

KG: Telling stories has always been my favorite pastime. Unfortunately, in high school, I had a Literature teacher who berated me over my topic choice when it came to creative writing. He would often assign homework to write freely, I would chose a horror story as that was what I enjoyed reading the most outside of the Hardy Boys and Conan stories, and he would give me a C with a handwritten scribble “this trash will get you no where.” No red punctuation markups, just his vitriol. The mental block he instilled in me wasn’t demolished until Lisa entered my life (eleven years ago) and supported my writing. Been going strong ever since. I write to entertain myself, and if I can do that for someone else then that’s just gravy.

RZ: Writers always get asked about their influences, so consider this that question.

KG: Edgar Allan Poe is at the top. Robert E. Howard and Stephen King are close seconds. I remember reading Poe and feeling his pain, it resonated with me as I shared his pain of loss and loneliness. I borrowed my mother’s copy of Stephen King’s IT and was thoroughly frightened, and was and still am in awe at Howard’s vision.

RZ: Keith, one reason I wanted to interview you is because, like me, you seem to enjoy writing in a variety of genres. I’ve read horror stuff by you, fantasy oriented stuff, and even materials that border on Young/Adult. Why is that? Is there a common theme or thread that you see running through all your work?

KG: I think it boils down to my reading habits when I was younger. I read various age appropriate material and a lot of not so much, and when it comes time to explore a story idea, I’m open minded and allow it to fit where it’s best suited. Plus, I have two great kids and I want them to be as well read as I was. Regardless of the genre though, I will always fit in a horror trope or two.

RZ: Writing can be hard work, especially when you’re slogging through the middle passage on a novel. What motivates you to keep going? What inspires you?

KG: Life inspires me. Combine that with my wife’s nurturing words, and I rarely hit that proverbial wall called writer’s block. Once I get going, I have the strong urge to see it to completion. Discipline is one of a writer’s greatest assets.

RZ: What are you working on currently? And what’s next for you?

KG: Right now I’m working on new werewolf short stories for a sequel collection to my Animal Behavior and Other Tales of Lycanthropy as well as finishing my zombie novel Death Puppet. After that, I’ve been writing a fantasy epic off and on titled Sword of Darkness, Sword of Light and I’d like to get back to that.

RZ: What work is available from you right now, and where can readers find it? Is there a place online where folks could go to learn more about you and your work?

KG: Right now, my most notable works are the aforementioned werewolf collection and my continuation of Edgar Allan Poe’s short story The Black Cat, titled The Black Cat and the Ghoul. It is a zombie mash-up ala Pride and Prejudice and Zombies, but rather than splicing zombies into the piece, I’ve continued the tale of a nameless character in Poe’s short story and turned it into book length in a way I believe true to Poe’s vision and macabre taste. But if you want Fantasy, check out my YA novel Children of the Dragon, all titles released by Coscom Entertainment and can be found at all on-line bookstores and can be ordered via brick and mortar stores as well. And to learn more about me, I have a website (though I’m terrible with updates) at http://www.keithgouveia.com or befriend me on Facebook.

Keith, thanks for visiting Razored Zen.

Thank you for having me. Until next time, “Pleasant Screams!”


Posted by Charles Gramlich at 8:53 AM

I enjoyed this interview. Nice to meet you, Keith.

Nothing like an evil Lit. teacher to squash your writing! You should send him a copy of your book.

It's always nice to be introduced to new writers. Good job both Charles and Keith.

David, I plan to run some more of these, particularly during the school year, I think.

Alex, I know, what a horrible teacher.

We definitely have similar reading tastes. Having a wife to support the writing really is a blessing. :)

Great interview! I'll have to check out Death Puppet when it comes out.

Excellent. A fan of Howard is a friend of mine, as far as I'm concerned.

Looking forward to more of these!

I loved this interview for a single reason: the mention to his wife. Wives, girlfriends... can be, and they are, a very big support to people who write.

Paul, Yeah, I thought many of my blog circle might not know much about Keith.

Bernardl, it is. I'm lucky that way now, but wasn't before.

Greg, it sounds interesting for sure.

Chris, I did a couple way back when but haven't done one in ages.

Deka, they can be a great help, or a hinderence for sure.

good stuff all round, youse guyz! :)

i had a math teach in highschool who physical abused me, ie. struck me in the back of the head, in front of some classmates... AFTER he had enjoyed perusing my cartoons... all BEFORE class began... i had a huge block to overcome, not in cartooning, but in math! GRRRRRRRRRR

Interesting interview--thanks to both of you!

Laughingwolf, I had a pretty bad math teacher to. Years later I realized she didn't know the stuff herself and that's why she tried to make her students feel stupid. Who knows how much wrong info I got from her.

Mary Witzl, it's a shame we have some really bad teachers, but yes, they can inspire us to prove them wrong too.

Lana, you are sweet.

Great interview, Charles/Keith -variety is the spice of life.

Just wanted to say thank you for all those who took the time to read and comment. Much appreciated.

Keith, I think it came out nicely. There'll probably be a few more comments tomorrow.

Throughout four writing workshops, I found the same attitude to genre writing. Yes, but you could write a better story if you concentrated on...

Being fairly new to reading fantasy and horror fiction I have to say so far I am 50/50 on how much I care for it or not. But in my unbiased moments I can understand how it does have mass appeal, who doesn't like peeing themselves as the images assault them?

Good interview Charles and glad to meet you via it Kieth.

Deka, my wife is a huge supporter of mine, as I am of her. I think we're both pretty lucky in that respect.

Pattinase, yeah, or sometimes folks used to tell me that someday I'd write something serious.

Mark, it's the rare literary writer that engages me. A story needs to have more for me than just human interactive drama and angst because I've lived those things and don't need to live them vicariously again. Genre fiction has the same stuff in it, of course, but usually has some other element that tends to better engage my imagination. I've had human interactions but I've never been to Mars or fought the devil. (Except in dreams, of course. ;)

Nice idea for a feature, Charles ...

Don, thankee. It seems a good thing to do. And fun.

Great interview, Charles and Keith. Thank you!
I find wonderful the way the presence of Keith's wife Lisa helped him overcome the block instilled by the awful teacher.

Vesper, yes, it shows we can all recover from the wounds we took as kids, though it sure helps to have someone who cares enough to believe in us.