A post just went up by me over at Rogue Blades today on "I Dream of Heroes." I only realized it went up this morning so if you get a chance, check it out. Below are two more reviews of books by friends. And it looks like something kind of cool is going to be happening this weekend. I'll let you know.

This is a novella length SF work by our blog colleague Rachel Olivier. A deactivated artificial intelligence unit that once ran a giant warship regains sentience. And it’s insane. It also thinks it’s God. And now it’s installed in a civilian ship rather than a warship, with a crew that is poorly prepared to deal with it. The event happens during the shift of a crew member named Monica, and she has to figure out how to get her fellow crew members out of an AI imposed stasis and retake the ship.

Good stuff. I might have actually liked seeing a longer version of this. It could be expanded to a novel, but I don’t know if there’s any plans for that. It’s definitely a quick read, well written, with a solid emotional core to the story. Rachel is a polished writer. I always recommend her work.

You can pick this one up at Sam’s Dot. 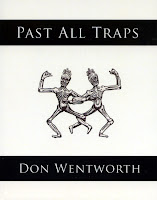 Past All Traps, by Don Wentworth:

This is a collection of haiku and other short poems, observations about the world and about life. It sort of combines Eastern and Western sensibilities. I thought it was very good. There are whimsical pieces and pieces that are much sharper and pierce.

My favorite, because it's so true: "While begging forgiveness, plotting my next scheme."

Email ThisBlogThis!Share to TwitterShare to FacebookShare to Pinterest
Labels: Don Wentworth, Past All Traps, Rachel V. Olivier, The G.O.D. Factor

The sci fi one looks like a nice and entertaining work. Yarsn dealing with IA are interesting, like this. i mean: If in the world described there is AIs... They could suffer mental illnes. is a concept i like

Deka, I haven't dealt much with AIs in any of my stories. maybe it's time.

Cloudia, Good stuff. I do read a fair amount of poetry.

Oops, I left this comment on the wrong blog. *sigh* I'm really glad you enjoyed it despite some of the typos I saw in there once it came out.

Rachel, I didn't notice any typos. but they are inevitable.

Charles, do it. I think can be really fun. Mostly, if you take a different way from the "Kill humans" typical plot.

Deka, that would be key, finding a twist.

Man I am way behind! Hi Charles.

Mark, me too, and that's just on friend's books.

Thanks for the recommendations!

Golden eagle, glad to do it.

Wow. That was quite the vivid dream! Reminds me of an old earth memory. I have vivid dreams too. Sometimes they are obstacle courses like from an old 80's movie. I'm being tested to see if I can make it. And if I can't I try to remember where my weakness is, and I'll re-dream the dream until I can complete it. I wake up exhausted. ;-)

Jodi, I sometimes don't sleep well because my dreams are so intense. I also wake up exhausted. It happens quite a lot.