Hint Fiction, and other Good Stuff

I am alive. I thought I'd post more regularly once the new year came in but I've been banging my head a bit trying to get these two reference articles done. Every project I do takes much longer than I think at first it should take. Lana tells me I'm a perfectionist, and maybe I am, though it doesn't often feel that way. Anyway, here are some updates on what I've been reading and listening to. Some of these are well overdue.

1. First, there's a nice review of Hint Fiction up online today, and it even mentions my story. I'm happy about that. It's over at Wilson Knut's blog if you'd care to have a gander.

“An excellent collection of poetry from a Detroit poet. Similar in many ways to his previous collection, "Stink." A range of poetry, mostly hard edged, and with a tinge of righteous anger overlying much of it. A good mixture of short and longer poems. I greatly enjoyed.” I’ll only add that Mark is a helluva poet with some important things to say.

3. I can't remember if I reviewed JR's book here, Adopted Behaviors, but I also gave it five stars and here's what I said on Goodreads.

“I don't have a bookshelf for Tomlinson's type of work. I'd consider it to be general literary fiction, but there is also some memoir in this collection. This is a 52 page booklet carrying the subheading of "Flash Memoir, Short Stories, & Flash Fiction."

I don't actually read a lot of literary fiction so I'm not the specific target audience for this work. I enjoyed this collection, however. Tomlinson draws vivid portraits of his characters and puts them into brutal but realistic settings. The characters certainly have the feel of realism about them, which means there aren't any clear cut heroes in Tomlinson's stories, nor many clear cut villains. Tomlinson himself has been a teacher in the prison system in Michigan for many years and the events and experiences he describes in his tales have the unmistakable ring of authenticity.”

4. I've also been remiss in reviewing a great new metal CD that I actually won in a contest over at Jodi MacArthur's blog. It's by a band called A Pale Horse Named Death. I'd call it melodic metal, but don’t take that to mean wimpy. It’s dark and heavy, but with a lot of polish and professionalism in both the licks and the lyrics. The band members have been around. I know a couple of them were in Type O Negative, which I’ve only lately started catching up with. If you check out the website link I’ve provided you can listen to a few songs off the CD to see what you think. 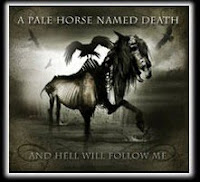 Jodi introduced me to A Pale Horse Named Death awhile back and I'm still enjoying it. I will check these other links as time permits.

never heard of this band... But a nice change for what i hear will be good.

Thanks for these reviews.

Off to read the one of Hint Fiction.

It's been awhile since I listened to metal with any degree of regularity. I've always preferred what you call melodic metal. I have a hard time appreciating music if I can't find and follow a distinct melody that takes me through the song.

I listened to some of the tunes from the link you posted. I see what you mean about them.

If you're interested, I have a fan page I'm linked to on Facebook to a metal band called "Nation of The Oppressors".

They aren't signed to a label yet, but they can be found partaking in a contest on Roadrunner Records.

Their page has quite a few links to sample their music from. The lead guitarist is very good, with a lot of music training and session work under his belt.

I hear you about the projects running overtime. Lately I feel like a one-legged man in an ass-kicking contest... :)

Travis Cody, yeah, I prefer melody at some level too. It needs to be intense but some kind of melody.

I liked your hint fic. :) I suppose the whole point is that there are different ways to interpret it. Me, I see it as a fantasy. Cool imagery.

I've always been mystified with what agents and publishers label 'literary fiction'. :)

Angie, definitely a fantasy image, I would say.

Lana, as long as you don't beat me up I'll live.

I checked out the APHND site. Pretty cool stuff. Good music to write horror stories by.

I would like to diversify the music I listen to. Same with books I read. But everything takes time and it takes time to learn to love something new. I am not sure I am ready.

Melodic like progressive rock? I'll have to check them out.
And I saw Type O in concert way back when. They opened for Queensryche.

Thanks for the reviews and links. I really like the band and I hadn't encountered then before. Excellent writing music for some of my work.

Evan Lewis, yeah, they've got a great intro to the CD, the sound of hooves slowly approaching

Ocean Girl, I branch out slowly, explore stuff that's closest to what I already like and then move a little further into new territory.

Alex J. Cavanaugh, I don't think I'd call it "progressive" rock. Heavier than that.

Charles, whoo hoo for my Detroit boys. I am honored and proud to keep their company!

Good reviews--I have a Shelfair page and mostly post book reviews here first then cop them for my page there.

Sage, I'm just routinely into recording mine on goodreads when I finish a book but I sometimes forget to bring them over on the blog. Or I'm just lazy. Maybe both.

I don't know how any of us get the "things" done we need to get done; too much expected of us maybe?

"That’s all for now. I suppose that’s enough." 8 words. Somehow they managed to say, "I'm busy. I have blogged, I could blog more, but I'm so busy." The only thing missing was a *sigh* (or the statement could simply mean that was all you had to say for now and you think that's enough - ha!).

I hope the reference articles will come to you easier and the head banging will stop.

pssst... Lana lives with you - she probably knows best :D

Thanks for all the links, plugs, etc.

I'm making a mental note of all of these, especially the poetry. Reading this post, I am reminded that I really need to read MORE. And I used to think I read a lot!

jennifer, Lana knows best, as she is constantly reminding me. :)

Patti, a bunch this day.

Mary Witzl, I'm reading more the last few years than I had for a while. It's nice.

You accomplish SO much!

Charles, very nicely done~ good luck with your projects and start ups. Yes, school is back in town, and it's no Satan's School for Girls, at least I don't think it is.

Groovy also on the Deroit crew. I may have to give Mark "Walking Man" D's latest a review shot, after doing Stink. JR's I did do one for also, and I concur with your take.

Charles, I loved yuor hint fiction piece. I bet those roses smelled good too.
APHND ~ "melodic metal" that's it exactly. Yuo just nailed what I've been trying to put into words for weeks. You have a tendency to do that. Your work is full of all these sneaky brilliant little phrases that capture an entire picture. Just awesome.

Cloudia, I definitely keep myself busy,

Erik, I saw that movie not long ago. Hilarious.

Jodi, thanks. I just realized how the first letters of the band's name spells out an easily memorable word (Offend) basicall. That's cool.

Carrie, I'm certainly enjoying it. Thanks for dropping by.

I was thrilled to see Wilson Knut point out your Hint Fic piece ~ very exciting!

Best wishes as you work on your reference articles. You are always busy, Charles ~ I suspect you've never been bored in your life :-)

Second Thank you. Coming from you, one I highly respect that means a great deal to me.

I have been falling behind lately but thank you.

good stuff charles... i can fully agree on mark's poetry, i have both volumes...

Kathleen, the only time I'm ever bored is when I'm at the mercy of others, such as when I'm trapped in a meeting with a small enough group that I can't doodle or write on the pad I always bring along.

Mark, not a problem, man.

Laughingwolf, yeah, I like that CD cover quite a lot.

I gotta get out more.

Charles, in my opinion, you scored BIG with the hint fiction anthology (there's some heavy hitters in there). Also, I believe Mary Witzl scored BIG with Creative Nonfiction's nod to her blog.

Thanks again for the mention. I definitely need to "ramp up" my game.