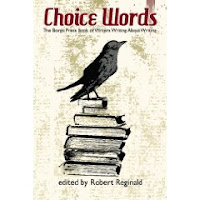 I finished reading Choice Words: The Borgo Press Book of Writers Writing about Writing. It’s from Borgo Press, edited by Borgo’s Robert Reginald. There’s an introduction by Reginald, as well as 19 articles on various aspects of the writer’s world. There are pieces on poetry, play-writing, collaboration, and translating. There’s an essay on writing sex scenes, as well as some tip pieces. The book reprints two of my pieces from Write With Fire, “Tipping the Odds in Your Favor” and “Writing with Purpose,” as well as a piece called “Preparing and Writing” from Writing in Psychology: A Guidebook.

I found a lot of food for thought in the collection and feel comfortable recommending it for anyone interested in writing. I don’t believe I’m being unduly influenced by having some of my own stuff in the book. I particularly found two pieces by Ardath Mayhar to be helpful and informative. These were “”Dispatch from the Front: Never Waste Anything,” and “How not to Starve as a Writer.”

I’ll relate an idea that I found very interesting in “Writing for the Stage,” by Francis Jarman. Now, I’ve never been much interested in playwriting but it’s a discipline I can admire. In this piece, Jarman, talks about the “duende.” The duende is one of three parts of an artist’s inspiration (the other two are the muse and the angel), as proposed by the Spanish poet and playwright Lorca. The duenda is “a dark, sudden, Dionysiac inspiration that rises up from sources too deep to be grasped logically… The duenda wounds.”

The duenda wounds. It pushes you to the edge. I like that. I think it’s important. And I think I’ve left my duenda dormant for too long.

Time for some darkness.

Sounds like an excellent ref and congrats on having contributions yourself.

Those razor-handed little kids in TEMPLAR? Totally popped up in a dream one night and just HAD to go on the page. Next thing I knew, they'd hijacked the role of Primary Badass. :)

I'll have to put this on my "to grab" list. Thanks

I'm always looking for good books on craft. Thanks for the recommendation. I'm going to pop on over to Amazon.

Charles, stop being so humble! Happy to hear that you seem to be ready to get back in the saddle.

the darkest parts of creativity have inspired many. Congrats on the book!

David, thanks. It was fun.

David J. West, I think you can get a look inside at Amazon to see whether you'd like it or not.

Christine, me too. I just got four writing related books in the last few weeks.

Heather, thanks. Darkness has always been in inspiration to me.

An apt title for writers, Charles. Writing reference books are always needed and congrats on your contribution it in.

An essay on writing sex scenes?? Keep that away from Stewart.

As someone who's written a lot of drama, I can vouch for the duenda.

As long as yoou don't impale yourself on the sword a few cuts are never a bad thing.

The duenda wounds. I really, really like this. I'll have to read more about this.

Thank you for the review. The book seems very interesting. And I think the cover is great. I love it!

Wonderful news on being republished.
I did use Writing With a Purpose for my business students, but this one was by a prof named MacCrimmon.

The duende is one of three parts of an artist’s inspiration (the other two are the muse and the angel), as proposed by the Spanish poet and playwright Lorca. The duenda is “a dark, sudden, Dionysiac inspiration that rises up from sources too deep to be grasped logically… The duenda wounds.”
Wow. I wonder what that rush was!
The duenda might be a dangerous phenom for a usually organized, intelligent person--which I am certainly not...Perpetual duenda.

I have a sex scene--several actuallly--in my play just up.
Maybe I should have read the essay on sex scenes, as both my poor lothario and this writer are awkward as hell. :)

Barbara Martin,Yeah, I wish I'd thought of the title.

Rick, it's graphic too. Almost pornographic one might say.

X. Dell, I've met mine a few times but we just passed warily in the night.

Mark, good point. I prefer to write about others being impaled, not experience it first hand.

Vesper, when I get a couple of moments I'm going to look up more about it myself.

ivan, reprints are often the most wonderful gift. More money for no more work. I've got a lot of sex scenes in something I'm working on now. I didn't realize I'd written so many.

nice all round, charles... i've always embraced my dark side as much as the other, wounds included

Without darkness, light has little context.
The best recommendation this book could have is your pieces in it.

Lana, I think you're right. The 'real' job that pays the bills.

Laughingwolf, I have as well. Someday I may relate those stories.

The darkness is always a popular study, especially if triumph can be brought about because of it.

Congrats, dude, and thanks fore the review, too. "The duenda wounds" pretty much gets at it all very nicely.

Bernardl, I think it's the intensity of the conflict that can ensue.

Erik, reminds me of Kirk saying, "I don't want my pain taken away. I need my pain."

"How not to starve as a writer.." I should get copies of this for several people I know.

Sage, I should write my own piece on that topic. Checking out my gut you can see I'm not starving.