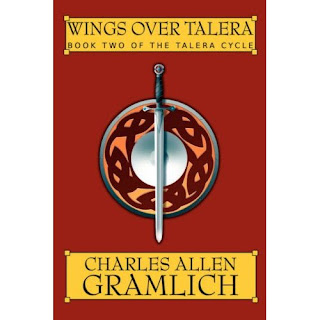 Well, faster than I thought it would, Wings Over Talera has been released on Amazon from Borgo Press. In keeping with the trilogy aspect, they used the same basic cover but with a darker color (Shown Above). I assume the third cover will follow the pattern. The link is here for Wings.

I might have liked them to publish the three books at about one a month, but I really had no say in the matter. It’s nice to have the book out, though. I’m very happy.

Although Swords of Talera was the transition book and needed to be published first, I honestly do believe that Wings Over Talera is superior. It’s got more action for one thing, and the stakes are higher for Ruenn, the main character. It was written when I was several years older and much more experienced, as well. The publisher used part of the back cover blurb that I wrote for the book, but the whole thing is below:

SWORDS OF SORCERY AND FATE

Talera is a world of warriors and heroes, not all of whom are human. It is a world where sailing ships ply the skies as well as the waters, and where beasts are as likely to hunt men as be hunted by them. On Talera, beauty and steel are equally dangerous weapons, and sorcery is the deadliest talent of all.

For Ruenn Maclang, an Earthman who has won a place on this mysterious planet, his sword is a constant companion, and battle a daily promise that is seldom broken. But what will Ruenn do when the battle is against the woman he loves, and against the brother he has lost? And what will he do when he’s faced with a deadly choice: kill his brother...or die?
Posted by Charles Gramlich at 9:30 AM

Congrats, Charles! We'll be putting in our order!

Congrats! Just put in my order

Wow, Charles, that WAS fast! I still haven't had a chance to read the first one! But hey, this is good - I hate to start a series then have to wait forever for the next one to come out.

Congratulations - this is wonderful news. :)

Susan, you'll just have to read to find out. Sorry.

Stewart, I know the feeling. So much to read and so little time.

Candice, Randy, thanks much. Hope you enjoy.

Kate, the wait will be for a forth one if I ever get a chance to write that.

the walking man said...
This comment has been removed by the author.
5:53 PM

Great news for you I truly am happy for you and this work of yours. Even if I haven't ordered a copy of either I am always glad to see someone ho has that goal of publishing en masse fulfilled.

Come to my house on the QT I'll grow a beard or something and fake like I am teaching your classes, I'll sit at your desk and write what I write while the class sits at their places and does what they do quietly for a semester and who ever made no sound at all to distract me gets the 4.0 and it goes downwards from there.

Education always loved the thought of it but shunned the practice.

by the by the press must think they have a hot one on their hands and want it out there. Hence the back to back publishing

Again way to be!
I'm really gonna have to get these books! They sound really cool! As soon as I can sae up a little money, we're kinda strapped at the moment, really sorry, I'll buy them. Most definatly. Keep writing! Keep kicking ass!

Lucas, I understand. At times I'm strapped, at other times am not so bad. I buy books when I can. It's not a problem.

Walking man, thanks, I'm actually pretty pleased at how well the two books have been recieved.

Wow -- how cool -- congrats! These are coming out faster than I can order ;) I very much look forward to reading them.

I am very fond of sword and sorcery.
Congratulations, Charles.

That is pretty fast, but it will be good to have all of them available.

Very exciting. I haven't gotten Swords from UPS, yet. But, you can be sure I'll collect them all. Congratulations.

Just finished "Wings" and thought it was better than the first one. I can't wait for the next one.