Nature: Red in petal and stamen 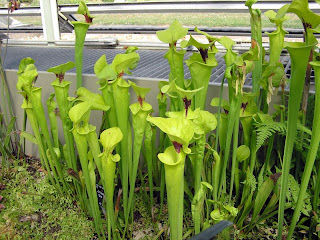 We camped out in our backyard again last night. It was nice and cool, even cold enough for a blanket in the night, and there were more stars than when we did this before because the moon wasn't up. I didn't hear the whippoorwills, though, and I guess they've moved on. I miss them.

This morning we went for a picnic at the park, and we found a nature preserve only a mile or so from our house. The preserve is trying to restore an area that is partially wetlands and partially long-leaf pine forest. There's a boardwalk through the area so that you don't trample the plants.

The coolest thing about the park was a large field virtually filled with pitcher plants. In case you don't know what pitcher plants are, they're carnivorous plants. An insect climbs into one looking for some nectar, slides down into a pool of fluid at the bottom, and is trapped and slowly digested. The picture for this entry is the North American pitcher plant. This is not a picture of the plants we saw today but this was the variety.

To see nearly an acre of pitcher plants waving in the breeze while they waited for their own picnic was rather eerie. There were also sundews in the field, which are another carnivorous plant. I imagined walking through that field as a man only a few inches tall. I imagined being in a world where humans were prey and the plants were the predators. It gave me a nice little shiver in the sun.
Posted by Charles Gramlich at 1:04 PM

Hi, Charles! Carnivorous plants, huh? Mama had what she called a "fly trap" plant that ate flies and tiny pieces of hamburger meat that she gave it. When it finally died, she decided that she had overfed it! Knowing my mother, she probably gave it a decent burial.
Donnetta

Neat looking plants. Don't think I'd like those in my garden, though!

Sex and vegetation, the combination gives me the willies.

Not exactly sure what Stewart mwant by sex and vegetation, espeacially the sex part, but in any case, that is sort of an eerie thing. All those meat eating plants! It'd make a great idea for a story, I think. Carnivorous plants stalking humans as prey.
Great post!

If meat is murder, what can we say about these plants? Perhaps we should ask a strict veggie.

I used to imagine being a tiny person and facing challenges from bugs and venus flytraps and such. Swordfights were involved.

Sounds like you had a night and day of the diversity of nature. the stars, God what a beautiful sight, i first saw on moonless nights in the middle of the Atlantic.

Meat eating plants always made me wonder how they reproduced if they digested their pollinators. had seen and heard of pitcher plants before but never got thoughts of being eaten or more specifically digested by them.

Ah, that explains why North America is not infested with leprechauns.
Thank you, Charles. Obvious - now that you've mentioned it.

Donnnetta, was your mother Italian? Constantly insisting that the poor plant, eat, eat.

CS, but I'm thinking they'd keep down the mosquitoes.

JR, a very good point. I'm going to bring it up with some of my vegetarian friends. Maybe it's, do as plants say, not as they do.
Steve, I used to have much the same imaginings. I think that's why I liked "the Borrowers" series so much.

Walking man, it was one of those days where everything is perfect.

Charles: Mama wasn't Italian. But she did run the local cafe'. So...at least she TOLD me she fed it bits of hamburger! Hmmm.
Donnetta

It's been done. "Day of the Triffids". Don't think it could be improved on.