My Sword and Planet recommendations were well received, so, to continue my Charles Recommends feature, I’m going to pick westerns this time.  Again, I’m limiting myself to one book per author. These combine my favorites along with books that I think somehow helped to define or expand the genre. Here are my top recommendations. Feel free to argue or offer your own recs. I’ve got more than five this time. There are a lot more westerns out there than there are Sword and Planet novels.


1. To Tame a Land, by Louis L’Amour: Although I have seen L’Amour slammed in recent years for his supposedly vaunted western accuracy and for the redundancy of many of his tales, he is still “my” favorite western author, and I’ve read just about everything by him. To Tame a Land wasn’t my first L’Amour, but it was one of the early ones. A young boy and his Pa get left behind in Indian Country. The boy grows up to be a gunfighter. It really engaged my imagination and I’ve reread this particular book more times than any other in my collection. 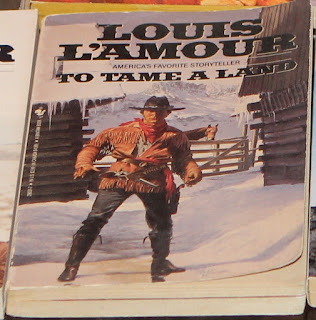 2. No Survivors, by Will Henry: This was the first book by Henry that I read, and I’ve never found anything else by him to match it. It’s written as an autobiography by a man named John Clayton. Clayton fought in the Civil War, then later was present at Custer’s Last Stand. He lived with both Indians and whites. Just a really fascinating tale with lots of historical connections. 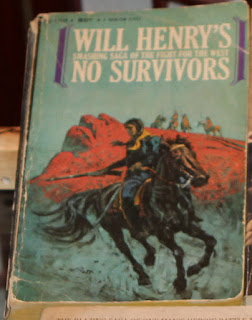 3. Dark Trail, by Ed Gorman: Gorman writes with equal ease in many genres but my favorite works by him are westerns. Dark Trail is #4 in his Leo Guild series. Guild is one of my favorite characters in western fiction. He’s older, more worn, but he rises to the occasion. This particular book has Guild helping his ex-wife save the man she left him for.

4. Apache Tears, by Robert MacLeod: A revenge novel, but one that rises above the standard. Powerful and emotional. It strongly affected me the first time I read it. One of my absolutely favorite non-L’Amour westerns. 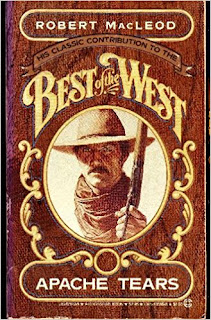 5. Doc Holliday The Gunfighter, by Matt Braun: This is the first Matt Braun book I've read but I immediately ordered two more. It’s a good introduction to his work. I liked it a lot. Of course, I've always been rather interested in the character of Doc Holliday. Although I don't know the specific history, I'm pretty sure Braun took a lot of liberties with Holliday's life. That's OK. I didn't read it as a biography. The character was well drawn and there were quite a few interesting developments. I did think the book was probably a little longer than it needed to be and sections of it were pretty similar to other sections. Yet, it certainly kept me reading. It actually ends before Deadwood and the shootout at the OK corral. I thought that would mean a sequel but apparently there is none. 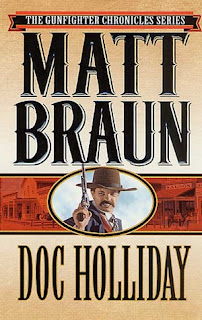 6. The Name’s Buchanan, by Jonas Ward (AKA William Ard): I only recently found out that the first six Buchanan books were written by a writer named William Ard. The seventh was started by Ard before he died, and finished by Robert Silverberg. The eighth was written by Brian Garfield and the rest by William R. Cox. I didn't know this when I first read through various books in the series and I judged all of them as by the same writer, not realizing that Jonas Ward was actually four different people. I went back to look at the works I'd reviewed in the series and found that I liked the Ard books considerably better than the later books by another author. This book was the first in the series, written by Ard, and is really a solid four-star work in my book. 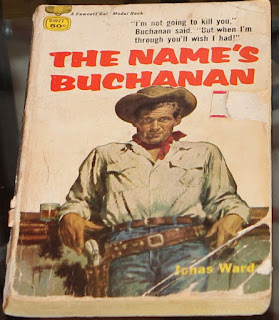 7. Appaloosa, by Robert B. Parker. This is the first book in the Virgil Cole and Everett Hitch series by Parker. I liked it very much. I actually read the third book in this series first, "Brimstone," and I liked it but thought it was very weak on description. This first one didn't have that problem. The description wasn't outstanding but it was pretty good and the book wasn't just dialogue, although there was a lot. I thought the action was better in this one too. Definitely a good reason to read the first in the series first. 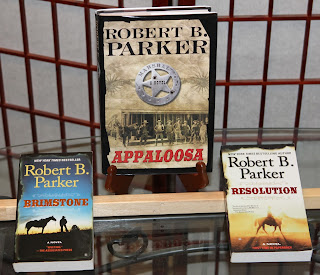 Posted by Charles Gramlich at 2:51 PM

Email ThisBlogThis!Share to TwitterShare to FacebookShare to Pinterest
Labels: Westerns

Cool, Charles ~ very helpful. My Dad loved these, almost every one so far as I know. I have about seventy of his Louis L'Amour books in my office.

I'm glad to see that Robert MacLeod made your list. He only wrote a handful of Westerns but they all are excellent. A very underrated author. APACHE TEARS is his best work, but his others are not far behind. (A few were made into movies)

I like Will Henry novels. I'll have to get my hands on NO SURVIVORS.

An interesting selections indeed, thanks for sharing!

Erik, I learned about L'Amour from my brother in law

August, I have a couple more MacLeod's to read. That one has stayed with me for 25 years. Flint is a really good one. I've read several others by Henry, No survivors is the best.

Blogoratti, thanks for visiting

GODLESS is terrific if you have Netflix.

Godless is a good one on Netflix. It'a wild and violent beginning. That's for sure.

Patti, I'll keep it in mind

Bernard, cool. That's 2 recommendations for it